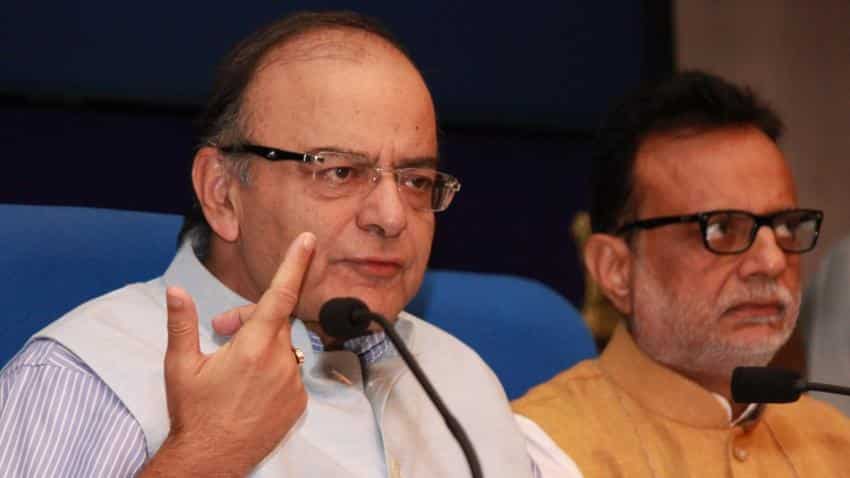 Jaitley had called the meeting to deliberate on options on resolution of stressed assets in the banking sector. Photo: IANS
Written By: PTI
RELATED NEWS

Finance Minister Arun Jaitley on Friday discussed options on resolution of bad loans with RBI Governor Urjit Patel and other top officials in finance ministry but creation of a 'bad bank' to hold such loans seemed not on top of alternatives.

Jaitley had called the meeting to deliberate on options on resolution of stressed assets in the banking sector.

While RBI was not in favour of giving more time to big ticket loan defaulters, the Department of Financial Services made a presentation on strengthening tools to manage NPAs and resolution of stressed assets.

"Lot of options were discussed for early resolution of stressed assets. RBI made some suggestions and these will be taken forward to and be given a concrete shape," a source said.

Although nothing has been finalised, but setting up of a bad bank to hold such loans seemed not on top of alternatives of the policy makers.

"We will have to weigh the pros and cons well before using tax payers money to set up a bad bank," the source added.

As on September 30, 2016, gross NPAs of public sector banks rose to Rs 6.3 lakh crore as against Rs 5.5 lakh crore at the end of the June quarter. This works out to an increase of Rs 79,977 crore on a quarter-on-quarter basis.

While Subramanian had earlier suggested setting up of a state-owned asset reconstruction company or a bad bank to deal with the problem of non-performing loans, it was Acharya who last month floated the twin concept of PAMC and NAMC for resolution of stressed assets.

Stressed assets make up 16.6 per cent of all loans in India, worst among the world's major economies. This has led to banks being reluctant to lend more. Bank credit growth hit its lowest point in nearly two decades in January.

According to some estimates, more than half of the top 100 stressed borrowers require debt reductions of 75 per cent or more, which only the government can force creditors to accept.

The PAMC plan, as suggested by Acharya, could be for sectors such as metals, construction, telecom, and textiles, where the assets will have economic value in the short run.

As per the plan, the banking sector may be asked to restructure about 50 large stressed exposures in these sectors by December 31, 2017.

The NAMC plan could be viable for sectors where the problem is not just of excess capacity but of economically unviable assets in the near term.