Finance Minister said there are 14 lakh POS machines which are there at retail level and this figure has to be expanded manifold. 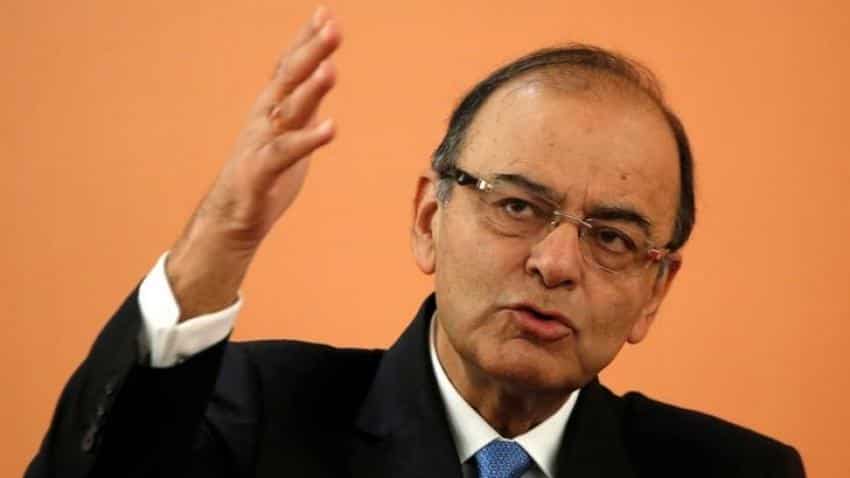 Jaitley said the politicians need to accept that habits of the people are changing. Photo: Reuters
Written By: PTI
RELATED NEWS

Finance Minister Arun Jaitley on Thursday asked banks to promote digital banking in "mission mode", saying the principal objective of the government's reform is to curtail the use of physical currency.

After a meeting with heads of banks including private sector, he said a committee under Additional Secretary in the Finance Ministry is being set up to promote digital banking.

Referring to the outcry over demonetisation in Parliament, Jaitley said the politicians need to accept that habits of the people are changing and they are frequently using cards for payments.

"Some of the banks have already had a lot of success, contrary to argument which is made within the political system that Indians are not well adapted to this mode. I think political life of India has to accept that right under our nose, people are changing as far as their habits are concerned," he said.

Giving out details of digital outlets in the country, the Finance Minister said there are 14 lakh POS machines which are there at retail level and this figure has to be expanded manifold.

These machines are not manufactured in India, they are imported, he added. "Additionally, with regard to banks' existing customers, debit cards and prepaid cards, e-wallets as well as mobile apps, are going to be utilised by them. They are ready with their infrastructure," he said.

Noting that one startling figure that came out in the course of meeting today is that there are already 80 crore cards in circulation, of which 40 crore are being actively used by people, he said this is a change which is already happening and therefore this has to be used as a great opportunity to further catalyse this change.

"One of the principle single agenda for the meeting was to expand digital banking itself...Objective of this meeting was to appeal to the banking system and prepare them in mission mode for expediting this entire exercise," he said.

Defending the demonetisation drive, the Finance Minister said one of the principal objectives of the reform that has been undertaken by the government is that physical currency must shrink.

In order to promote digital banking a task force is being set-up under Anil Kumar Khachi, Additional Secretary in Department of Financial Services, which is going to oversee this entire exercise, especially with regard to POS machines, Jaitley said.

Observing that there has been expansion in debit cards, e-wallets and other modes of transactions in the last few years, he said there has also been a series of mobile apps that have come up which facilitate payment.

"When we look at the figure we see that the change is already taking place and the present exercise gives us great opportunity to catalyse that change at a greater speed," he said.

So, the Finance Ministry has emphasised to the banks that this is a great business opportunity for them because a lot more transactions are going to come into the banking system, he said, adding therefore, they have to take it up with their existing customers and others on a mission mode.

In this direction, most banks have already begun a promotional exercise by waiving-up to end December MDR charges on debit cards, he said.

Besides, Indian Banks' Association (IBA) has been asked to promote digital transaction through advertising campaign including demonstration videos on how to use cards and other modes for cash less transactions.

During the video conferencing with heads of the banks, the Finance Minister exhorted lenders to restart normal lending activities and in particular Mudra loans as the rush at bank branches is now reducing.

These would help meet restocking requirements of enterprises by way of working capital delivered through Mudra cards, he added.

With regard to rural lending, Jaitley said, sowing season for Rabi and crops like potato is currently underway in many States.

"Necessary resources for the purpose have been provided by NABARD and daily releases to DCCBs (District Co-operative Banks) are a focus area of monitoring," he said.