The fifth meeting of the Governing Council of NITI Aayog was held under the chairmanship of Prime Minister  Narendra Modi at Rashtrapati Bhawan on Saturday. 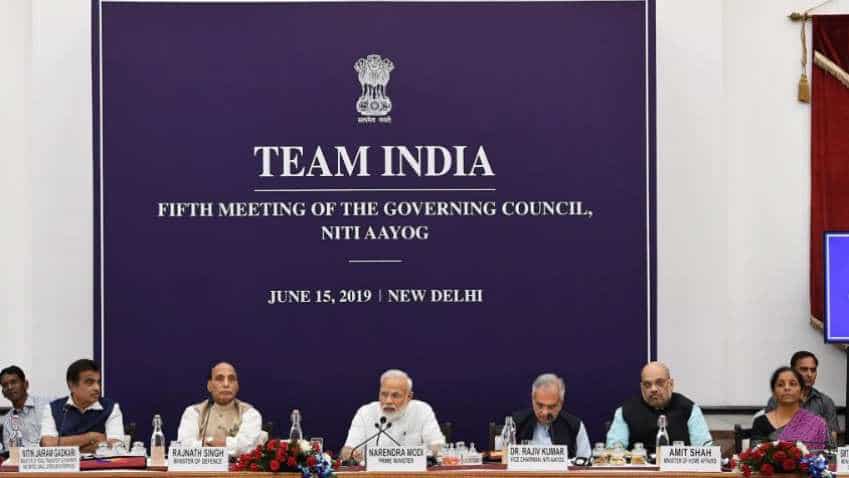 The fifth meeting of the Governing Council of NITI Aayog was held under the chairmanship of Prime Minister  Narendra Modi at Rashtrapati Bhawan on Saturday. It was attended by the Governor of Jammu & Kashmir, 26 Chief Ministers and the Lieutenant Governor of Andaman & Nicobar Islands, apart from Union Ministers, who are ex-officio members and special invitees. Vice Chairman, Members, CEO and senior officers of NITI Aayog also attended the meeting. Setting the tone of the meeting, the Prime Minister said this is the meeting of "Team India." The PM said that States should recognise their core competence, and work towards raising GDP targets right from the district level.

The Prime Minister highlighted the importance of the Governing Council of NITI Aayog as a platform to inspire cooperative federalism, stressing the need to collectively combat poverty, unemployment, drought, pollution, pockets of under-development and all such factors that constrain India’s progress. He said the goal is to realize the potential of this great country, to create a New India by 2022 and a USD five trillion economy by 2024.

The Prime Minister further said the need for every State to focus on increasing its share in the country’s GDP by evaluating the export potential of the State and determining the steps necessary for increasing exports and boosting employment.

Rajiv Kumar, Vice Chairman, NITI Aayog urged all States to offer their suggestions on the policy recommendations contained in NITI Aayog’s ‘Strategy for New India @ 75’ so that they can be tweaked to suit the ground realities in individual States.

Welcoming the constructive discussion and suggestions made by various Chief Ministers, the Prime Minister assured the Council that these suggestions would be seriously considered in the course of decision-making.

Agenda before the Fifth Council Meeting:

The Prime Minister urged all States to streamline and implement innovative water management measures. The creation of the Ministry of ‘Jal Shakti’ is a key step by the Union Government to develop an integrated and holistic perspective on water as a developmental resource.

It has been proposed that the Union Government consider developing a comprehensive drought management plan that can be applicable across States.

The Prime Minister also called upon the Fifth Governing Council Meeting to undertake foundational reforms in the agri-economy, leading to a complete transformation of the agriculture sector in India.

The Governing Council also reviewed the implementation of the Aspirational Districts Programme, which has emerged as a major policy innovation in driving inclusive growth.

PM Modi reaffirmed the commitment of the Government to combat Left Wing Extremism (LWE), noting that many of the aspirational districts are affected by Naxal violence. He assured the Council that the Ministry of Home Affairs will coordinate with all affected States to decisively end LWE violence and drive the agenda of development in these regions.

The Prime Minister urged those States who have not implemented PMJAY under Ayushman Bharat so far, to come onboard this scheme at the earliest. He said health and wellness should be the focal point of every decision.

The Prime Minister announced the creation of a high-powered committee on structural reforms in agriculture. He further said that global circumstances currently offer a unique opportunity to India.