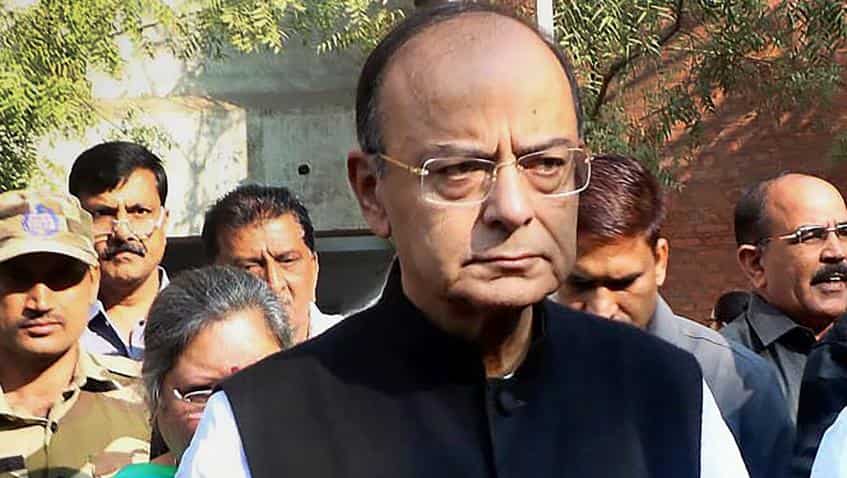 The report said that overall fundamentals of the economy remained strong for the Year 2017-18.

Manufacturing, electricity, gas, water supply & other utility services and trade, hotels, transport & communication and services related to broadcasting sectors registered growth of over 6.0 percent in Q2 of 2017-18 over Q2 of 2016-17.
Moody's Investors Service upgraded Government of India's local and foreign currency issuer ratings to Baa2 from Baa3 and changed the outlook on the rating to stable from positive after a period of 13 years in recognition of the Government’s commitment to macro stability which led to low inflation, declining deficit and prudent external balance along with Government’s fiscal consolidation programme

One year after the Demonetization, "High Denomination Notes been brought down by 50% of value in circulation, 50 lakh new bank accounts opened to enable cashless transaction of wages, 26.6% increase in number of taxpayers added from FY 2015-16 to FY 2016-17 and 27.95% increase in number of e-returns filed, the value of IMPS transactions increasing almost 59% from August 2016 to August 2017, 2.24 Lakh shell companies were struck off, undisclosed income worth Rs. 29,213 crore was detected and admitted and revenues of the ULBs across the country increased."

Constitution of the Fifteenth Finance Commission was notified on 27th November 2017 to look into issues of  distribution between Union and the States of the net proceeds of taxes which are to be, or may be divided between them.

The Logistics Sector was granted Infrastructure status in the 14th Institutional Mechanism (IM) Meeting held on 10th November, 2017 to meet the need for integrated Logistics sector development in view of the fact that the logistics cost in India is very high compared to developed countries.

Goods and Services Tax: GST is administered by both Centre and States and has subsumed several state and central indirect taxes such as State VAT, Central Excise Duty, Purchase Tax and Entry Tax; GST is bringing transparency and accountability in business transactions along with ensuring ease of doing business and rationalization in tax rates; GST has removed the hurdles in inter-State transactions resulting in the setting up of a common market; GST allows taxpayers to take credit of taxes paid on inputs (input tax credit) and utilize the same for the payment of output tax.

Demonetisation and Operation Clean Money: Income Tax Department (ITD) has been undertaking extensive enforcement action including search and seizure, and surveys largely based on the information received during the demonetisation period.

The Income tax Department conducted more than 1100 searches and surveys and issued over 5100 verification notices in the cases of suspicious high value cash deposits or related activities during 9 Nov 2016-10 Jan 2017. With these actions, the undisclosed income of over Rs. 5,400 crore was detected.

As part of the second phase of Operation Clean Money, ITD leveraged the information received under the Statement of Financial Transactions to identify 5.56 lakh new persons whose tax profiles were inconsistent with the cash deposits done by them during demonetization as of July 2017.

Subsequent to demonetisation, 91 lakh taxpayers were added to the tax net as of May 2017 as a result of action taken by the Income Tax Department.

In order to strengthen the banks, which are the key pillars of the economy, the  Government decided to take a massive step to recapitalise PSBs in a front-loaded manner, with a view to support credit growth and job creation entailing mobilization of capital of about Rs. 2,11,000 crore over the next two years, through budgetary provisions of Rs. 18,139 crore, Recapitalisation Bonds to the tune of Rs. 1,35,000 crore, and the balance through raising of capital by banks from the market while diluting government equity.

With the aim of using Exchange Traded Funds as a vehicle for divestment of shares to meet the target for CPSE’s disinvestment in 2017-18 set at Rs 72,500 crore, the government launched a new Exchange Traded Fund (ETF) by the name BHARAT 22 on 14th November 2017, managed by ICICI Prudential, targeting an initial amount of about Rs.8,000 crore.
Bharat-22 is a unique blend of 22 stocks of CPSE's, PSB's & strategic holding of SUUTI. Compared to energy heavy CPSE ETF, Bharat 22 is a well-diversified portfolio with 6 sectors (Basic Materials, Energy, Finance, FMCG, Industrials and Utilities). The strength of this ETF lies in the specially created Index S&P BSE BHARAT-22 INDEX and has been demonstrated in its performance from the time of its announcement in August 2017 wherein it has out-performed the NIFTY-50 and Sensex and raised about Rs. 14,500 crore.

General Financial Rules (GFRs), 2017 were released on 7th March, 2017 to enable an improved, efficient and effective framework of fiscal management while providing the necessary flexibility to facilitate timely delivery of services.

7th CPC - On 28th June 2017, the Union Cabinet chaired by the Prime Minister Shri Narendra Modi approved the recommendations of the 7th CPC on allowances with some modifications. The revised rates of the allowances came into effect from 1st July, 2017 benefitting more than 48 lakh Central Government Employees.