In the Budget 2017-18 speech on February 1, Finance Minister Arun Jaitley announced capital infusion of Rs 10,000 crore for the current fiscal. 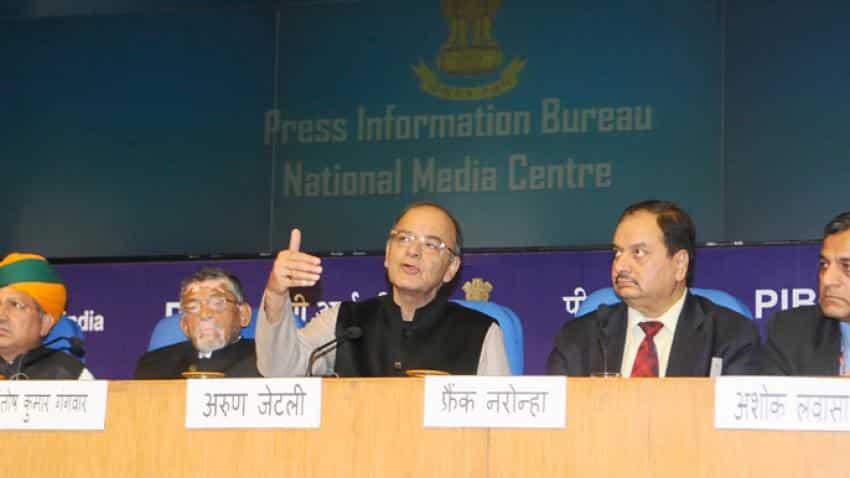 The BSE banking index has jumped to 24,700 from 21,600 in the past three months. Photo: PIB
Written By: PTI
RELATED NEWS

Stock prices on the mend, the Finance Ministry will nudge at least six public sector banks to hit markets to raise funds and ease the pressure on the exchequer of pumping in capital as per the Indradhanush plan.

"Time has come for banks to tap capital market and we think that at least half a dozen banks would take advantage of the opportunity and raise capital from the market during the current fiscal," a senior finance ministry official told PTI.

"It is up to individual banks to decide when they want to raise capital and how much, but in our assessment, there are a few fit candidates for this, including State Bank of India, Bank of Baroda and Punjab National Bank," the official said.

As per the scheme, public sector banks need to raise Rs 1.10 lakh crore from markets, including follow-on public offer, to meet Basel III requirements, which kick in from March 2019.

This will be over and above Rs 70,000 crore banks will get as capital support from the government. Of this, the government has already infused Rs 50,000 crore in the past two fiscals and the remaining will be pumped in by the end of 2018-19.

SBI has already taken board approval for raising up to Rs 15,000 crore through various means, including public offer and overseas issuance of shares, during the current fiscal.

The fund-raising will be done at an opportune time or as may be approved by the government and the RBI, it added. The BSE banking index has jumped to 24,700 from 21,600 in the past three months.

Meanwhile, the government will continue to support public lenders based on requirements as was announced by the finance minister in his Budget speech, the official said.

In the Budget 2017-18 speech on February 1, Finance Minister Arun Jaitley announced capital infusion of Rs 10,000 crore for the current fiscal.

"In line with the Indradhanush road map, I have provided Rs 10,000 crore for recapitalisation of banks in 2017-18. Additional allocation will be provided, as may be required, Jaitley had said.