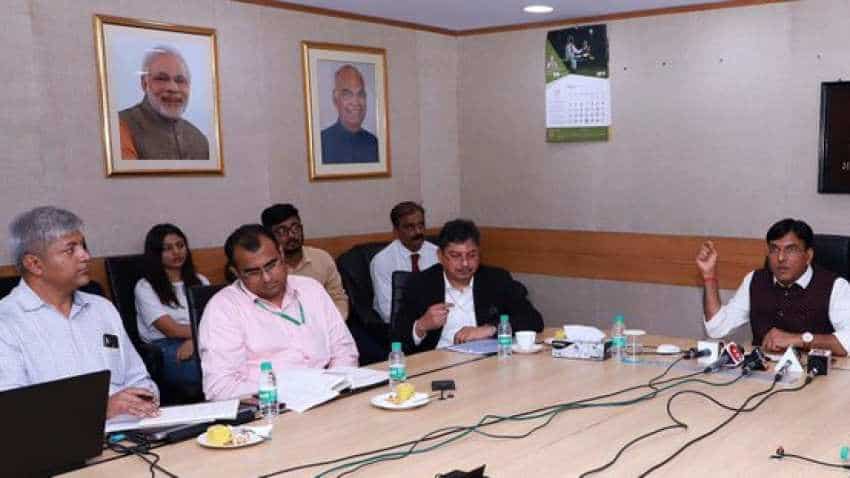 The BSID project has been taken up in collaboration with Centre for Development of Advanced Computing (CDAC), Mumbai. Image source: PIB
Written By: ZeeBiz WebTeam
Edited By: Arun Kumar Chaubey
RELATED NEWS

India has become the first country in the world to issue Biometric Seafarer Identity Document (BSID) to capture the facial bio-metric data of seafarers. The new facial biometric technology is a marked improvement over the two finger or iris based bio-metric data, with modern security features, according to the government statement. The new technology will make the identification of the SID holder more reliable and efficient, while protecting their dignity and privacy, it added. Notably, India had made a presentation on this technology at ILO.

Launching the project in New Delhi today, Mansukh Mandaviya, MoS (I/C) Shipping and Chemical & Fertilizers, also handed over the new BSID cards to five Indian seafarers. He said the country is moving ahead rapidly under the leadership of Prime Minister Narendra Modi.

"The shipping sector is seeing major developments in the areas of coastal shipping, inland waterways and other maritime activities. This is leading to generation of employment in the sector, which  is evident in the growing number of Indian seafarers in the international shipping industry," Mansukh Mandaviya said, adding "The total number of Indian seafarers who were employed on Indian or foreign flag vessels increased from 154349 in 2017 to 208799 this year, showing an unprecedented increase of 35%."

The minister said that today's development is very significant againt the backdrop of the increase in seafaring activities. The new document will give a foolproof identification to our seafarers which will facilitate their movement, provide ease of getting jobs and help in identifying them from any location in the world. Notably, the new card is in confirmation of the Convention No. 185 of the International Labour Organisation on BSID which India ratified the Convention in October 2015.

The BSID introduces modern security features, having a biometric chip embedded in it. "The security of the BSID card is ensured at various levels and through different methods. At the time of data capturing the live face is cross matched through passport photo using a face matching software. The card has two optical security features- Micro prints/micro texts and Unique Guilloche pattern. A software has been developed for capturing the facial biometrics and its authentication through the public key infrastructure," the statement said.

The BSID project has been taken up in collaboration with Centre for Development of Advanced Computing (CDAC), Mumbai. The government notified the Merchant Shipping (Seafarers Bio-metric Identification Document) Rules in 2016. The issuance of SID involves the collection of biometric and demographic details of the seafarers, their verification and then issuance of the card to them.