Faceless e-assessment scheme will be officially rolled out on Vijayadashami: Anurag Thakur

Steps will be taken to ensure that India emerges as a destination that attracts long-term investments says Anurag Thakur, Minister of State (MoS), Finance and Corporate Affairs, during an interview with Anil Singhvi, Managing Editor, Zee Business. 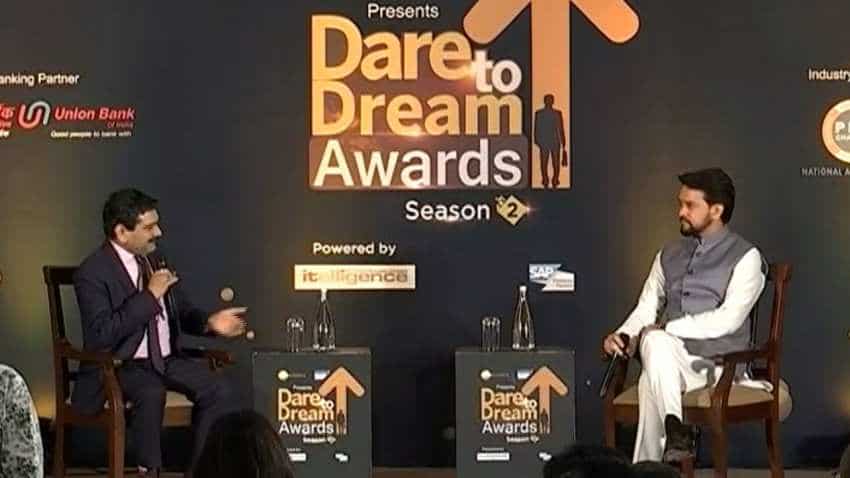 Anurag Thakur said, "faceless e-assessment facility for income tax will be officially rolled out on the occasion of 'Vijayadashami'". Image source: Zee Business

Steps will be taken to ensure that India emerges as a destination that attracts long-term investments says Anurag Thakur, Minister of State (MoS), Finance and Corporate Affairs. During an interview with Anil Singhvi, Managing Editor, Zee Business, Thakur said, "faceless e-assessment facility for income tax will be officially rolled out on the occasion of 'Vijayadashami'". Edited Excerpts:

Q: Prime Minister Narendra Modi at a global business forum has termed corporate tax rate cut as a beginning of reforms. Should we consider corporate tax cut as the first sixer by this government for the economy and five more sixes is likely to be announced in recent future?
A: The world rests on hope. When it comes to a country and its economy then it can't be limited to T20 match or an over but there is a need for a long inning or a Test match. India should emerge as a destination that attracts people to invest here, which in turn will give a boost to investment, industrial growth and employment opportunities. So, you should have long-term policies and free of a sunset clause to ensure that those who come here should be here with a long-term vision of what he/she can do in India. But, it doesn't mean that five more sixes will not be hit, it can be done.

Q: Do you have any plan related to income tax exemptions?
A: Corporate tax rate cut is a big decision and giving tax exemption of up to Rs1.45 lakh crore in a year is not a small thing, it is a big deal. But, it was done to increase investment in the country. As far as individual taxpayers are concerned, then it is our government who has raised the income tax exemption levels from Rs2.5 lakh to Rs5 lakh. I would also like to assure that if any further hikes will be done then it will be made by our government only.

Q: This is the first time in almost two and a half decades that the Reserve Bank of India (RBI) is worried about growth and it is working with the government in that direction. Do you think that there is a need for further rate cuts to benefit everyone including SMEs, MSMEs and big corporate?
A: I think it is the decision of RBI and whenever they feel it is an appropriate time for rate cuts than it should go ahead with it. But, if we have a look on the past five years in a true sense, then the inflation rates which used to stay between 11-12% during UPA regime was restricted between 23-3.5% in these five years. Thus, if we can keep the inflation rate under control, then possibly RBI will assess it. I think, it, RBI, also consider interest rates of the world and how our industries will compete with them while taking any such decision. That's why we must not put this decision in this discussion and let it rest in the hands of RBI, who takes appropriate decisions from time to time. However, if RBI has announced a rate cut of 110 points but the benefit of just 35 points has reached to the common man and now we will like to ensure how the benefit of the remaining part will reach to the common man at the earliest. And, for that purpose, a meeting of public sector banks was called. Apart from this, we will be conducting a big event at 200 places between October 3-7, 2019, where loans will be disbursed. After this, a similar, event will also be held in other 200 destinations. The government is ensuring that the taken decisions are implemented at the ground level.

Q: Any message for SME, MSME and corporate India to boost their confidence? Do you think certain reforms can be announced in the coming days?
A: The government take decisions at regular intervals for every sector. For instance, we thought there is a need to decide something on electric vehicles and then we reduced GST rates on it from 12% to 5% and chargers prices were brought down to 5% from 18%. If you have a look a few years back down the line then you will find that the previous government had made a big announcement related to the solar mission but nothing was implemented at the ground level. But after Paris agreement, PM Modi took its leadership in his hand which resulted into International Solar Alliance. On his return to India, he decided to set up solar power projects in India and we a record-breaking work has been done in that direction. For instance, the per-unit cost which stood around Rs6, around 3-4 years back, has come down to Rs2.25-2.35/unit and this has happened because its scale has been increased. Similarly, in case of tourism, PM Modi on August 15, 2019, independence day, urged people to visit 15 tourism destinations within 5years and then to support the call have slashed taxes on hotel rooms ranging up to Rs1,000/night, 12% tax on rooms ranging between Rs1,001-10,000 and above it people will have to pay 18% tax, which once stood at 28% levels. Thus, we are just not speaking but are also taking simultaneous decisions to support it and achieve it. We just not take decisions but also work minutely to get it implemented on the ground levels. That's why I have said that RBI will decide on the interest rate and we will ensure that it is implemented. Even, we will work to implement PM Modi's announcement on the ground.

Q: Update us about the steps that the government is taking to increase transparency between bureaucracy and corporate?
A: I would like to give 2 examples (i) On August 23, we said that the GST refund arrears of past 2 years of every account holders will be processed within 30 days and I am happy to inform you that arrears of Rs10,753 crore, which was pending of which around Rs9,700 crore has been returned till date. We have also said that GST refunds of the MSME sector will be made within 60 days and we will ensure that it happens. (ii) We have also said that we will launch the faceless e-assessment facility under which the taxpayer remains faceless to the taxman will be officially rolled out on the occasion of 'Vijayadashami' this year. We want your pre-field income tax returns to reach to you and we are working on it. We are also working to simplify GST returns and would like to request every business person to give suggest changes that will help you. We are quite open to hear and implement them to ensure less time is spent on it. But, would like to say that few people are paying tax in this country don't you think that its scope should be increased? For instance, about 50 business people from my Lok Sabha constituency came to meet me when GST was rolled out and angrily they said what has been rolled out and as soon as 25 left the room remaining were appreciating the move. And when I asked why they answered these 25 were those who don't pay taxes, nor income taxes or any other taxes and we are not able to compete with them. It will be a level playing field for us and then we will see how much they earn. Thus, an honest taxpayer is still standing with him and I salute them who are contributing in taking the country ahead. So, I would like to ensure you that we will have a discussion on your suggestions and take correct decisions as an honest taxpayer must not suffer.

Besides, we have worked to reduce the number of cases in indirect taxes and have done the same thing in income tax as well. In the process, the limit of Rs20 lakh has been increased to Rs50 lakh and Rs50 lakh has been taken up to 1 crore. This has been done to ensure that maximum cases are decided before reaching to the court and any of us, yours and the government's, money is not stuck in the process. We don't want litigation with the industry. Less litigation or no litigation should be the dream and we are moving in that direction, where none of us will have to invest our money in the name of lawyers without waiting for years. So, take the best out of these steps.

Q: Few cooperative banks have been in news from past few days and at such a time, will you like to give some message to the deposit holders of the bank to boost their confidence and they must not fear?
A: There is no need to be worried because RBI is looking into the matter. As a regulatory, it has a responsibility to make sure that there is no problem in the bank in terms of working and neither their customers have to face any issues. And, I am very confident that the bank regulator will take make a fruitful decision on it.

How much government spends on advertisements in newspapers and channels? Find out