Train 18 all set to revolutionise Indian Railways and replace the Shatabdi trains with its High rated safety, security and Passanger amenities features. 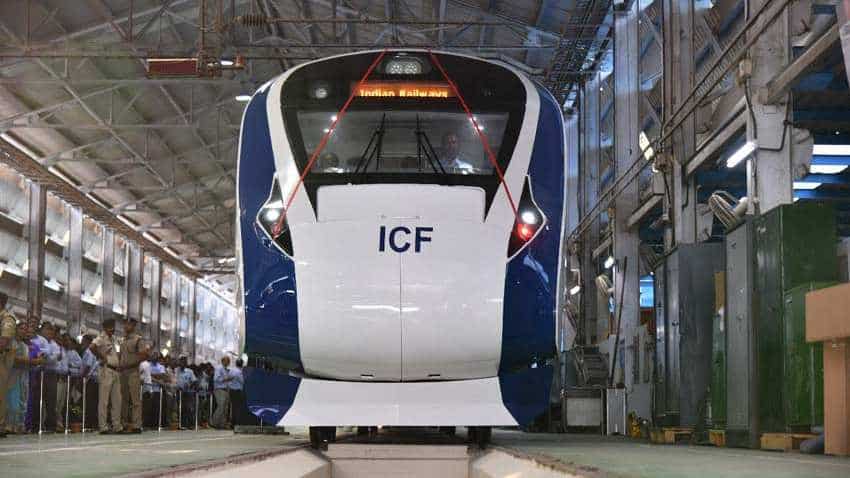 T18 will have just 5-6 stoppages in its route journey.
Written By: ZeeBiz WebTeam
RELATED NEWS

Sources claimed that the Train 18 has successfully completed its trials at the speed of 120 kmph. Train-18 had undergone a trial run In the stretch between Moradabad- Bareily section of Indian Railways. It has reportedly achieved a smooth & successful run at 90-100 kmph and 100-120 kmph speed.

After the medium speed trial, T18 will attempt to run at 160 kmph and post successful trial of 160 kmph, T18 will also undergo the trial run at 160-200 kmph. "High-speed trials will be done between Kota and Sawai Madhopur after the Moradabad trials. These trials will be done a maximum speed of 180 kmph and will certify 160kmph operational capability of the train apart from safety features and reliability at this speed," the Integral Coach Factory had said. It added that the train, though designed for a maximum speed of 160kmph has the potential to go up to 200kmph if matching track, Over Head Equipment and signaling infrastructure is in place.

T18 all set to revolutionise Indian Railways and replace the Shatabdi trains with its High rated safety, security and Passenger amenities features.

T18 is likely to run on Delhi- Bhopal route reason being that this stretch has fewer curves and the train set can achieve 160kmph speed run at many stretches during the journey, said the sources.

However, the Railway Ministry in response has said that Delhi-Varanasi route is already heavily congested and also the train may not able to run in its full potential, said the sources.

Ministry sources informed that a final call on the route is likely to be taken by next week.

Train 18 is all set to have TEJAS train like fare structure. However, the flexi fare mechanism will not be applicable on T18, claimed the sources.

T18 to have fares that will be higher than existing Shatabdi fares on any given route.

The sources said that TEJAS train fare structure is likely to be applicable on upcoming T18 where the fares will be 20-25% higher than Shatabdi fares.

Also, two fare options will be given to passengers - one with the meal and the other without onboard meal.

T18 will have just 5-6 stoppages in its route journey.

With limited stoppages, T18 will be able to achieve its objective of cutting travel time.