Talking about her personal life, she was grown up in Bareilly and Lucknow. Her mother is from Kerala and father from Punjab, therefore the whole India resides in her heart. 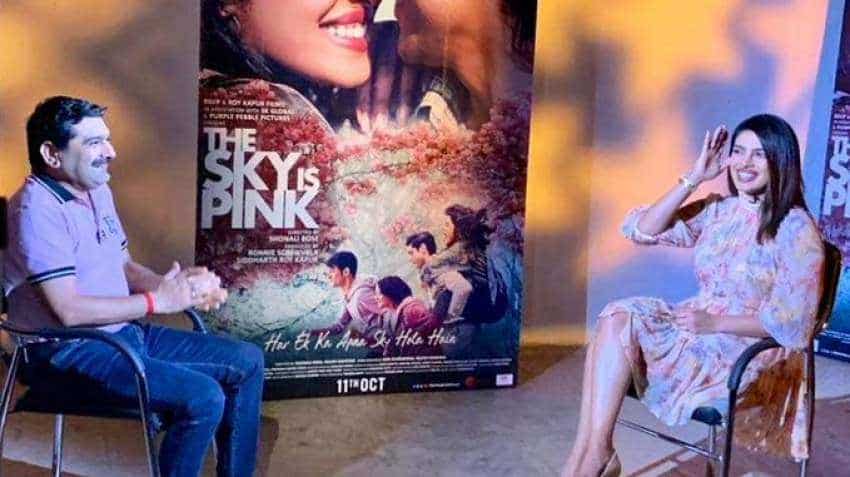 Talking about fighting stress, Priyanka said that stress is as big as you make it. Image source: Twitter/Zee Business
Written By: ZeeBiz WebTeam
Edited By: Prashant Singh
RELATED NEWS

Renowned Bollywood actress Priyanka Chopra has carved a niche with her acting skills not only in India but also on the world stage. Her identity has different shades of a successful woman, but her journey has not been smooth, as she covered this long journey through her courage and resolve. Prior to upcoming Bollywood release, 'The Sky Is Pink', she expressed her views on her two-decade long film career and her personal life in an exclusive chat with Zee Business Managing Editor and Market guru Anil Singhvi.

Priyanka Chopra has been away from Bollywood for many years, but she is making a comeback with her latest film 'The Sky Is Pink'. Prior to the release of the film, she said that she has been associated with the business world for many years, and has invested in many start ups, besides starting a production house.

Talking about her career, Priyanka told Anil Singhvi that there is no alternative to labour, adding "If I want sky, I have to work". The story of 'The Sky Is Pink' is a real life story, relating the story of Aditi and Viren from Delhi. "I want to give my best in every film, but good work depends on good director," Priyanka added.

'The Sky is Pink' is directed by Sonali Bose, while the film has been written by Sonali and Nilesh. The story relates the saga of life between 16 to 55 years. "This film was very difficult for me," Priyanka said. "It was difficult to live with two separate emotions at one time," she added.

Talking about fighting stress, Priyanka said that stress is as big as you make it. "Earlier, I used to take a lot of stress, but after marriage I learnt to handle it. My husband is very quiet. He hardly gets 'angry' while I'm just opposite," she said, adding "Stress hurts you on every front."

Talking about her personal life, she was grown up in Bareilly and Lucknow. Her mother is from Kerala and father from Punjab, therefore the whole India resides in her heart.

As a global star, she finds a difference between Hollywood and Bollywood. In Hollywood, everybody is very particular about punctuality.