In today’s edition of 'News Par Views', Zee Business Managing Editor Anil Singhvi spoke to Narayan Prasad, Chairman and Managing Director (CMD) of Mazagon Dock. This Miniratna company needs no introduction and has recently been listed on the stock markets 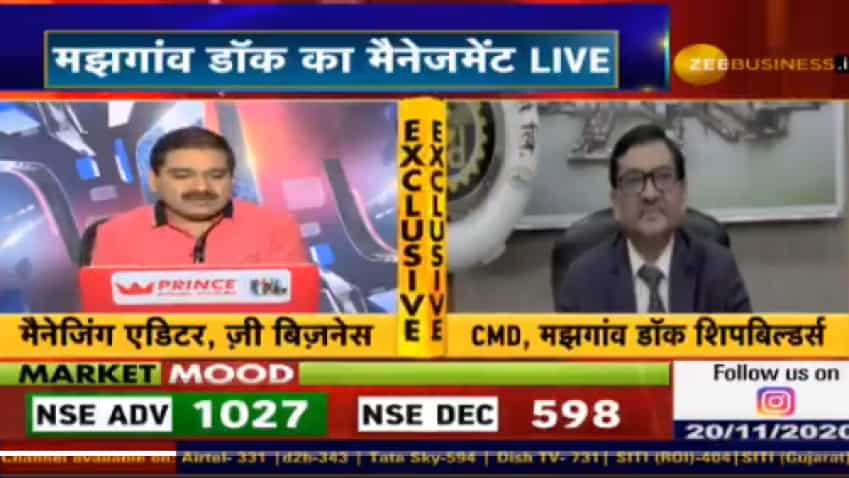 In today’s edition of 'News Par Views', Zee Business Managing Editor Anil Singhvi spoke to Narayan Prasad, Chairman and Managing Director (CMD) of Mazagon Dock. This Miniratna company needs no introduction and has recently been listed on the stock markets. At the time of the IPO, the Market Guru strongly recommended this share for investment. CMD Prasad now speaks about the company's plans. The company makes ships and submarines for Indian Navy and Coastguard.

Prasad said that the Mazagon Dock orderbook currently, stood at Rs 53,500 cr with likelihood of huge orders, going forward. In the next four-year horizon, orders related to new generation missile vessels, new generation OPVs, high speed landing craft and one polar research craft among others are expected, he said.

The big-ticket orders include submarines and destroyers, Prasad further said.

The existing policy of the government is not on the basis of nomination but on the basis of competitive bidding. Mazagon Dock is the only company to have built destroyers so the chances of clinching the contract is much more for the company, he further said.

On the question of profits and revenue visibility, Prasad said that under the existing policy, the profit margins in all the nomination cases is 7.5 per cent.

The existing projects which include Project 75, Project 15 Bravo and Project 17 Alpha have been on the nomination basis. After deductions, the profit visibility is expected at 4.5-5 per cent.

There are talks with the government to raise the margins to 8 per cent.

On top of this, the cost can be saved through the cutting-edge technology, subject expertise and efficient construction, the CMD said.

BMC gears up to prevent another Covid-19 wave; rail, road and air traffic under watch