We are pump priming the economy so that contention increases, which will lead to the creation of a virtual cycle that is driven by high buoyancy for spending in the economy, says Nirmala Sitharaman 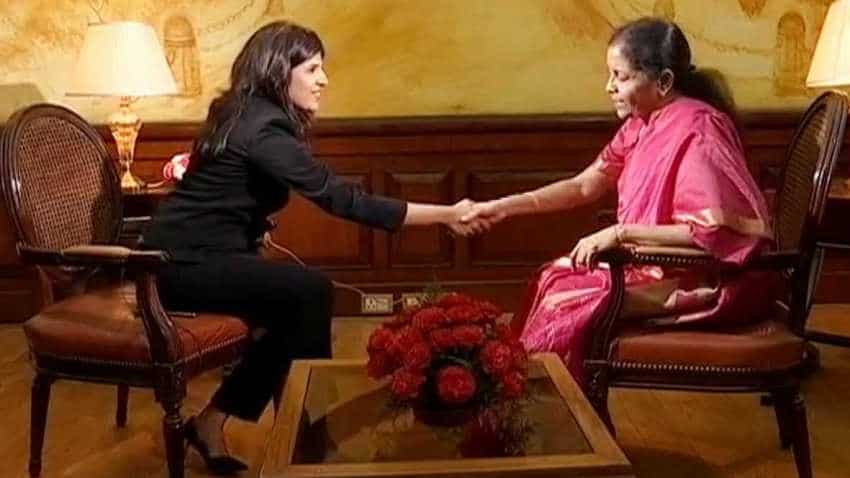 During an exclusive interview with Swati Khandelwal, Zee Business, Smt. Sitharaman says that we have ironed out the wrinkles that prevailed in the banking sector.
Written By: ZeeBiz WebTeam
RELATED NEWS

We are pump priming the economy so that contention increases, which will lead to the creation of a virtuous cycle that is driven by high buoyancy for spending in the economy, says Nirmala Sitharaman, Union Minister of Finance and Corporate Affairs. During an exclusive interview with Swati Khandelwal, Zee Business, FM Sitharaman says that we have ironed out the wrinkles that prevailed in the banking sector and I expect greater openings in areas where there is an immense opportunity. Excerpts:

A: You are right in the sense that unrealistic expectations shall never be built on and even otherwise the revenue generation has only been at a very decent level of 9% and 7.9% in both the direct and indirect taxes respectively. The disinvestment figures are also being achieved. This time, we have given ourselves Rs25,000 crore more on disinvestment target and today it is at Rs1,05,000. So, I don’t see any concern about revenue collection being a cause for worry at all. The fiscal discipline I explained that I have kept the gliding path faithfully, what was 3.4 last time and I have brought it down to 3.3. Although there is a narrative that is going around saying India like the country needs more money for development, the first strings should be eased out, it can’t be tightened, and all those arguments are well taken. But, as long as I have a ‘Kanoon’ (Law) in the Fiscal Responsibility and Budget Management (FRBM) Act, I will have to abide by that.

Q: A lot of compliance have been given and that I think that directionally it is giving a great message to say that everybody must fall in line when it comes to law. And, that ambit of law will itself make things much better.

A: Right and that is what is being the larger message of this budget. We are setting vision and targets. We are ensuring the enabling environment is built for it and an ecosystem is given the necessary push and the much-used word but may not be relevant for the Indian context, the pump priming of the economy, so that the contention increases, and it leads to a virtuous cycle driven by a high buoyancy and everything else for spending in the economy as a result of which you will have a great buoyancy.

Q: Employment becomes one big piece in this whole thing. Are you hopeful that things will improve from here and the investment cycle will kick on?

A: Yes, because in the way in which investment is being invited, we are also ironed out the wrinkles that prevailed in the banking sector, the twin, but the problems that we had have all been sorted out. I expect from here now greater opening in areas where there is immense opportunities, the sunrise sectors that I have listed in my budget speech. Also, together with it in each sector also looking at what other things will have to be done so that an ecosystem develops like for civil aviation, where I am talking about MRO for aircraft and we are building capacity for it. This will slowly integrate into a larger Make in India picture, particularly with a different skating kind of allocation that has been made.

Q: You have gone ahead and taxed the super-rich and that has been taken into account. But there was also a promise perhaps to people above Rs5 lakh income, people like us, who hope that this time some exceptions will be given. Do you think that the honest taxpayers in that sense should be rewarded at some stage giving us a hope that there will be something?

A: It was the first budget of this government and various other incentives are being given to the middle class, whether you are buying your affordable houses or an electric vehicle, the net benefit reaching you is higher. Through GST the commodity/product prices have all come down and rates have been synchronised in a way that you don’t have to pay too much tax. Double taxation has been avoided. Isn’t that money is in your pocket.

Q: Petrol and diesel prices have gone up with an additional special cess that you applied to it. What does it directionally tell us and can we expect similar kind of cess to go up, if yes, then what is the kind of limit that one has put on it?

A: The point is that when we are encouraging renewable energy, use of electric vehicles. There are times when we also have to see that how much can be sent on fossil fuel and it is not so much punishing but also the government is also investing in public transport, better and efficient public transport. Shall will be looking at the direction of public transport substituting private mobility from the point of view of everyone. So, there is a reason for which it is being done.

Q: But can this go up as we have been told that it could up high up to Rs8?

A: We will have to see how it goes because it is the question of the money going in the creation of better roads. After all, better roads, ports and connectivity are for you and me. It is for rich and poor.

Q: You also spoke about PSU asset monetisation and I think it is a massive program that the government is trying to take, which can garner a lot. How do you envisage the whole problem amid a situation where there is no demand?

A: Obviously, first we will be clearing up everything that has been in principle agreed by the CCA. You are right in saying that we will have to see how the environment is but it because it already has been cleared in principle then we will have to look on how best we can fulfil that clearance obtained from the CCA within this year.

Q: Any bank merger plans for the year?

Suspended engineer arrested in multi-crore scam in UP