Many banks have already communicated to their customers about likely inconvenience. 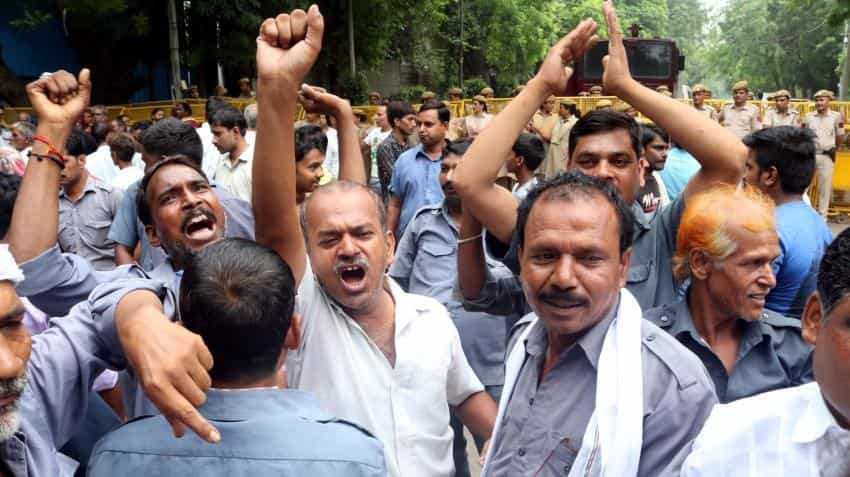 Banking operations are likely to be particularly hit as most of the major unions of PSU bank employees have decided to join the stir. Photo: IANS
Written By: PTI

Essential services like banking and public transport, as also work at public sector entities, may be hit today with ten central trade unions giving a one-day nationwide strike call to protest against the government's "indifference" to their demands for better wages and facilities and the "anti-worker" changes in labour laws.

All major unions, excluding RSS-associated BMS (Bhartiya Mazdoor Sangh), have joined the strike call, terming the government's assurances to look into their demands and the recent announcements for two-year bonus and hike in minimum wage as "completely inadequate".

On its part, the government asked all ministries to ensure that public utilities and essential services are not affected. Secretaries of all departments have been asked to take effective measures for smooth running of various services coming under their respective ministries.

Trade union leaders, however, claimed that the strike would be even bigger than the one last year on September 2 and expected the number of striking workers to swell to as much as 18 crore. Last year, the unions had said that around 14 crore workers participated in the nationwide strike at that time.

The CTUs will strike work protesting against what they call the government's apathy towards their 12-point charter of demands including a monthly minimum wage of Rs 18,000, controlling price rise and assured minimum monthly pension of Rs 3,000.

"This time strike will be bigger than last year as over 18 crore workers from formal and informal sectors would come on streets to protest against government's indifference to their 12-points charter of demands and unilateral anti-worker labour law amendments," Trade Union Coordination Committee (TUCC) General Secretary S P Tiwari told PTI.

He further said, "Besides ports and civil aviation, the essential services like transport, telecom and banking will be paralysed. The workers will go on strike in hospitals and power plants but the protest will not affect their normal functioning."

Speaking to reporters in Mumbai, Labour Minister Bandaru Dattatreya blamed the previous UPA rule for the issues faced by the workers and said the present government "doesn't want a confrontation with labour unions" and rather needs their cooperation and support.

He said banking and insurance sectors are likely to be impacted more due to the strike today, while adding that out of 12 demands of the trade unions, eight are related to the labour department and seven of them have been agreed to.

"The seven demands include wage revision, bonus for workers from Rs 10,000-21,000 and social security, which is a prime aspect for workers, particularly skilled workers like anganwadis, Asha workers and Mid-day meal workers," Dattatreya said.

He said workers in central public sector undertakings like Coal India, GAIL, ONGC, NTPC, OIL, HAL and BHEL will observe strike today. Many of these companies, as also several public sector banks, have said that the strike may impact their operations.

However, Indian Railways and some other central government employees will not participate in the strike as government has already constituted a committee to look into their demand of raising monthly minimum wage from Rs 18,000 to about Rs 26,000 under the 7th Pay Commission.

Tiwari said: "We are not asking for more. We are demanding Rs 18,000 minimum monthly wage which was accepted by the government on the recommendations of 7th Pay Commission."

He was of the view that the demand is reasonable in the backdrop of price rise. Delhi Government has already hiked monthly minimum wage to Rs 14,052, Rs 15,032 and Rs 18,000 for unskilled, semi-skilled and skilled workers respectively.

All India Trade Union Congress (AITUC) said preparations in industrial areas and various sectoral sections of formal and informal economy are all prepared for making this action as "grand protest of working class" against the anti-labour policies of the Centre.

There will be processions in almost all the industrial clusters of Delhi such as Okhla, Kirti Nagar, Mayapuri area, Wazirpur, Jhilmil-Shadra, Patparganj and Mangolpuri from the morning along with industrial strike, it added.

"At Jantar Mantar there will be gathering of workers and employees from Banks, Insurance, Universities, Postal, Telecom, Defence and Oil Sectors to have procession to Parliament," AITUC added.

AITUC Secretary Amarjeet Kaur said, "There will be 'chakka jam' in 11 states like Andhra Pradesh, Telengana Tamil Nadu, Bihar, Chhattisgarh, Madhya Pradesh and Karnataka." The Centre for India Trade Unions (CITU) said Labour Minister had on August 31 informed about the government's commitment to fair earning and social security for workers.

CITU said it considers this a deliberate "misinformation campaign" to create confusion and to "sabotage" the nationwide general strike today. CITU also attacked the BMS on accepting the government's "meager" hike in minimum wages.

BMS has decided not to participate in strike. Last year also on September 2, the union opted out of the strike at the last moment.

"How could a trade union worth its name accept such a mockery on their genuine demand formulated on the basis of a formula accepted by the central govt also? BMS may consider this mockery of offer a "historic achievement" owing to their compulsion, but others cannot," CITU said.

Banking operations are likely to be particularly hit as most of the major unions of PSU bank employees have decided to join the stir.

Many banks have already communicated to their customers about likely inconvenience. Unions like All India Bank Employees' Association (AIBEA), Bank Employees Federation of India (BEFI), All India Bank Officers' Association (AIBOA), and Indian National Bank Officers Congress (INBOC) have served notice, saying they will go on a one-day strike on September 2.

Most banks, including SBI, feel that in case the strike goes ahead, their services are likely to be impacted.

There is continuous attempt by the government to push their reforms agenda aimed at privatisation of banks, consolidation and merger of banks and the like, said AIBEA General Secretary C H Venkatachalam.

"As BMS is not part of central trade union strike, we as an affiliated organisation are not participating," said NOBW Vice-President Ashwani Rana.

Banks have taken necessary steps to ensure smooth functioning and that there is no cash crunch for retail customers, an official of a public sector bank said.