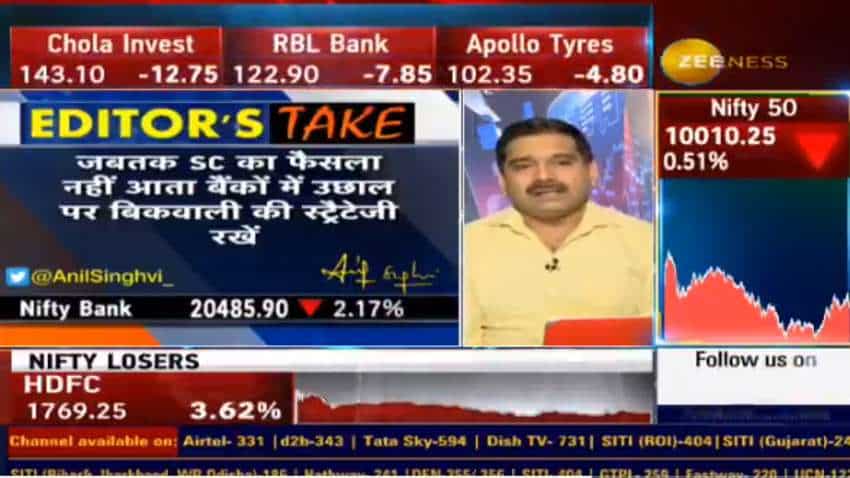 Renowned market guru and Zee Business Managing Editor Anil Singhvi has suggested that investors sell bank and NBFC shares on every rally. Singhvi said that if there was an interest waiver imposed in moratorium on loans then banks will incur losses of nearly Rs 2 lakh crore.

Moreover, Anil Singhvi has clearly explained to investors the sell strategy that should be adopted until the verdict on interest on loan moratoriums comes. The next hearing is scheduled to happen on June 12.

Anil Singhvi's sell recommendation for bank and NBFC shareholders came in the wake of Supreme Court's take on the interest on loan moratoriums in view of covid-19 pandemic spread.

The Supreme Court Thursday sought finance ministry's reply on waiver of interest on loans during the moratorium period after the RBI said it would not be prudent to go for a forced waiver of interest risking financial viability of the banks. The top court said there are two aspects under consideration in this matter no interest payment on loans during the moratorium period and no interest to be charged on interest.

A bench of Justices Ashok Bhushan, Sanjay Kishan Kaul and M R Shah said that these are challenging times and it is a serious issue as on one hand moratorium is granted and on other hand interest is charged on loans.

The bench was hearing a plea, filed by Gajendra Sharma, in which he has sought a direction to declare the portion of RBI's March 27 notification "as ultra vires to the extent it charges interest on the loan amount during the moratorium period, which create hardship to the petitioner being borrower and creates hindrance and obstruction in 'right to life' guaranteed by Article 21 of the Constitution of India".

Sharma, a resident of Agra, has sought a direction to the government and the Reserve Bank of India (RBI) to provide relief in re-payment of loans by not charging interest during the moratorium period.