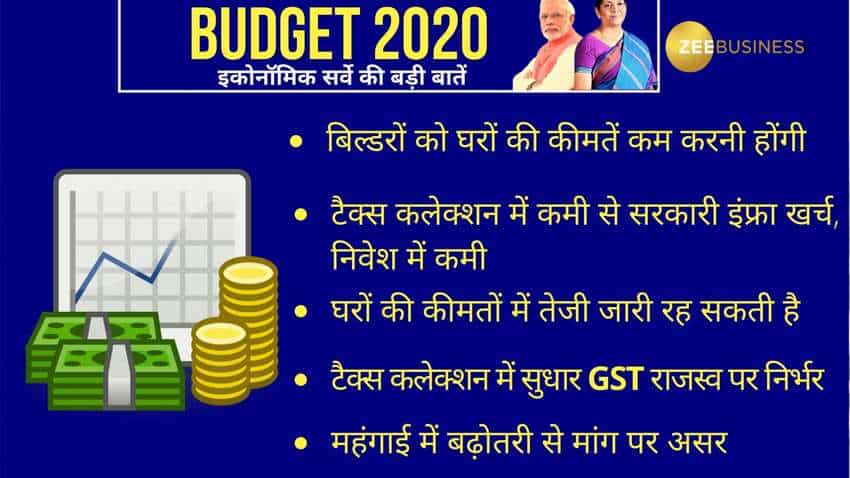 Economic Survey 2020: Finance Minister Nirmala Sitharaman has tabled the Economic Survey 2020 in the Lok Sabha today. The document, presented a day before Union Budget 2020, forecasts India's economic growth at between 6 to 6.5 per cent for the fiscal year starting April. It said that current fiscal year 2019-20's growth rate is at 5 per cent, while adding that the fiscal deficit target for current fiscal may need to be relaxed to revive growth. This year's economic survey has been printed in lavender colour - the same as the colour of the new 100 rupee currency note, the oldest currency note in circulation in the country.

Weak global growth impacting India as well as investment slowdown due to financial sector issues had led to growth dropping to a decade low in current fiscal, it said, adding 5 per cent growth projected for 2019-20 is the lowest it could fall for now. Growth slipped to 4.5 per cent in the July-September quarter. Economic Survey also calls for more reforms for making it Easier to do business in country. The Union Budget will be presented by FM on February 1.

For boosting growth, the survey called for new ideas for manufacturing such as 'assemble in India for the world' which will create jobs. To further make it easier to do business, the Survey called for removing the red tape at ports to promote exports as well as measures for easing the start of business, register property, pay taxes and enforcing contracts.

Reacting to the survey, Daksha Baxi, Head – International Taxation, Cyril Amarchand Mangaldas said, “The President’s account is encouraging. Additionally, some efforts are need to be put into fostering trust and cordial relationship between tax department and businesses. Tax-payer needs to see the benefit of paying taxes. Perhaps some focused attention can be given to this. It will go a long way in reducing the pinch that taxpayer feels on paying taxes.”

“All of this is very encouraging. However, as regards increase in Patents and Trademarks, there are still a lot of issues on the ground which need to be recognised, and the process needs to be simplified as well as expedited.  Detailed accounting standards for intellectual property need to be introduced. There isn’t enough awareness that’s being spread for availing the benefits of patent regime," he said.

The Economic Survey was tabled after president Ram Nath Kovind's speech in which he said that fundamentals of the country's economy are strong and all out efforts are being made to make India a $5 trillion economy. Addressing a joint sitting of the Parliament, the President said that foreign exchange reserves were at a record high and the FDI inflow was on the rise.

"... Government is committed to attaining the goal of making India a USD 5 trillion economy. Towards this objective, government is making efforts at all levels of the economy in consultation with all stakeholders," he said.

You can catch all updates on #BUDGET2020ZEE.