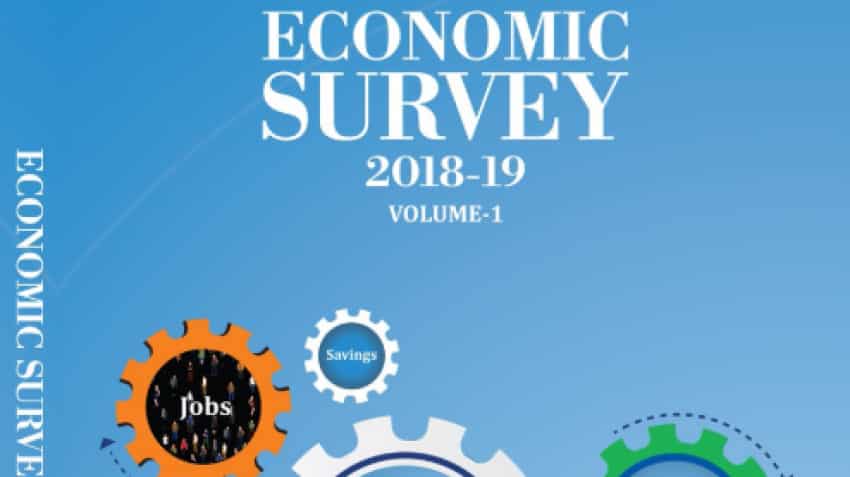 Economic Survey 2018-19: The composition of India’s exports and import basket has by and large remained unchanged in 2018-19 over 2017-18. Image source: Twitter/PIB
Written By: Arun Kumar Chaubey
Edited By: Harish Dugh
RELATED NEWS

According to the Survey, the Rupee traded in the range of 65-68 per USD in 2017-18 but depreciated to 70-74 in 2018-19. The exchange rate in 2018-19 has been more volatile than in the previous year, mainly due to volatility in crude prices, but not much due to net portfolio flows. The Real Effective Exchange Rate also depreciated in 2018-19, making India’s exports potentially more competitive. The income terms of trade, a metric that measures the purchasing power to import, has been on a rising trend, possibly because the growth of crude prices has still not exceeded the growth of India’s export prices.

Other key highlights of the survey are:

3. Petroleum products, precious stones, drug formulations, gold and other precious metals continue to be top export items. India’s import was USD 514.03 billion during the year 2018-19 and crude petroleum, pearl, precious, semi-precious stones and gold remained as top import items. The trade deficit was USD183.96 billion during the period.  India’s main trading partners continue to be the US, China, Hong Kong, the UAE and Saudi Arabia.

4. On India’s External Sector, the survey states that it continues to be stable. Although the Current Account Deficit (CAD) increased to 2.1 per cent of GDP in 2018-19, up from 1.8 per cent in 2017-18, it is within manageable levels. The widening of the CAD has been driven by a deterioration in the trade deficit from 6.0 per cent of GDP in 2017-18 to 6.7 per cent in 2018-19. Rise in crude oil prices in 2018-19 led to the deterioration of trade deficit.
5. Acceleration in the growth of remittances has, however, prevented a larger deterioration of CAD. In funding the CAD, the total liabilities-to-GDP ratio, inclusive of both debt and non-debt components, has declined from 43 per cent in 2015 to about 38 per cent at end of 2018.

6. Further the share of foreign direct investment has risen and that of net portfolio investment fallen in total liabilities, thereby reflecting a transition to more stable sources of funding CAD. In sum, although CAD to GDP ratio has increased in 2018-19, the external indebtedness continues to be on a declining path.

7. India ratified the WTO Agreement on Trade Facilitation (TFA) in April 2016 and subsequently constituted a National Committee on Trade Facilitation (NCTF) which has played an important role in reducing the high cost of imports and exports so as to integrate our cross-border trade with the global value chain.

8. These efforts have resulted in substantive improvement of India’s performance in ‘Trading Across Borders’ indicator as well as in ‘Ease of Doing Business’ ranking. The logistics industry of India has also seen significant development which has led to a jump in India’s global ranking in the World Bank's 2016 Logistics Performance Index.

9. A draft National Logistics policy has been announced by Government of India, for which a national logistics action plan is being developed. The key objective is to drive economic growth and trade competitiveness of the country through a truly integrated, seamless, efficient, reliable and cost effective network through various logistics schemes.