Reportedly, this year's theme of the Economic Survey, could be 'Universal Basic Income'. 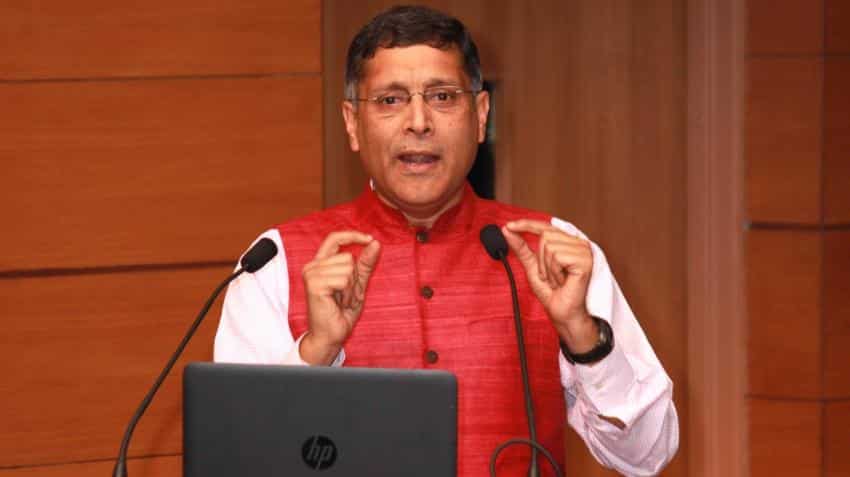 The Survey will be tabled at 1 pm. Photo: IANS
Written By: Hitisha Jain
RELATED NEWS

Ministry of Finance is set to present Economic Survey for 2016-17 today in the Parliament session ahead of Union Budget FY18. The survey analyses the trends in money supply, exports, imports, industrial output, and other macro-economic factors. The Survey will be tabled at 1 pm.

It is presented by Chief Economic Adviser (CEA) Arvind Subramanian. Reportedly, this year's theme of the Economic Survey, could be 'Universal Basic Income'.

Before the presentation of the new Economic Survey, here is a look at the last year's survey and its highlights:

Growth: In the last Economic Survey, the Ministry had said that the country's gross Domestic Product (GDP) for the fiscal will be between 7-7.5%. But, looking at the past three months, this seems unlikely.

On November 8, 2016, Prime Minister Narendra Modi, in a surprise move announced the ban on Rs 500 and Rs 1000 notes which pulled off nearly 86% of currency from the country. The announcement led to the severe cash crunch and economy bleeding.

Soon, the economist and analysts who were looking at the GDP around 7.6%, revised their forecast to below 7%. Recently, in the last month, International Monetary Fund (IMF) had cut India's growth forecast for the current financial year by 1% and dropped it by 0.4% for the next fiscal year primarily due to the demonetisation move taken by the government.

This brought India's growth forecast in FY17 down to 6.6%, against the earlier estimate of 7.6%. In Economic Survey 2016-17, GDP forecast be the utmost crucial.

As per a Business Standard report, today's Survey is likely to have an entire chapter on the demonetisation and its long-term and short-term impact on the economy.

Goods and Service Tax: In the last Economic survey, it had termed the then proposed GST as a "perhaps unprecedented in the modern global tax history." As per the Survey, it had estimated that the new reform will affect nearly 2.5 million excise and service tax payers as it will bring in dramatic changes in the country's tax system.

In early August, GST Bill was passed in both houses of parliament.  GST, which will subsume central and state levies like excise duty, service tax and VAT, is  scheduled to be rolled out from July 1.

According to a PTI report, Finance Minister Arun Jaitley may hike service tax rate to 16-18% from the current 15% in the Budget, due on Wednesday, as a precursor to the Goods and Services Tax (GST) rollout.

The move, that will make flying, eating out, phone bills and a host of other services expensive, would be an attempt to take the rates closer to the proposed tax slabs for GST. The tax slabs decided for the GST are 5, 12, 18 and 28 % and taking service tax closer to one of the slabs is a logical move in the Budget.

However, it will be interesting to see what today's Economic Survey has in store for GST.

Start ups in India: As per the last year's official survey had said the startup sector in the country is witnessing "unusual dynamism", focused on e-commerce and financial services. It had said that India "home to around 19,400 technology-enabled startups", but exit valuation for the investors looking to cash in on the initial funding still remains low.

Start up India was one of the biggest buzzwords of 2016. According to a Tracxn report, nearly 212 startups shutdown in 2016, which is 50% more than the number of startups closed down in
2015.

Tracxn in a report said that the funding for startups dropped by 50% this year to $3.8 billion as compared to $7.6 billion last year. The reason could be 'cautioned investors'.  The report mentioned that more than  9,462 startups were founded last year, compared to 3,029 in 2016. Again, the drop was on the back of non-availability of funds.

7th Pay Commission vs Inflation: As per the last year's survey, the hike in wages under the Seventh Pay Commission is unlikely to destabilise prices and will have little impact on  inflation.

"For most of the current fiscal year, inflation has remained quiescent, hovering within the RBI's target range of 4-6%. But looming on the horizon is the increase in wages and benefits recommended for government workers by the Seventh Pay Commission (7th PC). If the government accepts this recommendation, would it destabilise prices and inflation  expectations? Most likely, it will not," the survey, tabled in Parliament had said.

In August last year, India adopted a monetary policy framework to focus on macroeconomic stability to boost growth. The framework laid down an inflation target of 4% for the next five years, plus or minus 2%.

RBI, in a statement had said, "The decision of the MPC is consistent with an accommodative stance of monetary policy in consonance with the objective of achieving consumer price index (CPI) inflation at 5% by Q4 of 2016-17 and the medium-term target of 4% within a band of +/- 2%, while supporting growth."

RBI had also said that assuming that the revised allowances are implemented from early 2017 and the increase proposed by the 7th CPC is retained, headline CPI inflation in 2017-18 could be 100-150 bps above the baseline.

The impact on inflation is expected to persist for 6-8 quarters, with the peak effect occurring at around 3-4 quarters following the implementation, RBI had said. However, in today's survey, it will give more picture of impact of 7th Pay Commission on Inflation.

Forecasting a strong economic outlook for the country, the survey said the Current Account Deficit (CAD) was limited to 1.4% of the GDP from April to September 2015 while foreign exchange reserves stood at 351.4 billion dollars as of February 5, 2016.

"During the current financial year (April-January), the growth in India's exports declined year-on-year by 17.6% and stood at 217.7 billion dollars. The imports also declined by 15.5%during the period to 324.5 billion dollars," the survey had said.

Last week, a CARE Ratings report had said that the country's trade deficit which improved by 25% in the first nine months of financial year 2016-17 as compared to last year, is likely to be in the range of $100-110 billion by March-end.

During April-December period of the fiscal 2016-17 the trade deficit was at $76.37 billion as against $100.08 billion in the same period last year. Exports were marginally in the positive territory in the first nine months of the fiscal 2016-17 while imports continue to decline by around 7%.

Today's survey is expected to reveal new numbers and data on India's trade.