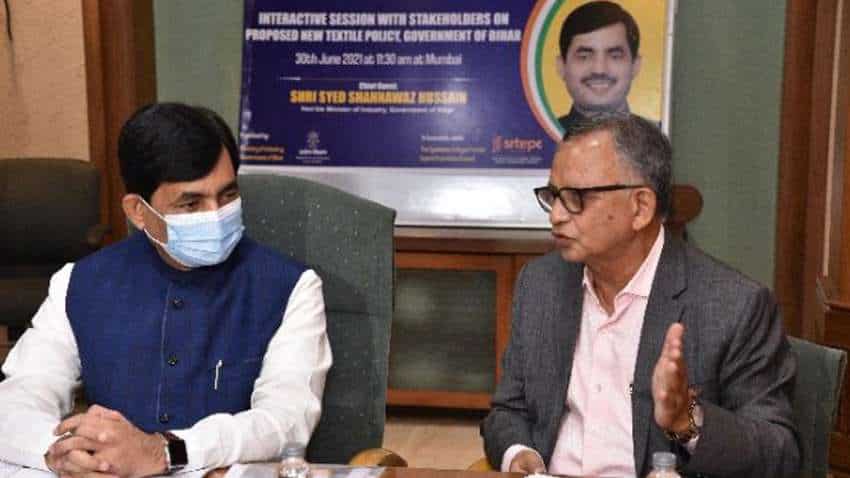 The meeting was attended by the Executive Council of SRTEPC, notable amongst them were Dhiraj Raichand Shah, Chairman, SRTEPC, Bhadresh Dodhia, Sanjiv Sharan, Rakesh Mehra, Rakesh Saraogi amongst others. From the government side, the Additional Chief Secretary Industries, Brijesh Mehrotra and the Investment Commissioner, R S Srivastav attended the meeting. An introduction on Bihar was given by Brijesh Mehrotra.

This was followed by  a presentation on the investment climate in Bihar by R S Srivastav highlighting the business friendly approach of the new government in Bihar.  The presentation highlighted presence of a skilled workforce, easy availability of industrial land and 24x7 power to industry and abundance of potable water in Bihar. This was followed by a detailed presentation on the draft textile policy of Bihar highlighting the incentives that the state is offering, and the floor was opened for discussions.

The Minister Syed Shahnawaz Hussain emphasised the strategic location of Bihar in eastern India for both domestic and export markets. He also explained that most districts, today, were easily connected via nearby airports in Bihar and/or adjoining states.  The Minister also emphasized on the stable and good governance in the state.

He pointed to the data of National Crime Records Bureau to  drive home the point of far lower crime rate in Bihar as compared to leading industrial states. He explained that the state has implemented the system of online filing of Common Application Form (CAF) to make the single window system really effective.

The Minister spoke about recent large investment intentions that the state has received such as that of JSW, Essar and Micromax. He explained that Bihar was growing the fastest in the country and was the only large state to maintain a double digit growth rate despite the pandemic. He informed that since November, 2020, the state has given over 300 SIPB Stage I approvals involving Rs. 19,958 crore investments despite Covid 19 pandemic.

He said that over 53% of the population in Bihar is younger than 25 years and hence Bihar was the most suitable for labor intensive industry. He also said that a majority of workers who have returned to Corona were from the textile sector and are wanting a more decentralised industrial set up which can enable them to ‘work from home’. He further extolled the entrepreneurs to come and invest in Bihar availing of various benefits including demographic dividend and together take the country ahead of Bangladesh in garmenting.

The industry showed promising response to the draft policy applauding the progressive approach of the Government and said that further suggestions if any shall be forwarded to the government. The meeting ended with a vote of thanks by Bhadresh Dodhia, Dy. Chairman of SRTEPC.