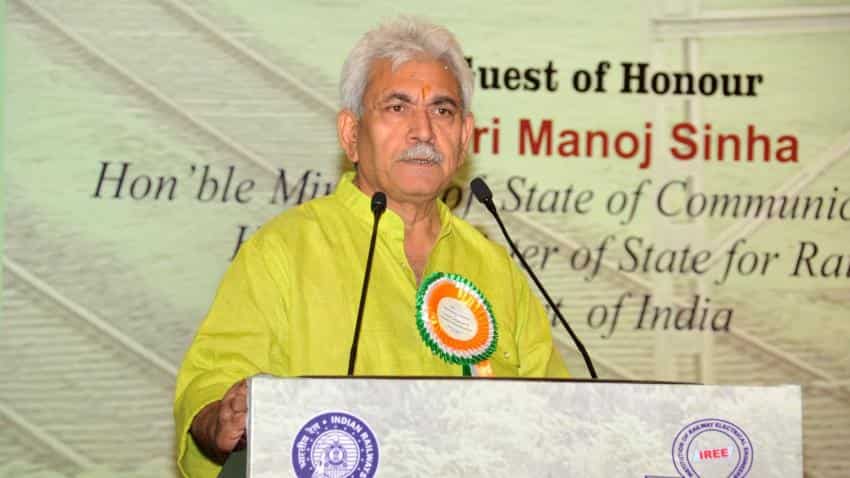 Sinha said the country has to do away with plastic cards with cryptic passwords. Image source: IANS
RELATED NEWS

Union Minister of State for Communication Manoj Sinha today emphasised that the core of Digital India was to create Internet access to every citizen and BharatNet intends to connect all six lakh villages.

Speaking at a symposium on Financial Inclusion - Global Initiative, the minister said the Digital India push was meant to serve the poor and protect their interests.

"Internet connection to every village is the key and  Internet accessibility at 35 per cent or 460 million users as?of now is on the lower side," he said.

"BharatNet project is ambitious as it connects over 250,000 gram panchayats and six lakh villages?through high speed fibre connectivity," he added.

Sinha said the digital economy push by the Modi government had seen all-round increase and disbursal of benefits to the poor through digital means to their bank? accounts.

"Since January 1, 2017, more than 26.7 billion digital? transactions have been completed in India. Since November 1," "1.15 billion transactions have already gone through. These number are significant considering that there are only 460 million internet users in the country amounting to 35 per cent of internet penetration," said the minister.

Seeking to allay the misconception about Digital India, Sinha said it did not mean providing debit and credit cards and payment gateways for all, but to unveil products to the poor with negligible transaction costs.

He said the country has to do away with plastic cards with cryptic passwords.

The Minister claimed the financial inclusion will?be a revolution bigger than the industrial revolution.

He said the industrial revolution vested powers in the hands of a few capitalists whereas the Digital Financial Inclusion will provide power to the masses.

Sinha said telecom remains the backbone and nerve centre of this programme as more users were coming online and doing their transactions on mobile phones.