Did demonetisation hurt job creation? The answer may surprise you

Third quarter of a financial year is between October 1 to December 31. PM Modi had announced demonetisation on November 8, 2016 which falls in the third quarter. 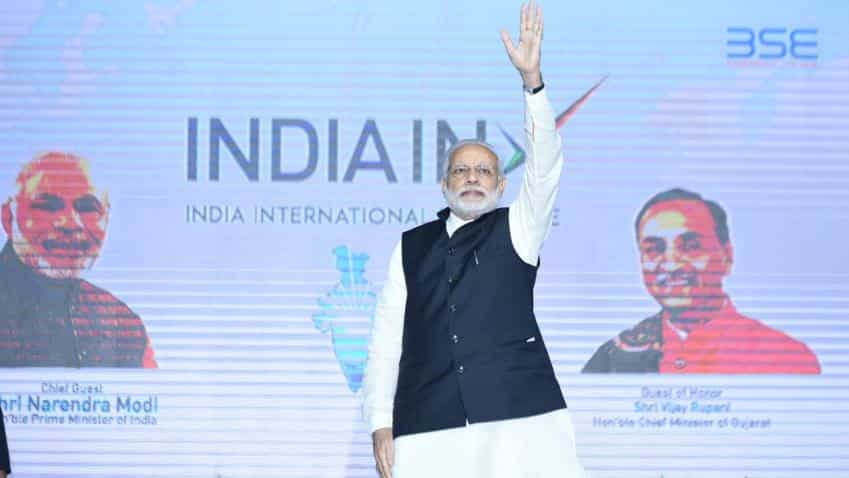 Prime Minister Narendra Modi's 'masterstroke' to tackle black money and push India towards a more 'less cash' society has met with criticism and adulations alike. Most experts pointed at a short-term pain but a positive move for Indian economy in the long term.

Long term is usually defined as a period between 5 to 10 years while short term is less than one year and the rest falling under medium term timeframe.

One of the key arguments against demonetisation was its impact on the Indian economy which in turn derailed job creation.

"Although the pace of job creation remains weak, it is pertinent to note that (in contrast to our fear) demonetization did not dent employment generation in the economy. In fact, employment addition in 3Q was more than that in 1HFY17," Motilal Oswal's Ecoscope report dated April 27 said.

Third quarter of a financial year is between October 1 to December 31. PM Modi had announced demonetisation on November 8, 2016 which falls in the third quarter. 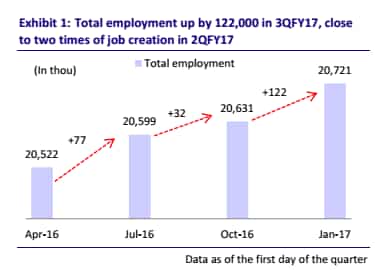 According to Nikhil Gupta and Madhurima Chowdhury of Motilal Oswal, India created 1,22,000 jobs in the third quarter.

They said that 81% of the total Indians employed work in sectors like manufacturing, construction, trade, transportation, hospitality, IT/BPO, education and health. These eight sectors saw job growth of 1.22 lakh in the third quarter as against only 32,000 in the same quarter of the year previous to last.

Although, they said, "Considering average real GDP growth of 7.2% during this period, employment elasticity seems to have worsened significantly."

A sector-wise break up of job creation data as provided by India's labour ministry show that manufacturing created most jobs. 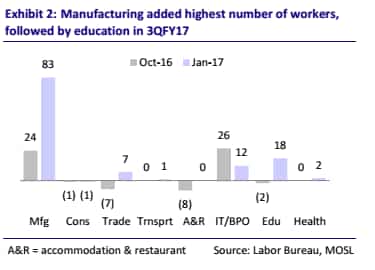 Gupta and Chowdhury warned, "With employment growth so weak in the organized sector (which primarily thrives on productivity improvement), it is concerning whether the segment will be able to absorb the displaced workforce from the unorganised segment. Considering that India is expected to provide 27% of total working age population (15-59 year-old workers) to the world over next 15 years, the worry increases exponentially."