This year, the company plans to place hoardings at 70+ locations in Gurugram and distribute over one lakh leaflets along with 10,000 posters which contain information on dengue prevention. 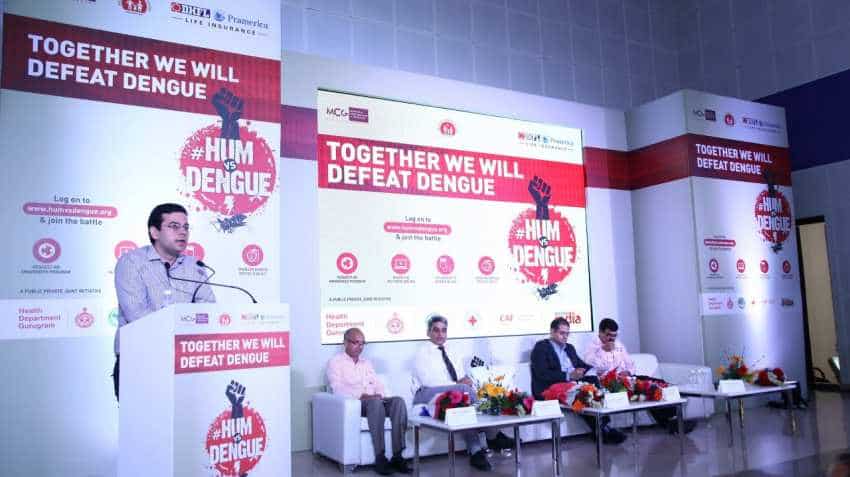 DHFL Pramerica Life Insurance in collaboration with the Health Department of Gurugram have come together to launch the #HumVsDengue campaign to control the menace of dengue. The main objective of the campaign is to spread awareness against the menace of dengue and other vector-borne diseases. Under this initiative, numerous dengue awareness workshops will be conducted in various government schools, corporates and residential societies.

In the fourth year of this collaboration, the event saw dignitaries from Deputy Commissioner’s Office along with Municipal Corporation (MCG) and The Health Department of Gurugram. At the campaign, Rao Narbir Singh, Cabinet Minister, Public Works Department, Haryana government said, “There is a dire need to collectively fight and control Vector Borne Diseases like Dengue and Malaria. Government is determined to control these. More and more awareness programs like #HumVsDengue shall be undertaken to benefit the society.”

Commenting on the association, Anoop Pabby, MD & CEO, DHFL Pramerica Life Insurance Co. Ltd. said, “This is our 4th year of Hum Vs Dengue campaign. Every year we have worked towards reducing reported cases of dengue even further. We, along with all government departments of Gurugram urge the citizens and corporates to step forward and be a part of this community campaign to achieve the vision of a dengue free India. We strongly believe that Dengue can only be fought collectively. Like every time, we will distribute leaflets at homes and schools; and conduct awareness workshops. This year our team plans to reach out to even more schools, societies and corporates.”

HumVsDengue is a public-private initiative to tackle the menace of Dengue, where efforts of the government are supplemented by residents, corporations, hospitals and schools. The campaign will spread dengue awareness through the website ([http://www.humvsdengue.org) ]www.humvsdengue.org) helpline number - (0124-2222465) and the anti-Mosquito Fogging Helpline - (1800-180-1817).

This year, the company plans to place hoardings at 70+ locations in Gurugram and distribute over one lakh leaflets along with 10,000 posters which contain information on dengue prevention.

Amit Khatri, Deputy Commissioner Gurugram & Commissioner MCG said “We appreciate campaigns like #HumVsDengue and welcome these initiatives as they support our efforts of sensitising citizens of Gurugram against Vector Borne Diseases.”

Brahm Deep, Chief Medical Officer, MCG, Gurugram said “#HumVsDengue campaign is a great way of creating awareness about Dengue. It is an ideal example of successful public-private partnership which makes people aware and prompts them to change their behaviour to co-create a healthy society. MCG urges people to extend their cooperation to fight against the eradication of this deadly disease.”