He said the increased connectivity will attract industry, give a boost to employment and as a result will generate more employment. 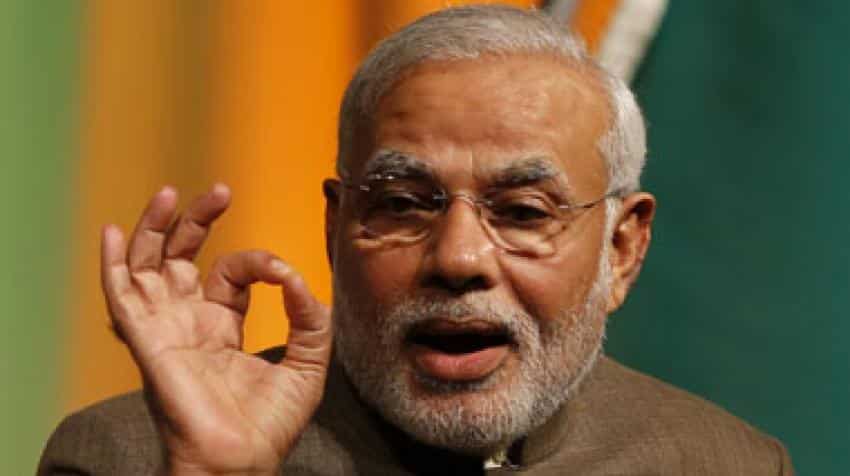 He also spoke of the benefits that the other development projects launched would bring about. Image source: Reuters
Written By: IANS
RELATED NEWS

Development is the only and best answer to every form of violence, Prime Minister Narendra Modi said here on Thursday as he inaugurated projects for Chhattisgarh worth Rs 22,000 crore.

"The mention of Bastar used to invoke images of guns, bombs and violence. Today, this region is known for Jagdalpur airport. I believe that to every form of violence there is only one reply and it is development," he said in his address to a gathering after flagging off the first flight between Jagdalpur and Chhattisgarh capital Raipur.

In the region where the previous governments did not dare to build even roads, the Bharatiya Janata Party (BJP) governments of the Centre and the state have built an airport.

"Now, the travel time between Raipur and Jagdalpur will be shortened to just 40 minutes from the earlier 6-7 hours. Thanks to the policies of our government, today more people are flying than those travelling in trains` AC coaches," Modi said.

He said the increased connectivity will attract industry, give a boost to employment and as a result will generate more employment.

Earlier, Modi also dedicated the modernised and expanded Bhilai Steel Plant to the nation and distributed laptops and cheques to beneficiaries.

He said peace, stability and law and order were the prerequisite for development and the BJP government in Chhattisgarh led by Chief Minister Raman Singh had provided that and embarked the state on the path of progress.

"Raman Singh, with his hard work, has taken further the vision of (former Prime Minister) Atalji (Bihari Vajpayee), which gives us pleasure. The state is moving ahead with pace on the paths pf development," he said.

The Prime Minister said his government altered the laws to make sure a certain part of the income from the minerals extracted from Chhattisgarh is spent on the welfare of the people including the Adivasis.

Targetting the political rivals, Modi, who is on a day-long visit to the state, said the previous Congress-led UPA government did not approve the project of an Indian Institute of Technology (IIT) in Bhilai as mooted by the Raman Singh government, but "today, we have laid the foundation stone of an IIT campus in Bhilai".

Also inaugurating the Integrated Command and Control Centre at Naya Raipur Smart City, he also unveiled a plaque to mark the commencement of phase-2 of BharatNet.A

He later visited Blast Furnace-8 at the Bhilai Steel Plant, and was briefed on various aspects of the Plant. People lined the streets of Bhilai to greet the Prime Minister.

The second Prime Minister to visit the Bhilai Steel Plant after Pandit Jawaharlal Nehru, who last visited it in 1963, Modi said that the Plant has contributed in a big way to nation-building. He said the modernized and expanded plant would be instrumental in building a strong foundation for New India.

He also spoke of the benefits that the other development projects launched would bring about.

The Prime Minister said that in the last two months, the Gram Swaraj Abhiyan has had a very positive effect.

"This Abhiyan (mission) is being pursued vigorously in the 115 Aspirational Districts, out of which 12 districts are in Chhattisgarh," he said mentioning about the benefit that schemes such as Jan Dhan Yojana, Mudra Yojana, Ujjwala Yojana, Fasal Bima Yojana and Saubhagya have brought about in the State.

Modi said that keeping in mind the interests of the tribal population, the Forest Rights Act is being strictly implemented. He said the government is working for the welfare of tribals and Eklavya Vidyalayas are being established across the country.

Raman Singh on the occasion slammed the Congress-led UPA government for delaying proposal of establishment of IIT at Bhilai.

"During UPA, I requested for IIT Bhilai many a time but was not approved. When Modiji became Prime Minister, I met him and he immediately agreed for it. Ho told me to go and announce it`s establishment," Singh said amid chants of Modi-Modi.