Dena Bank will be out of the PCA list by March 2019: Karnam Shekhar

Karnam Sekar, MD and CEO, Dena Bank during an interview with Swati Khandelwal, Zee Business, said, methods like resolution at NCLT, the sale of assets through ARC and settlement of certain accounts at the bilateral level has helped in bringing down the NPA levels of the bank”. 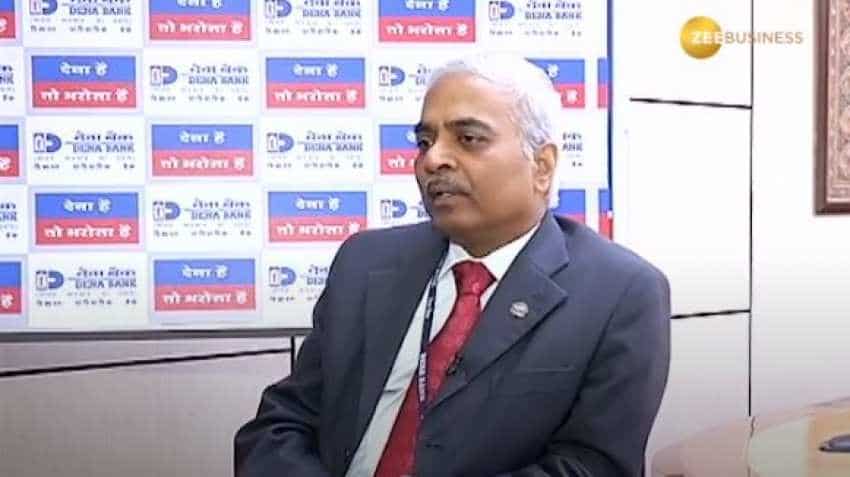 We haven’t worked on the consolidated banks capital requirement or sent any separate recommendation to the government of India. Image source: Zee business

Karnam Sekar, MD and CEO, Dena Bank during an interview with Swati Khandelwal, Zee Business, said, methods like resolution at NCLT, the sale of assets through ARC and settlement of certain accounts at the bilateral level has helped in bringing down the NPA levels of the bank”. He also added, “the three banks, Bank of Baroda, Vijaya Bank and Dena Bank will have a single front office from April 1, 2019”. Edited Excerpts:

Q: Update us on the success of ‘Mission Dena 9999’ that was launched to reduce the total NPA level of the bank. Also, speak about other steps that are being taken to reduce the NPAs?
A:  We had two quarters, quarter ended in December 2018 and quarter ended March in 2019, after the amalgamation of the three banks, ‘Vijaya Bank, Dena Bank and Bank of Baroda’, was announced to do something at the banks level and ‘Mission Dena 9999’ is a result of the same. The programme was launched with an aim to reduce the NPAs of the bank, which stood at Rs16,140 crore by end of September 2018 to at least Rs9,999 by March 2019. Launched in the first week of October 2018, the mission has gained a pleasant success by quarter ended in December 2018 as we were able to reduce the NPAs by around 3,000+ crores from Rs6,000 crores, which we were supposed to reduce in two quarters.

We have adopted three-four different methods for the purpose and they include perfect control on the slippages of NPAs, good cash recoveries, settlement of one or two cases at the NCLT and good sales of few big accounts wherever we were able to get good deals with ARC while few accounts were settled at the bilateral level. These four-five efforts have helped us in reducing our gross NPAs by more than Rs3000 crores in terms of variables. The gross NPA percentage which stood at 23.7 per cent at the end of September 2018 has gone down to 19.7, which is almost 4 per cent reduction in gross NPA. Similarly, Net NPA was brought down to 10.25 per cent from 11.70 per cent and the net loss was brought down from 414 to 178.

This was possible because we had a focus on the recovery in the written accounts and reducing the operating cost. Provision requirement of investments has been brought down. So, all these have contributed to improving profitability. So quality in the process has improved and profitability ratio has also improved and we want to continue the same trend in the quarter ending in March 2019. So, we really want to touch the 9999, by which our gross NPA would come down to almost 17 per cent and Net NPA would come down to 6 per cent.

Q: Let us know about the kind of discussions that you are having with the unions and also provide a deadline by which the issues will be resolved to facilitate a smooth amalgamation of the three banks?
A: The discussions with all stakeholders like employees, customers and the management board were started with a right earnest as soon as the amalgamation plan was announced. A lot of discussions are happening with the employees and time and again the government of India, finance minister and the secretary have confirmed that staffs will not have any issues. The staffs are happy with the results of the recent merger of the SBI and its associate banks. So, here also we don’t see any issue. And, all the stakeholders' interest will be taken care of.

When it comes to timeline than April 1, 2019, is the time by which the three banks would operate as a single bank as far as the customer front is concerned. So, the front office is going to be one from April 1, 2019. This is an ongoing process and will continue.

Q: Update us on your plans for sales of the non-core asset?
A: It has been almost nine-months when we identified the non-core assets in both investment area and real-estate area for sale, which are not required for our business so that we can improve on our capital base. So, we had some success in investment and an agency has been appointed to look in the issue of real-estate and they are doing that. We foresee some good results in the quarter.

Q: Tell us about the expected consolidated bank capital that will be required by Dena Bank in form of recapitalisation fund from the government?
A: We haven’t worked on the consolidated banks capital requirement or sent any separate recommendation to the government of India. But, we, Bank of Baroda, Vijaya Bank and Dena Bank, has separately sent their regular routine requirements for the year 2018-19. These requirements were sent in the first quarter itself and the government has said there is no issue when it comes to capital and they will be recurring whatsoever is required. So, the individual banks will be getting the capital that is required by them.