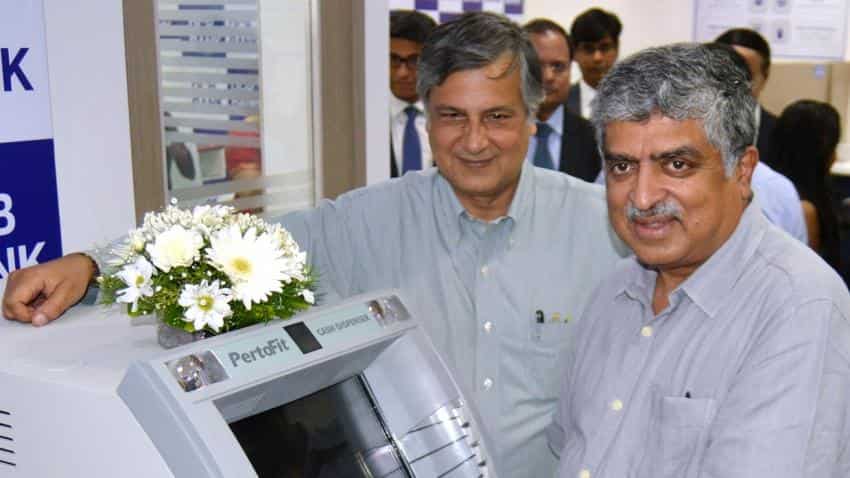 Entrepreneur Nandan Nilekani and DCB Bank Chairman Nasser Munjee at the launch of an Aadhaar based ATM in Bengaluru, on June 13, 2016. Image Source: IANS

Demonetisation would see a massive activation of digitisation of financial services in the country, although there will be some amount of "short-term pain" in the coming weeks, former UIDAI Chairman Nandan Nilekani said on Monday.

The ex-CEO of Infosys said while the infrastructure has been laid down in the last seven years, the demonetisation drive will accelerate the roll out of digital financial services in India supported by Aadhaar, Unified Payment Interface (UPI), USSD and micro ATMs.

"... What would have taken another three to six years to get rolled out, I now believe because of the urgency of the matter, will happen in three to six months," Nilekani told NDTV.

He added that one would see "massive activation" of digitisation in Indian economy.

"There will definitely be some amount of short-term pain in the coming weeks. But you will see this acceleration is going to benefit everybody," he said.

Nilekani cited the example of feature phone owners, who can transact using USSD channel and said this will bring "everybody into the digital system".

"The more important thing is when the economy becomes formal, when everybody's financial transactions are digitised ...India is going to go from data poor to data rich and that will make it more and more difficult for people to do dishonest things or to be outside the system. You will reduce the amount of black money in the system," he said.