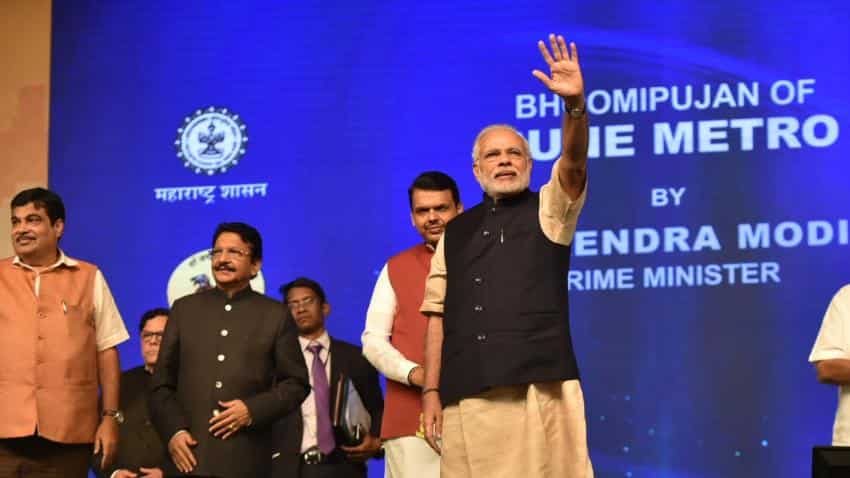 Prime Minister Narendra Modi on Saturday warned of ruin for the dishonest after the expiry of December 30 deadline for depositing scrapped currency and said they should not underestimate the mood of the country against corruption.

"Dishonest people, you should not underestimate the mood of 125 crore people. You will have to be afraid of it... Time has come for ruin of dishonest people. This is a cleanliness campaign," Modi said.

The Prime Minister was addressing a gathering at MMRDA ground in the Bandra Kurla Complex (BKC) in Mumbai after laying foundation of various big ticket infrastructure projects.

"We took a big decision against black money and corruption on November 8 and 125 crore Indians endured pain but did not stop supporting me. I want to assure people of the country that this battle won't end till we win it," he said.

Hitting out at parties opposing demonetisation, he said, "this is not a simple battle. Those who have consumed malai (cream) did not leave any stone unturned to foil this (demonetisation)."

"The corrupt have made all efforts to defeat the decision (demonetisation). They even thought of managing bank officials to get their black money converted into white. And that's how many of them got caught," he said.

"I said there will be pain for 50 days (after demonetisation announcement)," he said, adding people are ready to bear the pain in the country's interest.

"People have borne the troubles in the country's interest and are willing to do so in future too," the PM said.

Modi alleged that those who benefited from corruption during the earlier regimes "in last 70 years" did all they could to ensure the demonetisation move by him does not work.

"Those who are used to a certain type corrupt practices for last 70 years, will have to pay the price of their acts," he said.

"Time has changed and after a gap of 30 years, a government with full mandate is in power. One should not forget it. The country will change, will move forward and will hold its head high before the world," the PM said.

Modi, who earlier laid the foundation of the Chhatrapati Shivaji Maharaj memorial off Mumbai coast, said the Maratha king was a multi-faceted personality "which inspires us".

"I am grateful to the Maharashtra government that I got the chance to perform jalpujan of Chhatrapati Shivaji Maharaj," the PM said.

When the memorial is complete, people will admire the iconic building, he said, adding Shivaji Maharaj "is an inspiration for all of us" and remains a torch bearer of good governance.

"If India is projected in the right manner, it has the potential to attract global tourism," he said.

"After independence, had we adopted the path of development, the problems we face today wouldn't have been there," Modi said.

Development should be sustainable and should help the poor realise their dreams, Modi said.

The PM also dwelt on the various development initiatives of his government.

"Our efforts is to ensure affordable medicine to the poor. When we came to power, there were 18,000 villages without power. We decided to provide electricity to them in 1000 days," Modi said.

However, as Thackeray began to speak, he was greeted with shouts of 'Modi, Modi' from BJP workers in audience.

"I extend my best wishes for memorial construction and hope that it gets completed within stipulated period," he said.

"I have come here to pay obeisance to Chhatrapati Shivaji Maharaj," Thackeray said, adding the memorial should be built as strong as the Sindhudurg fort, built by the Maratha king.

The Sena leader also asked the government to "free forts in Maharashtra from the shackles of the Archaeological Survey of India".

Maharashtra Chief Minister Devendra Fadnavis said the memorial will be the tallest in the world.

"If the US is known for the Statue of Liberty, Maharashtra will be known as the land of Chhatrapati Shivaji Maharaj," the CM said.

Justifying the state government's decision to go ahead with the memorial despite opposition from various quarters, including environmentalists and activists, Fadnavis said, "This memorial is to remind people not to forget our glorious past. This memorial will inspire every person to work for good governance."