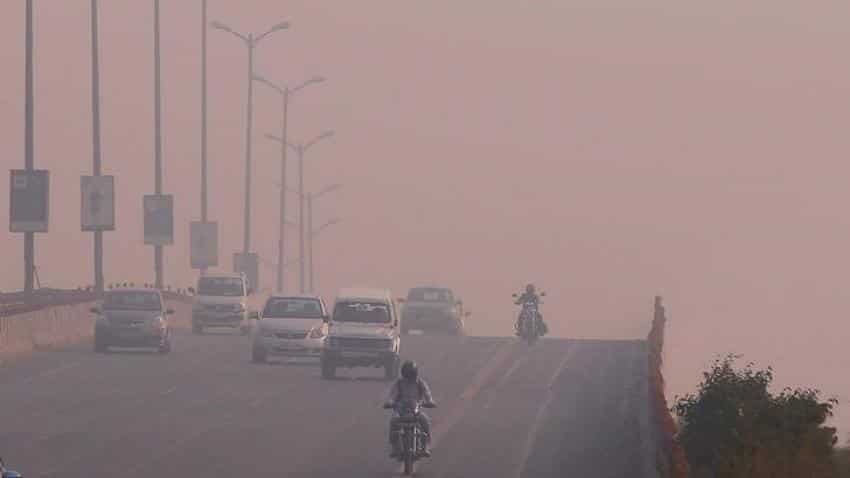 Commuters make their way amidst smog on a flyover in New Delhi. Image Source: Reuters
Written By: Reuters
RELATED NEWS

Authorities in New Delhi began revoking licences for thousands of older diesel vehicles on Tuesday and halted construction work on the underground rail network, as air pollution remained several times over the safety limit despite easing from Monday.

The measures were the latest attempt to lift a thick haze of smoke, ash and other pollutants that has blanketed the capital city of more than 17 million people for more than a week, triggering public anger.

The Supreme Court (SC) was scheduled to hear several public interest petitions from environmental groups seeking its intervention in implementing anti-pollution measures that a top environment tribunal had ordered earlier in the year.

Licences given to diesel-powered vehicles of more than 15 years old are being withdrawn, which would lead to the removal of 200,000 vehicles from the city's roads, Delhi lieutenant governor Najeeb Jung`s office said in a statement.

In July, the National Green Tribunal had ordered Delhi authorities to pull diesel vehicles that were more than 10 years old off the roads, but that order was not enforced.

"There is lax action on the court's directives. There is little recognition of the urgency of toxic air pollution, particularly in the winter months," said Sunita Narain, head of the Centre for Science and Environment which has filed a petition before the court.

"We are asking the court to monitor the implementation of measures," she said, calling for the government to declare the latest outbreak of smog a public health emergency.

Levels of PM 2.5, tiny particulate matter that reaches deep into the lungs and causes breathlessness, throat irritation and wheezing, were above 700 in the city`s worst affected areas on Monday, according to the air quality index as monitored by the US embassy.

On Tuesday, the air quality index had dropped to 372 by around noon, but that was still in the highest alert "hazardous" zone which starts at 300.

"I could smell the pollution from inside the plane when I landed in Delhi," said Kiran Shah, a businessman who flew in from Mumbai on Tuesday.

The Delhi Metro has stopped work in line with the city government's order to halt construction, spokesman Anuj Dayal said. The agency had been trying to catch up on delays with the laying of tracks to newer parts of the sprawling metropolis.

It has suspended excavation and backfilling work which added to the dust levels in the city, Dayal added.