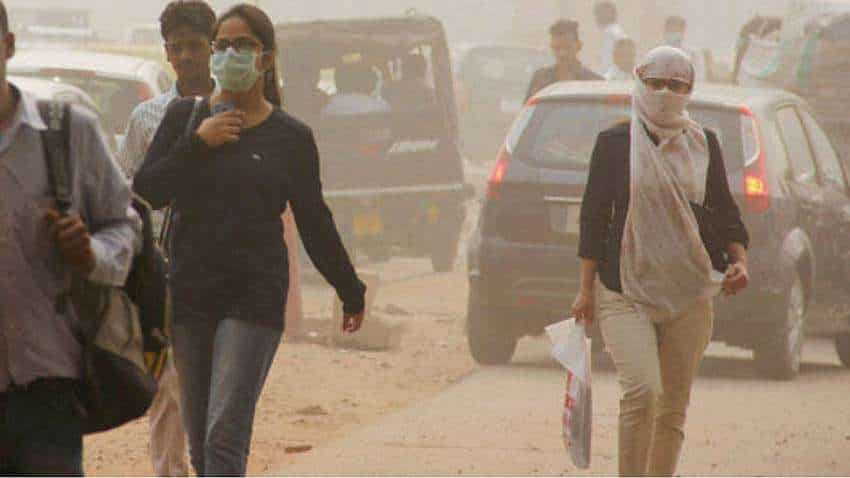 Air pollution in Delhi-NCR: Delhi`s air quality index stood at 344 micrograms per cubic metre at noon, as against 476 a day before.
Edited By: ZeeBiz WebTeam
RELATED NEWS

On Tuesday, the newly-formed Commission on Air Quality Management decided that in view of deteriorating air quality in the NCR region, there is a need to invoke the Graded Response Action Plan (GRAP) and entrusted the task of operationalising and monitoring the CPCB till a mechanism is set up by the Commission.

In view of the spike in pollution and likely increase in activities during festive season, hot mix plants and stone crushers have been directed to remain closed all the time till November 17 and the frequency of mechanised cleaning of roads and water sprinkling has also asked to be increased, particularly on the road stretches with high dust generation potential.

"It shall be ensured that guidelines standard operating procedures for dust mitigation at construction sites are strictly adhered to. In case of violations, strict action should be taken against the violators like imposition of penalty or temporary stoppage of construction activities," the CPCB said.

Besides this, the states of Punjab and Haryana must take immediate stringent actions to curb stubble burning. According to the Ministry of Earth Sciences, stubble burning share in PM2.5 in Delhi`s air was 3 per cent on Wednesday as against to 42 per cent on November 5.

Biomass burning in Delhi and other NCR towns will also be strictly checked, the CPCB said. Implementing agencies have also been asked to ensure compliance of orders of courts and the National Green Tribunal regarding banning of sale and use of firecrackers.

Delhi`s air quality index stood at 344 micrograms per cubic metre at noon, as against 476 a day before. The city recorded severe category air quality for six consecutive days due to an increase in stubble burning and unfavourable wind speed.

The CPCB also said that the action is being taken as it has been observed that PM 2.5 concentration in Delhi NCR exceeded 300 micrograms per cubic metre at 7 p.m. on November 8 and persisted for more than 48 hours at on November 10.

"Currently, the AQI is in very poor category and as per Air Quality Forecast of 11th November 2020 for Delhi City by Indian Institute of Tropical Meteorology, Pune, Ministry of Earth Science, air quality over Delhi NCR is likely to improve and stay in upper end of very poor category during the day and tomorrow. However, air quality may deteriorate marginally and remain in upper end of very poor to severe category on November 13, 2020," it added.