The Janakpuri West-Kalkaji Mandir section of the Magenta line will be the longest stretch to be opened at one go so far by Delhi Metro, DMRC Corporate Communications Executive Director Anuj Dayal told reporters here, adding that 3.9 lakh passengers are expected to take the line. 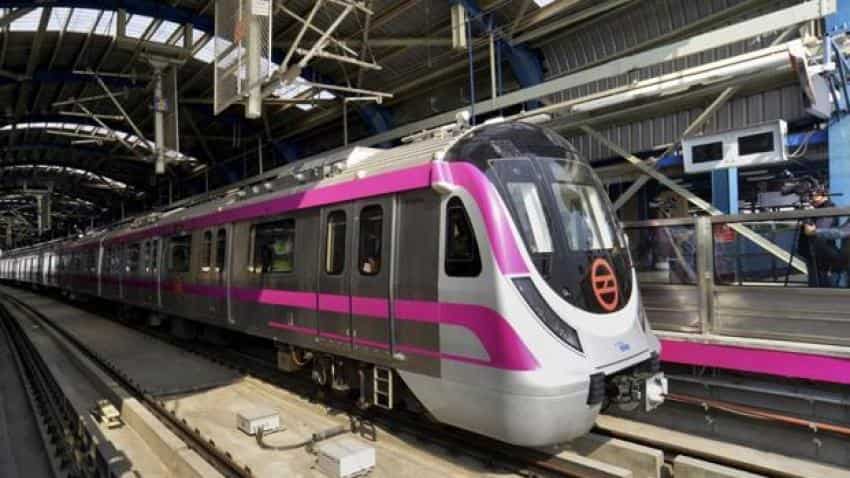 After the Magenta line fully opens, the corridor will operate with 24 trains. Image source: PTI

The soon-to-be-opened Janakpuri West-Kalkaji Mandir section of the Delhi Metro's Magenta line will provide people easy access to the domestic terminal of the Indira Gandhi Airport and will also reduce the commuting time between Noida and Gurgaon to about 50 minutes.

The Janakpuri West-Kalkaji Mandir section of the Magenta line will be the longest stretch to be opened at one go so far by Delhi Metro, DMRC Corporate Communications Executive Director Anuj Dayal told reporters here, adding that 3.9 lakh passengers are expected to take the line.

The corridor will be formally opened by Union Minister for Housing and Urban Affairs Hardeep Singh Puri and Delhi Chief Minister Arvind Kejriwal on May 28 from the Nehru Enclave metro station.

The 24.82-km section comprises 16 stations including interchange facilities at Hauz Khas (with yellow line) and Janakpuri West (with Blue Line) and is part of the Magenta Line from Janakpuri West to Botanical Garden in Noida, he said.

The expanse of entire Delhi Metro network will then increase to 277 km with 202 Metro stations after this section opens, he said.

Out of the 16 stations on the upcoming section, 14 are underground, he added.

Dayal said that 1.85 lakh passengers are expected to interchange at Hauz Khas and that would help reduce the pressure on Rajiv Chowk.

After the Magenta line fully opens, the corridor will operate with 24 trains which will gradually increase to 26 apart from the operating reserves, he said.

The frequency of trains will be five minutes and 15 seconds during peak hours through the whole section and if passenger traffic demands shorter intermediate loops with higher frequency will be introduced after studying the traffic pattern, he said.

The waiting time during non-peak hours will be six minutes.

With opening of this section, the domestic terminals of the Indira Gandhi Airport are also going to get metro connectivity.

The currently operational Airport Express Link provides metro connectivity to the T3 terminal of the airport from where all international carriers and some domestic airlines fly, Dayal said.

However, there is no metro connectivity for the domestic terminals from which the low cost operators fly. The station will help the domestic passengers coming from south, west, east, north and central parts of Delhi, he added.

The Magenta line will reduce the commuting time between Noida and Gurgaon by at least 30 minutes.

The passengers coming from Gurgaon will need to get down at Hauz Khas and take a direct train to Botanical Garden in Noida.

The escalators installed at the new Janakpuri West Metro station have the highest elevation for any escalator in India, he said.

The horizontal length of the escalators are 35.32 metres, which is almost equal to a five storey building.

Hauz Khas metro station will be the deepest underground metro station at 29 metres surpassing Chawri Bazar which is at a depth of 25 metres.

The present station at Hauz Khas is 17 metres deep. For the construction of the new station, it was not possible to go below the existing station, as the foundation is 32 metres and there is the foundation of the flyover on Outer Ring Road also, he said.

"It has been designed as a five level station (rail ? platform ? intermediate ? intermediate - concourse). Generally interchange stations have three or in some cases four levels only," he said.