The Delhi government had earlier threatened to impose the Essential Services Maintenance Act (ESMA) to ensure smooth functioning of the Metro and appealed to the employees not to resort to strike. 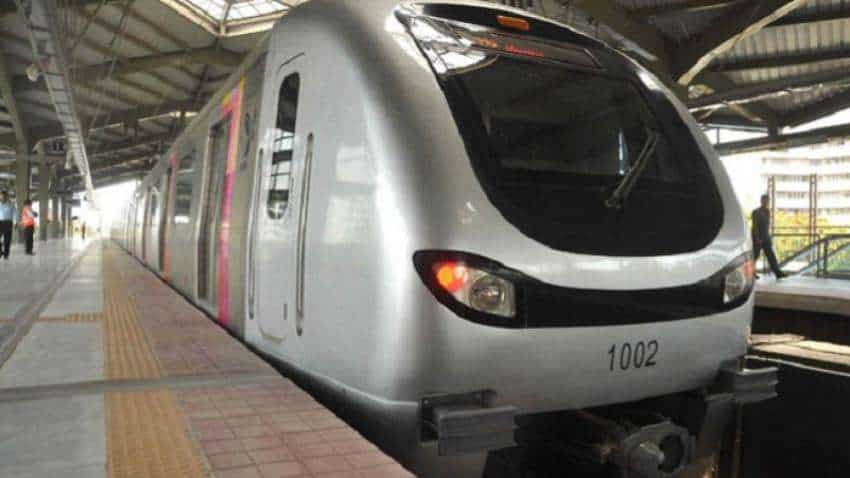 DMRC had to approach the high court in the evening after two rounds of talks with the representatives of DMRC Staff Council failed to break the deadlock over their disputes. Image source: India.com
Written By: PTI
RELATED NEWS

In a relief for Delhiites, the Delhi High Court today restrained DMRC staff from going on strike from midnight over a number of demands, including pay-scale revision, saying their action does not appear justified or legal as around 25 lakh people using Metro services daily will be affected. The Delhi government had earlier threatened to impose the Essential Services Maintenance Act (ESMA) to ensure smooth functioning of the Metro and appealed to the employees not to resort to strike.

The ESMA is imposed by authorities to ensure smooth functioning of the services when faced with a situation of strike. But the DMRC had to approach the high court in the evening after two rounds of talks with the representatives of DMRC Staff Council failed to break the deadlock over their disputes. The petition by the DMRC was mentioned at the residence of Acting Chief Justice Gita Mittal who assigned it for an urgent hearing before Justice Vipin Sanghi.

After the hearing which started around 5:30 pm, Justice Sanghi passed the ex-parte interim order holding that prima facie, the action of the metro staff does not seemed to be justified or legal. The court said that DMRC is running a public utility service which caters to around 25 lakh citizens of Delhi, who come largely from the middle income group, on a daily basis and the fact that they would be greatly inconvenienced if the staff go on strike.

"... Prima facie, the action of the respondents (employees) does not appear to be justified or legal since sufficient notice has not been given to the petitioner and the conciliation proceedings are still in progress, I am inclined to grant ad-interim relief as sought in the application. "Accordingly, the employees are restrained from going on strike on June 30 or till further orders in the matter," the judge, who heard the matter for around 30 minutes, said in a five-page order.

The court issued notice to general secretary (staff council) and DMRC employees union for July 6 on DMRC's plea which sought direction to restrain the employees from resorting to strike as per their notices of June 18 and 20. A member of the staff council said that in view of the court order, the strike has been "deferred". DMRC, represented through advocate Kunal Sharma, challenged three notices given by the employees union and staff council of June 14, 18 and 20 respectively.

DMRC showed correspondence between the corporation and the employees and minutes of meetings held between its representatives and the DMRC staff council which showed that a settlement was arrived at between them on July 23 last year. The court said it appeared that there were disputes regarding implementation of the terms of the settlement and it is the claim of the employees that the terms of the settlement have not be fully implemented till date.

However, the position taken by DMRC appeared that the staff council was raising further demand which according to it was unjustified. The court said that from the notices, it appeared that the employees have threatened that in case the settlement is not implemented, the "staff will not go to home from the night of June 29 and shutdown/ lockout/ tool down will be done with effect from June 30."

DMRC submitted that the issue of implementation of the settlement was pending before the Regional Labour Commissioner and the proceedings are currently in progress. However, the staff threatened to go on strike from tomorrow, he said. It said it was ready and willing to resolve the disputes with the employees to fully implement the settlement arrived at last July.

The total liability of DMRC, which is a joint venture between the central and Delhi governments, till date is Rs 38,685.03 crore. There are nearly 12,000 people employed with the Delhi Metro, with the non-executive staffers accounting for about 9,000.
Some of the non-executive staff of the DMRC have been demonstrating at a few metro stations, including Yamuna Bank and Shahdara, since June 19. The non-executive workforce includes train operators, station controllers, operations and maintenance staff and technicians, and form a major component in the operation of the rapid rail network.

The protest is over a number of issues, including pay-scale revision, modification of the DMRC Staff Council as an employees union, proper guidelines for sacking of an employee and that too in extreme conditions. Chief Minister Arvind Kejriwal had tweeted in the day, "Whereas all genuine demands of Metro employees shud be met, strike wud cause inconvenience to lakhs of people. Strike shud not take place. Whereas govt imposing ESMA as last resort, I wud urge employees to not resort to strike (sic)."

His deputy Manish Sisodia had tweeted, "Have called an urgent meeting of Metro officers to discuss the demands of employees. Also file related to ESMA being sent for concurrence of Hon LG." "Have received instructions from Hon CM @ArvindKejriwal that all the genuine demands of the Metro employees should be met to keep them happy for smooth functioning of Delhi Metro. Also if needed ESMA be imposed to prevent Metro strike," he had tweeted.

Delhi Transport Minister Kailash Gahlot had asked the DMRC to resolve the issues of its non-executive employees who have threatened to go on a strike.