Delhi Election 2020 poll for the 70-member Delhi Assembly got underway today morning, an election that saw the ruling AAP, opposition BJP and the Congress engaged in a bitterly fought high-octane campaign. 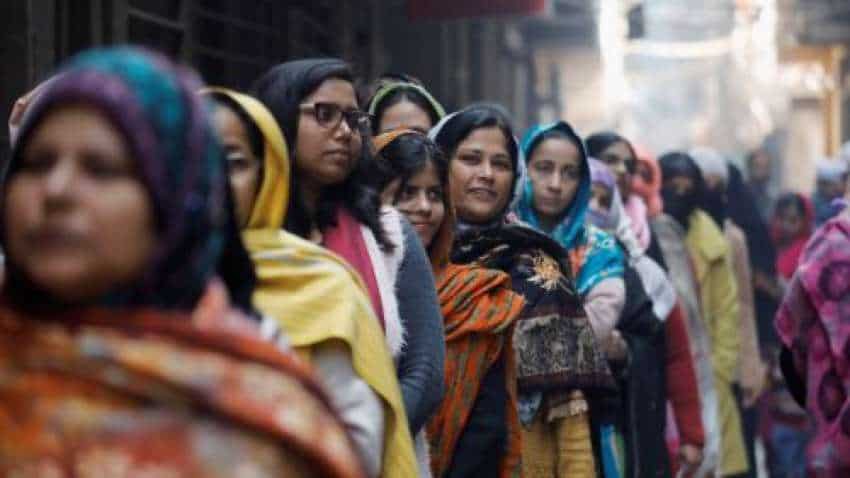 Delhi Election Voter List: Over 1.47 crore people are eligible to exercise their franchise in the polls that will decide the fate of 672 candidates. Photo: Reuters
Written By: PTI
RELATED NEWS

Delhi Election 2020: Delhi recorded a voter turnout of 54 per cent by 5 PM, poll officials said. There was a rise in the voting percentage after initial sluggishness, especially in the morning hours.  The Delhi Assembly Election 2020 for the 70-member Delhi Assembly got underway today morning, an election that saw the ruling AAP, opposition BJP and the Congress engaged in a bitterly fought high-octane campaign. Over 1.47 crore people are eligible to exercise their franchise in the polls that will decide the fate of 672 candidates. The polling began at 8 am and will end at 6 pm, an official said.

"The polling percentage recorded till 5 pm is 54.14 per cent," a Delhi CEO official said. Of the 11 districts, northeast Delhi recorded a turnout of 63.4 per cent, the highest, while New Delhi saw 44.29 per cent, the lowest.

"All of you women do cast your vote and take along men with you. Do discuss with men about voting for whom will be right," the chief minister added.

BJP president J P Nadda also appealed to all the voters to vote in large numbers.

"Each vote of you is important for the unity and integrity of the country and holistic development of Delhi. Your vote only will be script the golden future of Delhi. 'Pehle Matdan, Phir Jalpan'. Jai Hind," Nadda tweeted.

There are 13,750 polling booths, besides one auxiliary booth, located at 2,689 locations across Delhi.

"As far as critical polling stations are concerned, there are 516 locations and 3,704 booths in that category," Singh said.

Besides police security, polling stations falling in the "critical category" have got paramilitary cover. Activities at such stations are being monitored through webcasting, officials said.

All five polling stations in Shaheen Bagh, the epicentre of massive protests against the Citizenship (Amendment) Act, are under critical category.

Counting of votes will take place on Tuesday.

The Aam Aadmi Party is hoping to repeat its stellar performance of the last assembly polls when it won 67 of the 70 seats. The Bharatiya Janata Party, which bagged all the seven seats in Delhi in the 2019 Lok Sabha poll, is aiming to dislodge the AAP, while the Congress is seeking to better its performance than last time when it drew a blank in the assembly polls.