Prime Minister Narendra Modi on Wednesday inaugurated the DefExpo. Here is all you need to know about DefExpo 2020:- 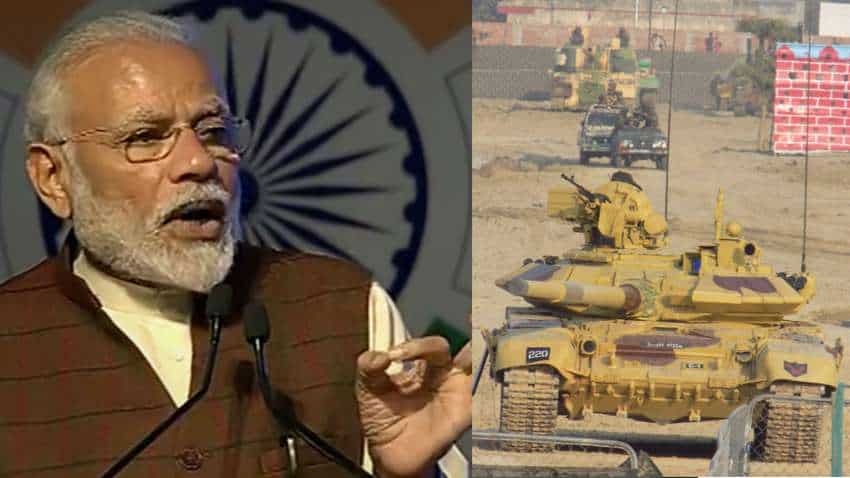 DefExpo, one of the largest events of its kind, is being held for the first time in Lucknow, Uttar Pradesh from 5th to 9th Feb 2020.

Prime Minister Narendra Modi on Wednesday inaugurated the DefExpo. The exposition is India's biennial military exhibition that seeks to showcase the potential of the country to become a global defence manufacturing hub. This is the 11th edition of DefExpo and promises to bring new technologies and solutions on a single platform for defence manufacturing firms from India and abroad. The main theme of the Expo is 'India: The Emerging Defence Manufacturing Hub' and the focus will be on 'Digital Transformation of Defence'. Here is all you need to know about DefExpo 2020:-

- Delegates from 70 countries and 172 foreign military manufacturers will attend the five-day mega exhibition. As many as 856 Indian defence firms will also showcase their products at the event.

- DefExpo, one of the largest events of its kind, is being held for the first time in Lucknow, Uttar Pradesh from 5th to 9th Feb 2020.

Feb 5th 2020: Formal Inauguration of the event by the Prime Minister Narendra Modi, followed by live demonstration of Naval Systems, Aero Systems and Land Systems. Live Demonstration will be done for systems which are designed/built in India.

There will be three parallel business seminars on the opening day. These are being organized by industry associations and business chambers. The themes of the seminars will be, “Skill Development in Aviation & Defence”, “India – France Defence Industry Seminar” and “Indo- Israel -Opportunities in Defence Cooperation- Future Vectors of the Digital Battlefield”.

Raksha Mantri would also be hosting a reception for the guests on the evening of February 5. There will be Night illumination of anchored Navy vessels which will be a visual delight from the Gomati riverfront.

Feb 6th 2020: The fifth India Russia Military Industry Conference will be held on the sidelines of DefExpo 2020 at the venue. Over 100 Russian and over 200 Indian industry leaders are expected to participate.

There will be live demonstration of large platforms and also flying display at the Gomti riverfront and the DefExpo venue.

Feb 7th 2020: Bandhan, a ceremony for signing of MoUs, launch of products and major announcements, will be presided by Raksha Mantri Rajnath Singh.

Feb 8th 2020: The DefExpo would be open for public. There will be live demonstration of large platforms and also flying display for appreciation by general public.

Arrangements for local transport have been made with the help of Government of Uttar Pradesh.

Feb 9th 2020: Live demonstration and display of large platforms for appreciation by general public. Entry will be free for general public on February 9th, 2020DefExpo concludes.

The show will be marked with numerous attractions such as:-

Live demonstrations of the services, DPSUs and industry showing the land, naval, air and internal security systems in action. Live demonstration will be held at two locations viz. one at the exhibition site and the other at the Gomati river front. There will be no damage to the environment during the Gomati River Front display.

Ministers from 15 African countries shall participate in the conclave.

-For this exposition, technology has been used as an enabler and for the first time the DefExpo App was released by Raksha Mantri Shri Rajnath Singh on December 27, 2019 which is available on Apple App Store and Android Play Store. The main features of the app are to ‘inform, engage and feedback’. It provides detailed information about the day-to-day events; participating exhibitors; DPSUs, guest speakers of seminars/webinars; publications i.e., electronic brochures and e-books; maps and directions of the venues and city weather.

-DefExpo Inaugural Ceremony would be webcast on social media platforms including Facebook, Twitter, Periscope, etc. This will be showcased to live audiences in Indian Embassies across the World.

-Arrangements have been made for 5,000 college students from various technical colleges of UP for visiting during business days. This is being done to inculcate interest among them.

-There will be Instagram photo competition during the business days of the exposition. The best selected photographs by a jury shall fetch the participants cash prizes of Rs one lakh. The second and third prize will be Rs 75,000 and Rs 50,000 respectively.

The DefExpo 2020 is being organized by Department of Defence Production, Ministry of Defence. Full support is being received from Government of Uttar Pradesh.

Schedule of the event can be accessed from the following URL: https://defexpo.gov.in/assets/pdf/ProgrammeSchedule.pdf