Manish Bhatnagar, Managing Director, SKF India, talks about Q1FY22 numbers, the segmental performance of the company, plans related to freight wagons space and rewarding the shareholders among others during an interview with Swati Khandelwal, Zee Business. 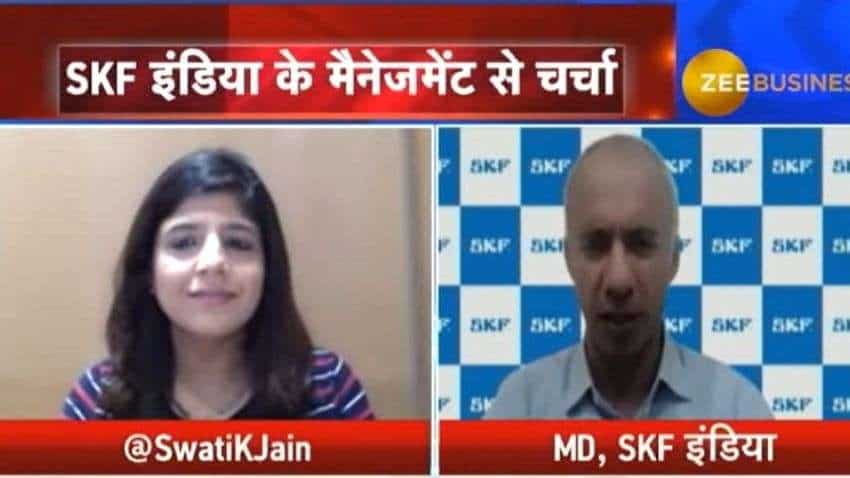 Manish Bhatnagar, Managing Director, SKF India, talks about Q1FY22 numbers, the segmental performance of the company, plans related to freight wagons space and rewarding the shareholders among others during an interview with Swati Khandelwal, Zee Business. Edited Excerpts:

Q: Provide details of the quarter numbers? Has the lockdown enforced due to CORONA has had an impact on the numbers on a quarter-on-quarter basis or the rising commodity cost is a reason for it? But year on year, the numbers are good.

A: Year-on-Year comparison is not correct because we all know what happened last year. On quarter-on-quarter, the second wave of CORONA that has just ended or is about the end has had its impact on the numbers, especially in retail markets. We have automotive aftermarket business and industrial aftermarket business; both have been affected because there were lockdowns in many cities and shops were shut and it had an effect. The business of OEMs has been quite intact as in the previous quarters. On margins, rising steel prices are a matter of concern for us. We have talked to a few customers and price increase is happening at places, while it is not happening at some places but that is certainly a concern. But steel prices have normalized now and have stabilized. So going forward, we may see less steel inflation. Freight and logistics cost is another thing and we have seen a lot of increase on the front and that also impacted our numbers in the last quarter. Going forward, the rest of the year, the second wave will come to an end, hopefully, the third phase is not there, we hope to see an improvement in both revenue and of course the margin. Automotive have by and large shown good recovery, two-wheelers are doing well, cars will pick up now and new models are being launched. Commercial vehicles, of course, has not been such a big rosy story and the problems that existed in the pre-COVID era is continuing. That is all on the automotive front.

In the case of industrials, railways is where we are banking on big roles with passenger traffic picking-up and the DFC that is about to start, few lines have been started and remaining lines are likely to become operational in this year or by the first half of the next year and that will also help us. The new bearings that we have the Class K bearing will help us on the freight side

Q: We would like to understand the segmental performance of the company over the last three to four months?

A: We have two segments (i) automotive and (ii) industrial. Automotive is 50% and industrial is the other half. The growth of automotive started after the first wave due to the pent-up demand that we saw last year around September and October mainly in two-wheelers and that is continuing. Passenger vehicles were not quite well last year but it is much better this year and several new models have been launched and that also helps the consumer sentiment. So, the passenger vehicle is picking up. The commercial vehicle segment is not doing well, at all. They were facing problems even in the pre-COVID era as Axle Load norms were changed and policy issues were also available. We will not be able to see such a pickup for another two years from here. On the industrial side, railways passenger traffic will pick up, so we will see railway coaches doing well. In the case of freight, when DFC will open by the end of the year or the start of next year, DFC will help us in selling more of our large higher load K class bearings. On the other industrials, general machinery, pumps, drives and motors are doing well and that is important because pumps, machinery and pumps, drives and motors are a good proxy for a good industrial economic activity. When they do good, it means that the industrial activity has picked up and we are seeing the same in the case of manufacturing activity. Metals are doing well, mainly steel and aluminium. And of course, the consumer-facing industry like textile and F&B are doing very very well.

Q: Update us about the company’s plans in the freight wagons space?

A: Freight is about the new DFC (dedicated freight corridor) that is being developed around the country. Two to three lines of the same are operational by now and the rest of the lines will be operational by the end of this year or the first half of the next year.

It is an important development because India is a country where around 14% of our GDP is linked with logistics and that is a very very high number. Most countries, which are of our size is about 7-8% and reason for 14%, not 7% is that the road traffic and road freight are quite high in our country and rail freight is quite low. Rail freight will increase when DFC will be in place as it will reduce our costs. In that DFC, mainly freight wagons are the ones that will use large wagons with mould load capacity. Mould load capacity means the bearings have to also be able to take a higher load and we have high load bearings, and we call them Class K bearings. So, DFC is linked to the sale of higher-margin or better prices on Class K bearing and that is where we hope to gain significant market share.

Q: Do you have any plans to reward the shareholders in terms of bonuses or buyback?