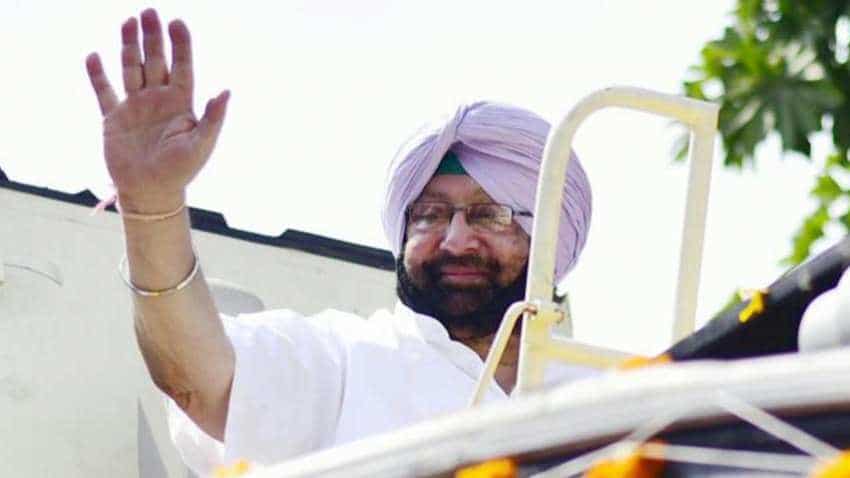 Amarinder Singh appealed to protesting employees to resume their duties immediately in the interest of people, Photo: IANS
Written By: PTI
RELATED NEWS

Punjab Chief Minister Amarinder Singh Friday evening appealed to protesting employees to resume their duties immediately in the interest of people. He also promised to implement the decisions to be taken by the committee of ministers on employees' issues in letter and in spirit The appeal came after the work in various government departments suffered across the state because of an indefinite strike of employees. Punjab government employees Friday continued their indefinite strike for the second day demanding clarity on the dearness allowance issue.

The chief minister reviewed the decisions taken by the committee, comprising Health minister Brahm Mohindra, Finance minister Manpreet Singh Badal and Technical Education minister Charanjit Singh Channi, and reiterated the state government's commitment to all employees with an aim to protect their interests and welfare.

According to the chief minister's media advisor Raveen Thukral, he made it clear after the review meeting that the decisions taken by the committee of ministers shall be implemented in a time-bound manner, and urged the employees to give up their strike immediately and work with diligence in the interest of the people of Punjab.

Amarinder Singh clarified that despite the financial constraints of the state government, seven per cent DA had been released to all employees with effect from February 1, 2019, as decided by the committee of ministers after a meeting with the Punjab State Ministerial Services Union.

Further, the balance of the DA and its arrears will be released in due course as and when the financial position of the state government improves further, he said, assuring all employees that their welfare was highest priority for his government.

The chief minister lamented that the state government had not been able to meet some of its financial commitments to employees due to the legacy of high debt it had inherited from the previous regime.

Further, it was decided that a committee headed by retired IAS officer D P Reddy along with secretary personnel and secretary expenditure shall look into the new pension scheme that was implemented for employees recruited after 2004, Thukral said.

The employees have been protesting against the state government's alleged failure in accepting their demands which include regularisation of contractual employees, reducing the term of probation period, restoration of old pension scheme, among others.

"No office work took place in majority of the government departments in the state," claimed Sukhchain Singh Khera, president of the Punjab Civil Secretariat Staff Association.

He said more than one lakh employees across the state had gone on strike on Thursday.

Several organisations under the banner of Punjab State Ministerial Services Union and Punjab Secretariat Union have participated in the strike.

Khera said the employees have been fearing that the state government was trying to de-link their DA from the one announced by the Centre for its employees.

"The government should not de-link it as it is an anti-employee move," he said.

The state government had already given seven per cent DA to employees and pensioners.

He also accused the state government of not implementing their eight demands which had been accepted last month.

Khera claimed that several other associations, including teachers' unions, drivers' unions, Patwari unions, have extended their support to the strike.