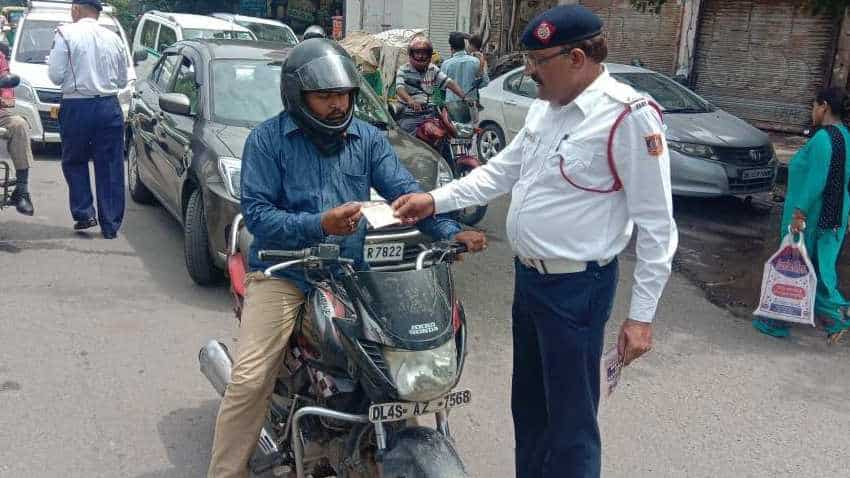 The changes in the law have been made to change road behaviour and improve road safety. Representational Image, Source - Delhi Traffic Police.
Written By: ZeeBiz WebTeam
Edited By: Harish Dugh
RELATED NEWS

Delhi Police Constable Result 2021: Candidates check how to view results at ssc.nic.in and all other details here

The Delhi Police was highly active on Sunday - the day the amended Motor Vehicles Act came into effect - catching a huge number of traffic rule breakers by surprise. A Delhi police official told PTI that it had issued 3,900 challans to traffic rule violators after the amended Motor Vehicles Act came into effect on Sunday. The data has also been shared by the traffic police. The Delhi government will hold consultations with stakeholders, including traffic police, before issuing compounding notification with regard to implementation of the Motor Vehicle Amendment Act, Transport minister Kailash Gahlot said.

"Since heavy penalties have been prescribed under the Act after a gap of many years, the compounding notification will be issued with serious consultation with traffic police and other stake holders," Gahlot said in a statement. The Motor Vehicles (Amendment) Bill, 2019 was passed in the parliament in July and seeks to tighten road traffic regulations such as the issuance of driving licence and imposed stricter penalties for violations in an attempt to improve road safety.

The changes in the law have been made to change road behaviour and improve road safety. Section 200 of MV Act authorizes the Delhi government to issue a gazette notification for compounding of certain offences, indicating as to who will be the person who can compound the offence.

How you can avoid penalties

It is quite easy! All you have to be careful about is not doing a few things. Those who do end up as violators, will have to pay hefty amounts to cops!

After the implementation of new rules, people not wearing helmets will attract a fine of Rs 1,000. Those driving without a licence can be fined Rs 5,000 or face three-month jail. Penalty for travelling without ticket has been increased from up to Rs 200 to Rs 500. Unauthorised use of vehicle without licence carries a penalty of up to Rs 1,000 to Rs 5,000.

Individuals driving without licence will be fined from up to Rs 500 to Rs 5,000. Speeding violations will cost light motor vehicle drivers from up to Rs 400 to Rs 1,000, Rs 2,000-Rs 4,000 to medium passenger or goods vehicles and impounding of vehicle in case of further offences. Penalty for rash driving has been increased to imprisonment of 6 months-1 year and/or fine of Rs 1,000-Rs 5,000 for first offence and imprisonment up to 2 years and/or fine of up to Rs 10,000 for second offence.

Delhi Police Constable Result 2021: Candidates check how to view results at ssc.nic.in and all other details here