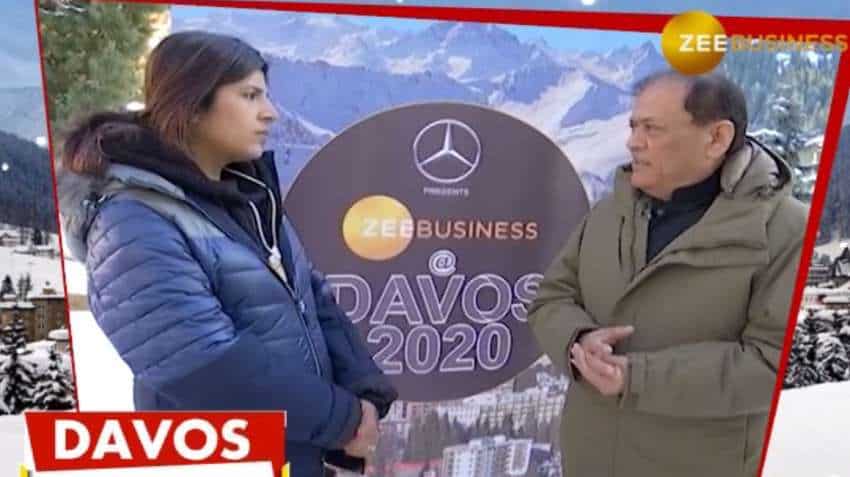 Mahendra Singhi, MD & CEO, Dalmia Cement (Bharat) Ltd., talks about Davos 2020 (#ZeeBusinessatDavos) theme and steps that his company has taken to meet it as well as budget expectations during an interview with Swati Khandelwal, Zee Business, on the sidelines of the World Economic Forum 2020, Davos (#ZeeBusinessatDavos). Excerpts:

Q: Davos 2020 theme revolves around sustainability and stakeholders collaborations for greener & cleaner environment. Everyone is talking about to fight climate change and global warming as one world. How do you see this theme and what is the role- that your company will play on this endeavour?

A) World Economic Forum has been meeting at Davos (#ZeeBusinessatDavos) for the past 50 years and the environment and climate has always been white here. The speciality is that the year's agenda is 'Green'. It turned Green because when the assessment of the world was conducted then the first identified risks included environment, climate change and sustainability. I am happy to see that the World Economic Forum has adopted this agenda as the world has started thinking about it and working on it. The best part is that India, Indian companies and the government are also working on it. The way things are being discussed during the meetings at the forum gives a sense about what can be done on climate change and how it will be done to secure the future of our children. At the same time, I would like to inform you that the promoters of our group, Dalmia Bharat Group, has always been to create a green world even though we are into the process of making cement by taking care of greenery and the environment. Following which we created a policy (about 5-6 years ago) that we should be sustainable and this has helped us in having the least carbon footprints in the global cement sector. And, if we have a look at the global average of carbon footprint then our carbon print is 40% less than the average. This means, we are efficient enough to use the energy in the best possible manner and taking a step to rectify the cement process.

Q: How India can take care of the green environment amid construction activities that India will see in time to come?

A: Indian government has taken several proactive steps on it including the nationally determined contributions (NDCs) at the UN after the Paris Climate Agreement. If we have a look at the big economies than the NDCs of the Union Government is compliant to the Paris Agreement. This means the government will be able to project that it is taking the right steps at the 26th United Nations Climate Change Conference (COP 26) scheduled to be held in the United Kingdom. At the same time, I would like to inform you that the cement sector of India is very progressive and cautious about being energy efficient by reducing the usage of coal and use alternative/green fuel under which it tries to use someone's hazardous waste, municipal waste and plastic wastes among others. So, the sector has worked a lot on that front.

The green rating agency, CDP, has prepared a report on the global cement industry and has named five Indian cement companies among the top 10 cement companies of the world that is ready for low carbon economy. Interestingly, Dalmia Bharat is the first company on the list. We have proved ourselves in the world that clean and green is profitable and sustainable. This means our profitability is highest in the Indian cement sector despite having low carbon footprints.

Dalmia Bharat is one of those companies in the world who has designed a roadmap to be carbon negative by 2040. In the process, solar power and green fuel will be used in place of coal and we capture CO2 and turn them into the raw material. We have set an example in the world. Interestingly, the United Nations during the climate summit held on September 23, 2019, has called us on the stage, where we informed how we are working. Besides, the cement sector has seen 1-2% de-growth until November 2019 due to the slowdown in the economy. But, it has revived from December and this revival has increased the prices.

Q: Do you think there will be more price hikes in the offing?

A: No one can provide projections related to the price hike as is dependent on demand and supply. No one, yet, has been able to guess the price depreciation rightly nor the increase. But I think that the prices which went down will attain its normal levels if the demand remains good. You will be astonished to know that cement is sold at a rate of Rs6/kg and hopefully there is no such commodity that is sold at such low prices.

Q: What are your expectations from the budget and what are the things on which the finance minister must focus while presenting it?

A: The finance minister and the Modi-government should look on the ways to revive the entire economy. We don't want to have any specific demand for the cement industry but with the real estate sector comes back on track and activities should increase housing for all. The government should put its money into the economy without fearing about the fiscal deficit. More activities in the real estate sector are likely to revive the entire economy. I have a faith that a good budget (#BUDGET2020ZEE) will be presented this year and the faith is based on how the finance minister and the prime minister has talked with the industry and other sectors.