Cyclone Vayu slows Mumbai! Several flights delayed - Here is what you must know

Many flights were either diverted or delayed travelling to and from Chhatrapati Shivaji International Terminus. 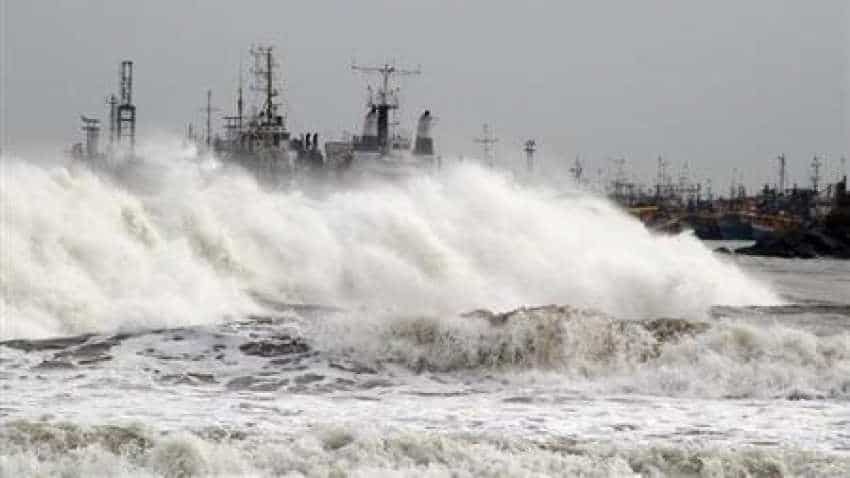 The next 24 hours seem to be very critical for Mumbaikars as cyclonic storm 'Vayu' approaches the city. Photo: Reuters

The next 24 hours seem to be very critical for Mumbaikars as cyclonic storm 'Vayu' approaches the city. This storm which has emerged in Arabian sea on Tuesday morning is expected to hit few regions of Maharashtra. However, it will more severe in Gujarat. As for Mumbai, high tides and massive rains will decide road, rail and air traffic. The Skymet and IMD have reiterated that Vayu will not impact the Indian financial hub extensively but heavy rains will be reflected. Interestingly, the impact of Vayu has already been witnessed in Mumbai with few accidents and train delays. The airlines have been the worst hit, especially during the midnight of Monday. Many flights were either diverted or delayed travelling to and from Chhatrapati Shivaji International Terminus.

If you look at the arrival and departure status from Monday midnight at Mumbai airport, then majority of flights were delayed between 12am to 3pm, and continued up till 12pm. In fact, about 89 flights were delayed from departure at this airport. A similar pattern was also seen for flights arriving at the airport, as approximately 92 airlines so far have been delayed. Air carriers affected were majorly domestic ones such as SpiceJet, Indigo, GoAir, Vistara including AirAsia.

The situation does not seem to end for air passengers, as GoAir had already via its Twitter account warned passengers for flight delays from and to Mumbai ahead. Not only this, Skymet expects rain to get heavier in Mumbai, from Tuesday afternoon or early evening. If that is the case, then many flights will be further delayed.

Skymet in its report said, “The typical Pre Monsoon rains in Mumbai, which had been much awaited for quite a while now, are finally here. Rain in Mumbai began during the evening hours and it was the suburbs which started to see rainfall activity first wherein Kharghar, Vashi, Sanpada began observing thunderstorm activities.”

“Rain belt then covered more areas and almost the entire city started to see Mumbai rains making an appearance. This is the first good Pre Monsoon rainy spell which has made an appearance and is expected to continue for a couple of more days now,” it added.

However, as per Skymet, rains have occurred in view of the the deep depression over east-central and adjoining southeast Arabian Sea which is all set to intensify into Cyclone Vayu by the morning of June 11. The system is currently, 650 km south­-southwest of Mumbai and 850 km south-­southeast of Veraval.

Overall, Skymet highlights that, Cyclone Vayu would be abeam Mumbai today afternoon but would escape the fury of Cyclone Vayu.