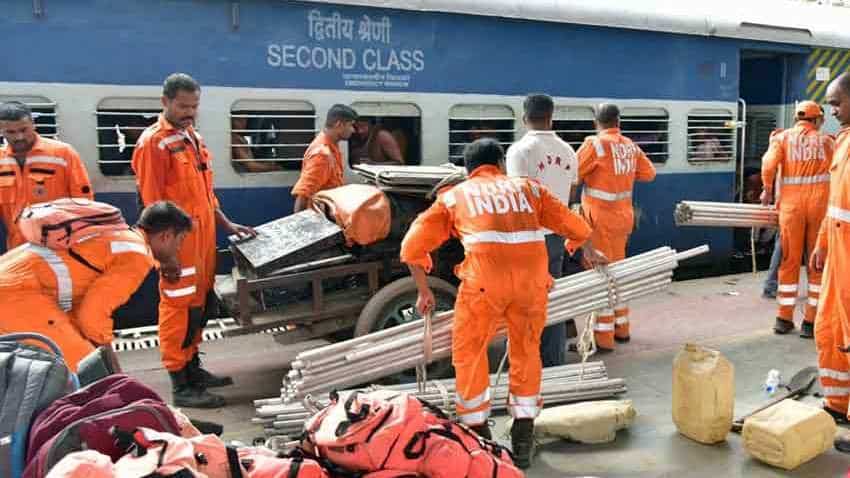 A team of NDRF at Ahmedabad Railway Station preparing to leave for Saurashtra by road with emergency and rescue material. Source -IANS.

The Indian Railways has cancelled as many as 70 trains and will short terminate 28 others due to Cyclone Vayu, the Western Railways said Wednesday "Considering the alertness for Cyclone Vayu over Gujarat, the Western Railway has decided to fully cancel operation of 70 mainline trains, while 28 other mainline trains will be short terminated with partial cancellation as a precautionary measure in the cyclone prone areas," the railways said in its bulletin. Apart from this, the Western Railway is also taking various safety and security precautions for train passengers of these prone areas under its jurisdiction -- Veraval, Okha, Porbandar, Bhavnagar, Bhuj and Gandhidham.

Veraval-Amreli Passenger, Amreli-Junagadh, Delvada-Veraval are some of the trains that have been cancelled on Wednesday and Thursday. Here is the full list of trains cancelled due to Cyclone Vayu.

The state government has launched a massive evacuation exercise to shift about three lakh people from low-lying areas of Saurashtra and Kutch regions.

The cyclone was expected to make landfall in Gujarat on Thursday morning but changed its course. However, it will still cause heavy rain in several coastal districts of the state. The state government, as a precautionary measure, has evacuated over three lakh people living in low-lying areas and thatched houses in the coastal districts. "It (Cyclone Vayu) may not make landfall. It will only skirt the coast. It has made a small deviation. But, its effect will be there with strong winds and heavy rain," Secretary at the Ministry of Earth Sciences M Rajeevan said.