In his interaction with lawmakers at the White House, Trump said the Reciprocal Trade Act would give US workers a fair and level-playing field against other countries. 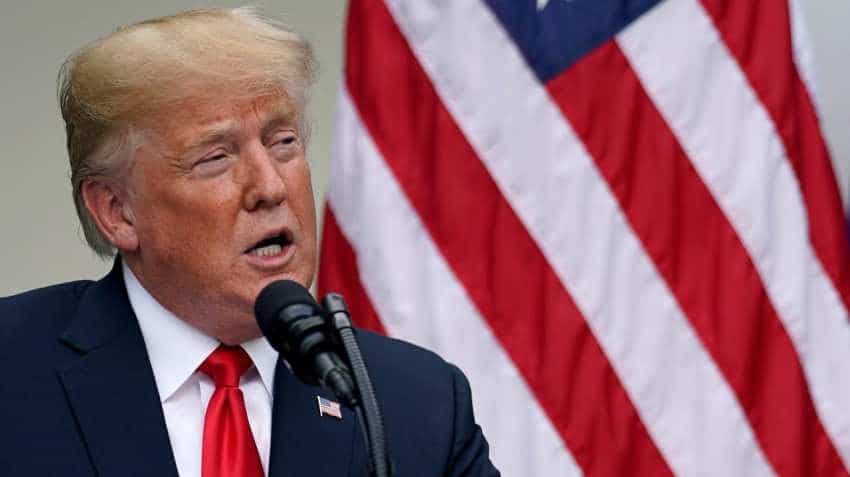 Trump said the Reciprocal Trade Act would help to solve the problem once and for all. "Whatever the tariff for a foreign country is, we place the same tariff on us." Reuters
Written By: PTI
RELATED NEWS

President Donald Trump has said he struck a "very fair deal" with India by making it cut the tariffs on the iconic motorcycle Harley-Davidson by half in just about two minutes, but rued the "high" Indian duties on American whisky.

India in February last year slashed the customs duty on imported motorcycles like Harley-Davidson to 50 per cent after Trump called it "unfair" and threatened to increase the tariff on import of Indian bikes to the US.

At a White House event on the Reciprocal Trade Act on Thursday, Trump flashed out a green colour board with examples of non-reciprocal tariffs from various countries.

"Look at motorcycles as an example. (In) India, it was 100 per cent. I got them down to 50 per cent, just by talking for about two minutes. It's still 50 per cent vs 2.4 per cent (on imported motorcycles to the US).

Again, other than that, it's a very fair deal," the president said. Trump, however, pointed out to the high tariff by India on import of wines.

"India has a very high tariff. They charge a lot of tariffs. You look at whisky... India gets 150 per cent, we get nothing."

In his interaction with lawmakers at the White House, Trump said the Reciprocal Trade Act would give US workers a fair and level-playing field against other countries.

The Reciprocal Trade Act, which Trump was expected to highlight in his now-delayed State of the Union address, would give him authority to levy tariffs equal to those of a foreign country on a particular product if that country's tariffs are determined to be significantly lower than those charged by the United States.

It would also allow Trump to take into account non-tariff barriers when determining such tariffs. Trump alleged that many countries all over the world has taken advantage of the US.

"They charge us tariffs and taxes, the likes of which nobody has any understanding. They are so high and so unfair! They also have barriers where we can't go in. They have trade barriers that make it impossible for us to sell our farm products and our other products.

"Whether they think we're very nice or not so smart, they've been doing it for many, many years and we want to end it. Many of these are friends, many of these are allies... But, sometimes, allies take advantage of us even more so than our non-allies," he said.

Trump said the Reciprocal Trade Act would help to solve the problem once and for all. "Whatever the tariff for a foreign country is, we place the same tariff on us."

"What's going to happen, I think, from a practical standpoint, is they won't be charging us tariffs anymore. We'll see. Or we'll charge them a lot. Tremendous amount of money," he said.

The Reciprocal Trade Act will be an incredible tool to bring foreign countries to the negotiating table and to get them to lower tariffs on US products and also to get rid of their trade barriers, the president asserted.

America cannot lose almost USD 800 billion on trade like has been done for many years, he said.

Congressman Sean Duffy, who introduced the Reciprocal Trade Act, has put granite from India in his global list of non-reciprocal tariffs.