CSE reveals new normal for India, says dust storms will be bigger in 2019

If you feel that the deadly dust storms that claimed lives of nearly 500 people in the densely-populated north Indian plains has come to an end and will not repeat in 2019, then you are mistaken, says think tank CSE 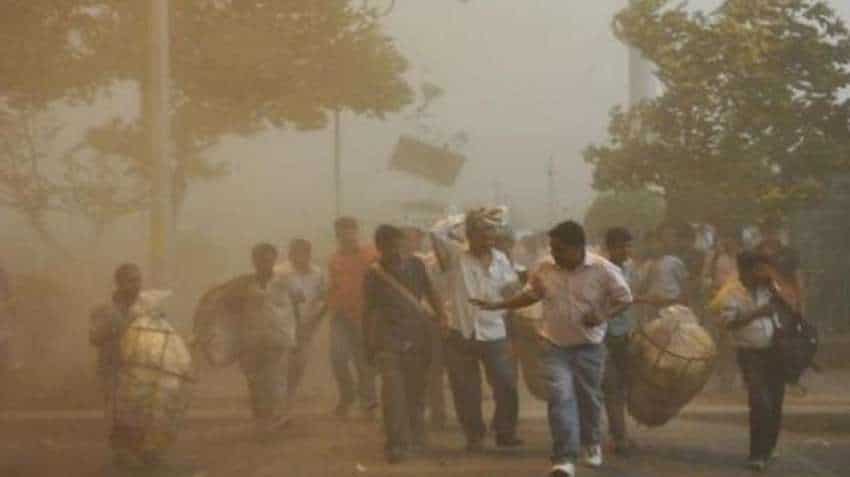 Actually, Center for Science and Environment (CSE) believes that the nature of the winds will be even more extreme in the coming times. Image source: PTI
Written By: ZeeBiz WebTeam

If you feel that the deadly dust storms that claimed lives of nearly 500 people in the densely-populated north Indian plains has come to an end and will not repeat in 2019, then you are mistaken, says think tank CSE. Actually, Center for Science and Environment (CSE) believes that the nature of the winds will be even more extreme in the coming times.

Data on thunderstorms that struck India in 2018

Since February 2018, there have been 44 incidents in 12 states. These storms have claimed lives of about 500 and have injured at least 800 people across the country. According to a report by CSE's Publications DOWN TO EARTH, these storms have damaged 5,000 homes and there was a considerable loss in crops too. The report also claims that the speed of winds went up to 130 km/hr in some areas.

The report claims that there was a considerable loss of standing crops in about 0.7 million hectares of land in states like Uttar Pradesh, Madhya Pradesh, Maharashtra, Bihar, Telangana, Chhattisgarh and Jammu and Kashmir. Maximum losses were done in Uttar Pradesh and Rajasthan.  CSE says that the dust storms in north Indian plains are the 'new normal', which means that such deadly storms will continue and these events will go on worsening.

"These extreme events are going to become repetitive and will come every year. And the nature of their disruption will keep worsening, especially if steps are not taken to improve the environmental conditions of the country. These events are deadly indeed. In last three months, from April to June 2018, there were 50 dust storms that claimed lives of around 500 people across the country" said Sunita Narain, DG, CSE. She added, "these dust storms have ruined the fields and damaged homes. It does not have any data. We have not seen such devastation yet. We have seen dust storms, earlier, but they never came with such an intensity and frequency."

CSE says human interference with the environment is a cause of the dangerous dust storms. Examples of human interference include felling of trees and misuse of groundwater in large quantities. These two interference has resulted in the reduction of moisture in the soil and slowly they are turning up to be sand. The changing climatic conditions will have an impact on the normal activities of the weather and have turned winds into dangerous storms.

Sunita Narain, DG, CSE says "Earlier, we used to get a storm and we termed it as Western disturbances as they used to come from the West. But the changing climatic conditions have changed the face of the attitude of those storms. Earlier, it used to come in the month of January and February but today, they reach here in the month of April, May and June". She also added, "On the other hand, there is an increase in activity in the Bay of Bengal. The winds rising from the ocean are becoming very horrible due to the increased temperature over the oceans. So you can imagine that we are facing two different types of storms and they are western disturbances as well as the storm coming from the Bay of Bengal. The collision of the two, at in case of the conditions that have been created at the ground level, will give birth to these dust storms.

CSE believes that these thunderstorms will bring maximum losses in Uttar Pradesh. It will also have an impact in Rajasthan but will not have been able to devastate the state in the same scale because the residents of the state are aware of the process of surviving during the storms. In case of Delhi-NCR region, these storms will have poisonous effect in the already-lethal air pollution.

However, the Meteorological Department says that the country will not be able to see more thunderstorms in 2018.  The frequency of the dust storms of the year was higher than the frequency of storms of the previous year. It has resulted in deaths, of which few were the result of lightning while others were the outcome of the high winds which resulted in uprooting the trees", says Charan Singh, Scientist, MET Department. He also added, "the possibility of dust spell in north-west India is now very low or not as the ongoing monsoon has created moisture in the region.

Environmentalists say that the Aravali mountain range plays an important role in stopping the dust storms in the Delhi-NCR region of the country. It works as the natural barrier to stopping the desert from growing. And there is a need to save the range from illegal mining and deforestation. Experts feel, that destruction of Aravali will lead to an increase in the size of the desert, which will lead to an increase in the intensity of the dust storms.