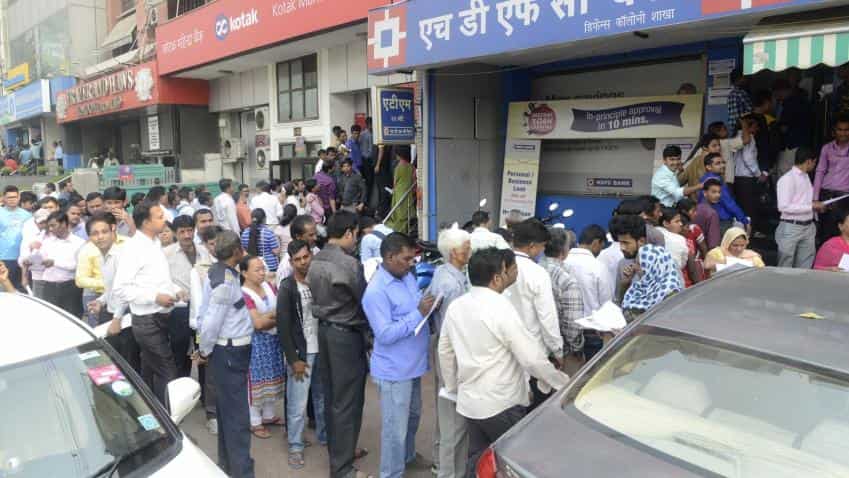 It can be noted that the credit growth in financial year 2016-17 is the lowest since 1953-54. Photo: IANS
Written By: PTI
RELATED NEWS

Saddled with high bad debt and weak corporate demand, credit growth plunged to a whopping six-decade low of 5.08% in the financial year 2016-17, as against 10.7% a year ago, according to the Reserve Bank data.

For the year to March, banks' outstanding credit stood at Rs 78.81 trillion compared to Rs 75.01 trillion as of April 1 2016, show the central bank data. The numbers are surprising as the economy has been clipping at close to 7% during the year under review and interest rates have been heading south.

One main reason for the massive plunge is the rising corporate bond market from where companies are tapping funds even for working capital as most of them could have been turned away by banks due to their over-leveraged balance sheets.

In the year to March 2016, banks reported a credit growth of 10.69% at Rs 75.30 trillion.
According to domestic rating agency Icra, the outlook on the asset quality of the banking sector seems to be weak even as the fresh non-performing asset (NPA) generation rate continues to show signs of moderation.

Fresh NPA additions to gross NPAs during Q3 of fiscal 2017 inched down to Rs 26,400 crore compared to Rs 1.36 trillion during the first nine months of the fiscal 2017, partly aided by higher write-offs during the last quarter.

Warning of more pains on the restructured accounts, specially those under the 2/25 scheme, Icra said, of the 40 large borrowers with a total debt of Rs 3.16 trillion, 29% of the debt turned NPA till December 2016.

Bank deposits, however, grew by 11.75% during fiscal 2017, helped by large flow of funds into the banking system after demonetisation of high value notes last November. Outstanding bank deposits stood at Rs 108.05 trillion as of March 31, 2017 as against Rs 96.68 trillion on April 1, 2016. Last financial year deposits grew 9.72%.

It can be noted that the banking system is saddled with close to Rs 14 trillion of bad loans, including those turned dud after restructuring. This is almost 15% of the system.