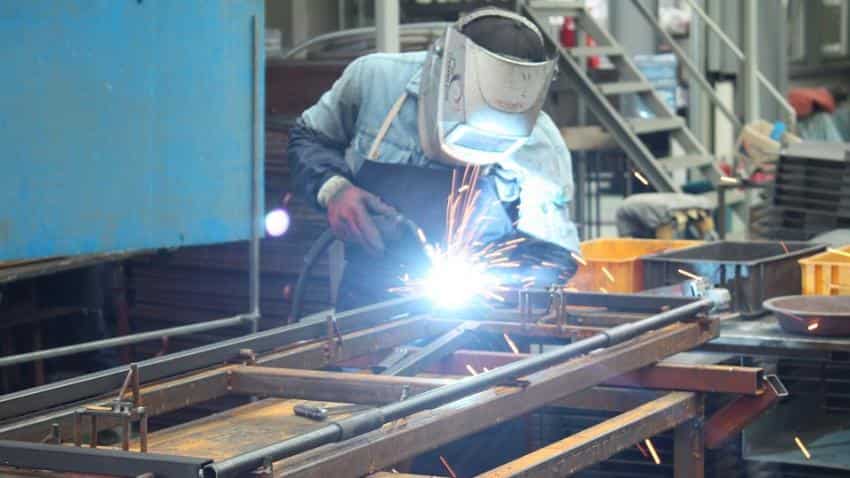 As per the last data, IIP for the month of February fell by 1.2% on year-on-year basis. Photo: Pixabay
Written By: ZeeBiz WebTeam
RELATED NEWS

In the last monetary policy review on April 6, the Reserve Bank of India had said that it expects headline CPI inflation to undershoot the target of 5% for Q4 of 2016-17 in view of the sub-4 per cent readings for January and February. For 2017-18, inflation is projected to average 4.5% in the first half of the year and 5% in the second half.

Sharing views on retail inflation, Nikhil Gupta, Analyst at Motilal Oswal Securities, in a research report said,"We believe that CPI inflation may remain under 4% for a few more months. We expect CPI to move up approximately, 4.5% for full-year FY18, similar to FY17. In case, there is unfavorable monsoon, inflation could inch up to 5%. Considering this, we believe that there is a room for at least one rate cut by end-2017."

Having similar views, Icra in its research report said said that food d prices have displayed a varied trend in the ongoing month, with an MoM hardening in prices of sugar and milk, a mixed trend for various vegetables and pulses, and a downtrend for several cereals and oils.

Petrol and diesel prices were cut sharply at the beginning of April 2017. However, a reversal may be expected in the second half of the month, with crude oil prices in INR terms having risen in the last week. While the INR has continued to appreciate relative to the USD, this is likely to have a smaller impact on the CPI inflation compared to the WPI inflation, with a larger proportion of imports as well as commodities whose prices track global trends, in the latter.

"The trajectory for the CPI inflation indicated by the RBI, builds in a hardening of inflation from H1 FY2018 to H2 FY2018. Moreover, the impact of key inflation risks such as monsoon dynamics and the goods and services tax won't be clear for at least a few more months, which suggests a high likelihood of a prolonged pause for the policy rate," the report said.

As per the last data, IIP for the month of February fell by 1.2% on year-on-year basis, as against the estimate of 1.3%.

Outlook ahead for IIP is robust, as per 77th round of RBI's  industrial outlook survey, it is indicated that overall business sentiment is expected to improve in Q1 of 2017-18 on the back of a sharp pick up in both domestic and external demand.

Giving outlook for current fiscal, Motilal Oswal Securities, in the report said, that although IIP has always been very volatile, they expect it to recover gradually in FY18 and grow ~3%. For March 2017, we expect IIP to post growth of 2%, implying full-year growth of 0.6% in FY17.

However, Icra, in its research report said, "Available data for March 2017 paints an improved picture, with resumption of growth in auto production, and higher growth of coal output and electricity generation, as well as in non-IIP indicators such as cargo handled at major ports and consumption of some fuels, suggesting a receding impact of the note ban. Accordingly, the IIP is likely to post a pickup in March 2017 relative to the marginal 0.3% growth in March 2016 and the initial contraction in February 2017."