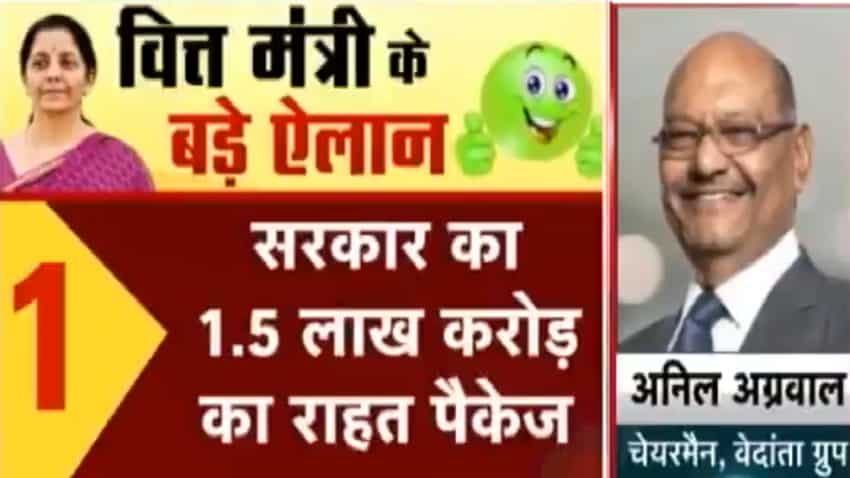 Anil Agarwal said that even though companies are sitting on cash, they are not able to invest even at zero rate of interest. Image source: Zee Business

Vedanta Resources Chairman Anil Agarwal today termed the corporate rate cut announcement by FM Nirmala Sitharaman, from 30 percent  to 22 percent, as unbelievable good fortune. He added that this is a much-needed booster dose for the Indian economy after data released by the government recently stated that India's gross domestic product (GDP) increased by just 5 percent in the first quarter of the financial year 2020. The cut has been even bigger for the new manufacturing companies at 15 percent from the previous rate of 25 percent.

Agarwal, in a conversation with Zee Business Managing Editor Anil Singhvi said that this development shows that the government is making efforts to revive the economy at a time when economic sentiment was down and investors are not putting in money in new projects fearing the slowdown may continue.

Agarwal added that there is big amount of money lying idle in foreign countries and this step will help bring investments in the country as investors are searching for an avenue where they can invest their money. Agarwal said that even though companies are sitting on cash, they are not able to invest even at zero rate of interest. Citing the example of China, Agarwal said companies are not investing even in China and the reason for that are trade uncertainties.

Agarwal said that Vedanta paid Rs 2 lakh crore tax in the last five years and the government should give boost to the natural resources sector so that the imports could be brought down, which will generate a lot of employment opportunities in the country.

The steps announced by Finance Minister Nirmala Sitharaman will have a Rs 1.45 lakh crore bearing to the government's exchequer.

Social Stock Exchange: What it is? How it works? Big questions answered about new financing paradigm