Germany`s economy, Europe`s largest, will probably shrink by 9.8% in the second quarter, its biggest decline since records began in 1970, due to measures imposed to slow the spread of the novel coronavirus, the country`s leading think tanks said on Wednesday 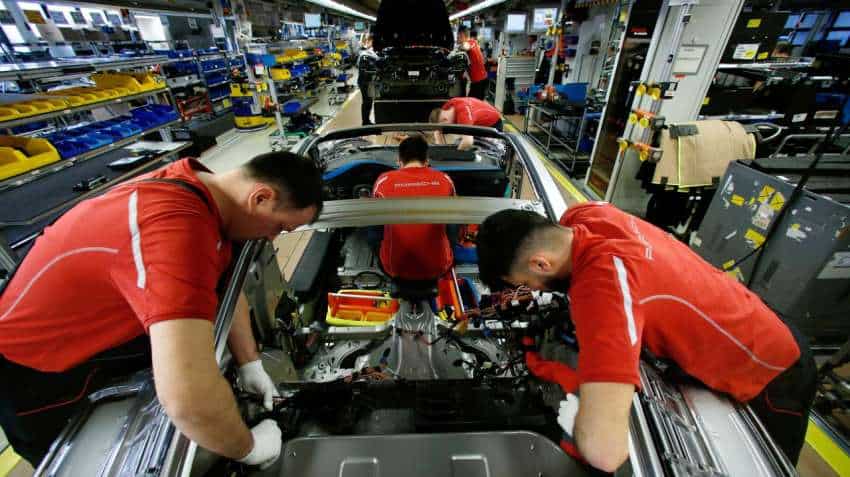 Germany has been in virtual lockdown for several weeks. Schools, shops, restaurants, sports facilities and other non-essential businesses have closed and many companies have halted production. Source: reuters
Written By: Reuters
Edited By: ZeeBiz WebTeam
RELATED NEWS

Germany`s economy, Europe`s largest, will probably shrink by 9.8% in the second quarter, its biggest decline since records began in 1970, due to measures imposed to slow the spread of the novel coronavirus, the country`s leading think tanks said on Wednesday.

That would be more than double the drop seen in the first quarter of 2009, during the global financial crisis, the economic institutes said.

Germany has been in virtual lockdown for several weeks. Schools, shops, restaurants, sports facilities and other non-essential businesses have closed and many companies have halted production to help slow the spread of the disease.

"It is not unlikely that the crisis will drag on longer than expected and lead to production being frozen," said Timo Wollmershaeuser, an economist at the Ifo institute, one of the think tanks involved in producing the report.

"In this scenario the recession will be deeper and the recovery will be slower. It will also be more difficult for the government to prevent businesses from going bankrupt," he added.

A survey of German companies by the DIHK Chambers of Industry and Commerce showed that four in five expect their revenues will shrink in 2020, and a quarter said business would fall by more than 50%. About 18% said they are threatened with insolvency.

The research institutes said the economy probably shrank by 1.9% from January to March. As Reuters previously reported, they said the German economy is likely to shrink by 4.2% this year and grow by 5.8% next year.
"The coronavirus pandemic is triggering a deep recession in Germany," said the institutes, whose forecasts form the basis of the government`s own economic predictions. They said there was a significant downside risk to their predictions.

The German government is due to present its own economic forecasts on April 29.

DEBT CRISIS RISK
The institutes said an unprecedented stimulus package of 750 billion euros ($814.73 billion) approved last month to mitigate the impact of the pandemic would see Germany`s debt-to-output ratio rise to 70% this year from around 60% before the crisis.

Finance Minister Olaf Scholz, who has vowed to provide additional stimulus for after the pandemic, has said that Germany`s debt ratio could be as high as 75%.

"Germany`s state finances are stable," Wollmershaeuser said, referring to years of balanced budgets, when asked about the risk of the coronavirus pandemic sparking another debt crisis in the euro zone.

"But this risk is there for other countries like Italy. Those countries need support. There is a big risk of a debt crisis in the euro zone. This should definitely be avoided."

Lockdown measures in Germany were causing a crisis of consumption, he said, but foreign demand for German industrial goods should rise once countries ease their shutdowns.

The institutes said the unemployment rate in Germany was likely to peak at 5.9%. They said the number of people on short-time work - a form of state aid that allows employers to switch employees to shorter working hours to keep them on the payroll - is likely to rise to 2.4 million.

That compares with some 1.4 million short-time employees in the spring of 2009.