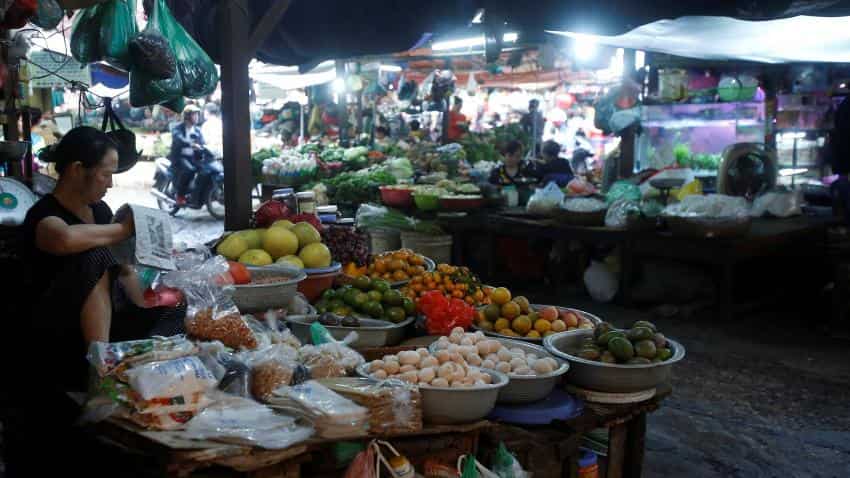 In the previous month CPI had further eased to 3.17% from 3.41% in December on account of lower food prices in India. Image Source: Reuters
Written By: ZeeBiz WebTeam
RELATED NEWS

Consumer Price Index (CPI) inflation or retail inflation for the month of February stood at 3.65%, Ministry of Statistics and Programme Implementation (MOSPI) said on Tuesday.

In the previous month CPI had further eased to 3.17% from 3.41% in December on account of lower food prices in India.

"The uptick in CPI inflation in February 2017 was entirely expected given the unwinding of the base effect, and therefore, does not pose much concern. Moreover, core-CPI inflation recorded a fairly broad-based dip to 4.8% in February 2017, with even services such as health and education displaying a downtrend in inflation," Aditi Nayar, Principal Economist, ICRA said.

Tushar Arora, Senior Economist, HDFC Bank told Reuters,"For the next four months, at least until June-July, we don`t expect inflation number to go beyond 4%. In the first half, trajectory should remain comfortable in our view. It is only in the second half that we expect inflation numbers to go up. Near-term trajectory is quite comfortable. We don`t expect rate cuts anymore. We expect status quo in the foreseeable future."

"Nevertheless, the likelihood of a repo rate cut by the RBI in April 2017 remains subdued, given its focus on bringing inflation to 4% in a durable manner. In fact, CPI inflation is expected to rise to above 4.5% in March 2017, as the base effect continues to unwind and prices of perishables track a seasonal uptrend," Nayar added.

A Reuters poll earlier this month had said that CPI likely picked up for the first time in seven months as food prices were on the rise.

The data polled by 25 economists said that CPI will amount to 3.58% in February.

Retail inflation or CPI that increases due to prices of certain commodities has been on a declining trend since July 2016 where it was 6.068%.

January CPI data was the lowest in five years.

Wholesale Price Inflation (WPI) numbers that were out earlier today also rose higher than estimates to 6.55%

Prime Minister Narendra Modi’s ban on Rs 1,000 and Rs 500 notes in November hurt demand in the largely cash-driven economy and CPI was below the Reserve Bank of India’s 4% target.

"We are now at the floor of CPI. The higher wholesale price inflation will gradually get reflected in CPI. Hence we don`t see any (RBI) rate movement for the foreseeable future," Reuters quoted Indranil Pan, Group Economist IDFC Bank, in a report.