China's People's Liberation Army (PLA) is facing "unanticipated consequences" for its misadventure in eastern Ladakh because of the "firm and strong" responses by the Indian armed forces and the possibility of transgressions and confrontations on the border spiralling into a larger conflict cannot be ruled out, Chief of Defence Staff Gen Bipin Rawat said on Friday. 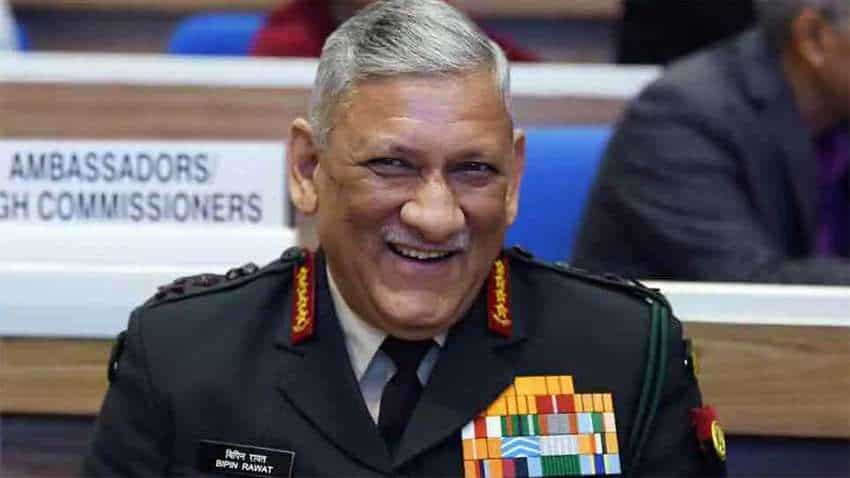 China's People's Liberation Army (PLA) is facing "unanticipated consequences" for its misadventure in eastern Ladakh because of the "firm and strong" responses by the Indian armed forces and the possibility of transgressions and confrontations on the border spiralling into a larger conflict cannot be ruled out, Chief of Defence Staff Gen Bipin Rawat said on Friday.

In an address at a virtual seminar, Gen Rawat said the situation along the Line of Actual Control (LAC) in eastern Ladakh remained tense and that India's posturing to deal with it has been "unambiguous", adding the country will not accept any shifting of the LAC.

"The situation along the LAC in eastern Ladakh remains tense. The PLA is facing unanticipated consequences of its misadventure in Ladakh because of the Indian defence force's firm and strong response. Our posturing is unambiguous and we will not accept any shifting of the LAC," he said

"In the overall security calculus, border confrontations, transgressions and unprovoked tactical military actions spiralling into a larger conflict cannot, therefore, be discounted," the Chief of Defence Staff(CDS) said at the seminar organised by the National Defence College.

"The constant friction with two of our nuclear-armed neighbours with whom India has fought wars, with both increasingly acting in collusion, poses an omnipresent danger of regional strategic instability with potential for escalation, threatening our territorial integrity and strategic cohesion."

The CDS said the "unabated proxy war" unleashed by Pakistan in Jammu and Kashmir accompanied by a "vicious" anti-India rhetoric on social media and efforts to create social disharmony within India have taken Indo-Pak relations to a new low.

"The surgical strikes post Uri terror attack and the Balakot air strikes have delivered a strong message to Pakistan that it no longer enjoys the impunity of pushing terrorists across the Line of Control under the nuclear bogey," he said.

"The new Indian template has injected ambiguity and uncertainty in Pakistan, evident in its media reports, about Indian Armed Forces reaction, if Pakistan sponsored terrorists cross the threshold of tolerance," Gen Rawat added.

The CDS said despite internal problems, failing economy, international isolation and vitiated civil-military relations, Pakistan will continue to "profess" that Kashmir is their "unfinished agenda".

"And its Army will continue to raise the bogey of an existential threat from India to justify its disproportionately large strength and need for funds to maintain its war fighting capabilities," he said.

Gen Rawat said Pakistan has continued to remain the epicenter of armed Islamist insurgency and terrorism.

"For three decades now, the Pakistan Army and the ISI - known as the 'Deep State' have been waging a proxy war in Jammu and Kashmir and are now increasingly resorting to non kinetic means by launching vicious anti India rhetoric on social media and propagating false communal narratives to create social disharmony within India," he said.

Gen Rawat also listed various initiatives to reform the Indian defence forces through a variety of measures including ongoing work on setting up of theatre commands, reforming the procurement process to ensure optimal management of the allotted budget, initiatives to ensure jointness among three forces in training and logistics.

"We are moving towards a Peninsular/Maritime Theatre Command, an Air Defence Theatre Command and three land centric Integrated Theatre Commands for our Northern and Western borders. We are presently in advance stages of firming up the contours of the structures and transformation," he said.

Referring to evolving geo-political situation, the CDS said China, with its ambition of emerging as a global power, is already making inroads into South Asia, Indian Ocean Region (IOR) and especially East Africa through the Belt and Road Initiative (BRI).

"Chinese aspirations are evident in the ever-expanding Chinese military maritime footprints in the Indo Pacific, huge investments in the IOR littorals, and entering into strategic partnerships with a number of countries in the region like South Africa, Egypt, Pakistan and the Association of South East Asian Nations (ASEAN)," he said.

Gen Rawat said the economic slowdown due to the coronavirus pandemic has made China repressive at home but aggressive abroad as is evident through its posturing in South China Sea, East China Sea and the Taiwan Straits.

""For India the challenges have manifested with military flare-ups along the LAC. In the coming years we are likely to witness aggressive pursuit of hegemonic interests by China manifesting through economic exploitation of weaker nations."

About internal challenges, he said the 'Left Wing Extremism' and growing 'urban terrorism' have also contributed towards vitiating India's security environment. With warfare ranging from conventional to hybrid, he observed that the overall security dynamics are replete with strategic unpredictability.

"This gets further compounded by the phenomenal economic and military rise of China and the unique hybrid capabilities of Pakistan and machinations of its Deep State. Equally important is the need to reflect the context in which all these activities are taking place as it affects national interests, undermining our values and ethos, that we mandated to protect," he said.

The CDS observed that the present environment and the future trends indicate a host of challenges India must overcome "to compete, deter, and if necessary, to fight and win tomorrow's wars."

"In addition to conventional war, the challenges in the hybrid and sub-conventional domain are more immediate and of profound concern, calling for an integrated response for which the Armed Forces will require to be duly empowered through technology absorption duly fused with appropriate and right sized organisations," he said.

Gen Rawat said the future civil-military integration will hold the key to a 'whole of nations' approach towards national security. "In the wake of contracting envelope of the defence budget we must look at creating dual use infrastructure through civil military fusion."

He said it has raised a 'Strategic Support Force; that is acquiring capabilities in space, cyber and electronic warfare domain to conduct an "intelligentised" form of warfare.