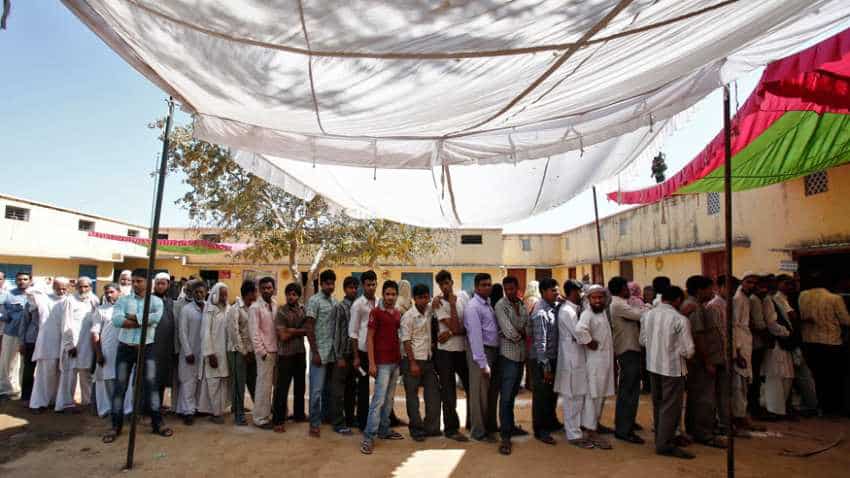 Chhattisgarh Assembly elections 2018: In the first phase, voting was held in 18 of the 90 Assembly seats in Chhattisgarh. Till 5.30 pm, the overall voter turnout was 58.55 per cent, the EC said. Image source: Reuters
Written By: PTI
RELATED NEWS

Chhattisgarh Assembly elections 2018: Around 70 per cent voter turnout was registered in the first phase of the Chhattisgarh Assembly polls, the Election Commission said Monday. The turnout is likely to go up as the final figures are yet to be received, Senior Deputy Election Commissioner Umesh Sinha said.
In the corresponding constituencies, a turnout of 75.06 per cent was recorded in the 2013 elections, he said.

"In 10 of the 18 constituencies which went for polls today (Monday), elections were held up to 3 pm. In the rest, it was up to 5 pm ... Since there were queues in several polling stations, the exact number of votes polled will be known later ... It may match or surpass the 2013 figures," Sinha told a press conference.

Of the 18 seats, 12 were reserved for Scheduled Tribes (STs) and one was for the Scheduled Caste (SC) category. The second phase of polling in 72 seats will be held on November 20 and the results will be announced on December 11.

The polling day also saw an encounter between security personnel and Naxals in Bijapur and a bombing in Dantewada. Five CoBRA personnel were injured in two separate encounters with ultras in Pamed police station area of Bijapur district, police said.

An improvised explosive device (IED) was detonated early Monday morning in Katekalyan area of Dantewada district by Naxals, but no harm was reported, poll officials in Raipur said.