Chetan Bhagat must ''surprise'' readers or he will perish

Chetan  Bhagat seldom surprised readers with his books but his sudden "global deal" with Amazon Publishing, announced Friday, for next six novels came as a shock to publishing insiders. All of Bhagat`s previous books -- nine blockbusters -- had been published by Rupa, the publishing house that introduced him to the literary scene and sold his paperbacks at giveaway prices 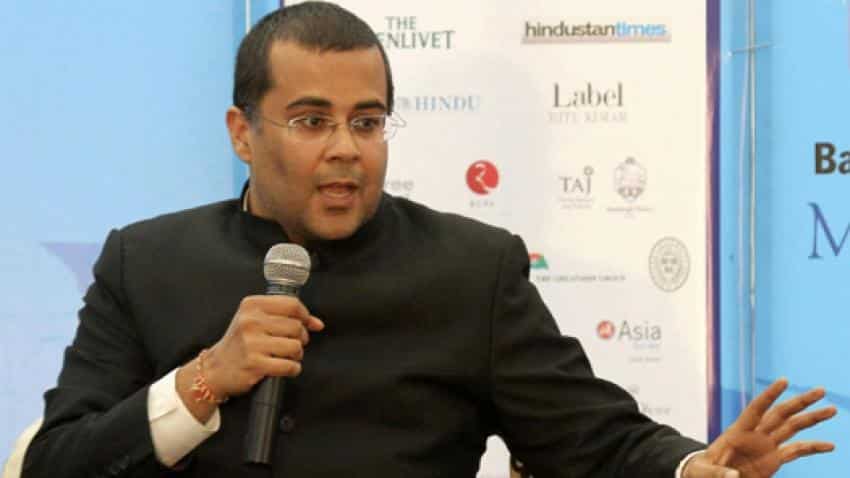 Chetan Bhagat brought a touch of difference in his novels and despite all criticism levelled against him by critics and several heavyweight writers. Image source: Reuters

A writer who was once a phenomenon, literally took Indian publishing by a storm, popularised reading in a magnitude that India had never known before, Chetan Bhagats reputation as a writer has fast crumbled over the past few years. Bhagat seldom surprised readers with his books but his sudden "global deal" with Amazon Publishing, announced Friday, for next six novels came as a shock to publishing insiders. All of Bhagat`s previous books -- nine blockbusters -- had been published by Rupa, the publishing house that introduced him to the literary scene and sold his paperbacks at giveaway prices. He arrived with a bang and soon became a national sensation, selling hundreds of thousands of copies across the country at an incredible pace.

But things were different back then. The Indian novel in English was largely confined to the literary genre and the few light-hearted chick flicks that were being published seldom hit the bestseller charts. Bhagat brought a touch of difference in his novels and despite all criticism levelled against him by critics and several heavyweight writers, there is little denying the fact that his novels connected superbly with the Indian middle-class living in tier 2 and 3 cities.

His over-the-top romance sequences and stories centred in a call centre or the IIT came as a relief to the young population that was fast learning English. His readers bore immense resemblance to his characters; like the protagonists of his novels, many of them were not experts in English but aspired to speak in the language that the world was talking in, they fancied "sex with professor`s daughter" but never spoke of the taboo in public and more than anything else, they wanted to read an English novel that they could easily understand. What good would it do or how wonderful the novel is was the least of their concerns.

And just when this was happening, Bhagat made his presence felt by visiting as many colleges and events away from the metropolitan cities as he could. He was among India`s highest paid motivational speakers at a time but his choice of events always focussed on the tier-2 and tier-3 city population -- his target readers. In a country that has abysmally low literacy rate, Bhagat, if not for anything else, deserves credit for popularising reading in a manner that the country had never seen before. One can easily recall the times when the only English novels one could spot at a book stall on a UP or Bihar railway station would be those by this "paperback king". The popularity multiplied so vigorously that his novels travelled from bookshops to the local ration and even medicine shops!

Nine books down the line, where does Chetan Bhagat stand today as a writer? Not only have his sales dropped significantly but he has also lost his loyal readers, if at all he had many. The reason is simply because most of his readers were of a migrating nature and just as they gained better expertise of the English language and made a better sense of the books available to them, they climbed up the ladder and picked a book, which may have been a step higher than his standard.

Even as this was happening, there was a great churning of Indian writing in English in recent years. Bhagat`s success paved the way for several other commercial authors to rise to fore and on came the likes of Amish Tripathi, Ashwin Sanghi, Anuja Chauhan, Durjoy Dutta, Ravinder Singh and others, who now command the portfolio that Bhagat once prided upon.

Bhagat lost his place because he failed to surprise -- in all of his novels, from the theme to storyline to language and diction, there was a similar line of continuity, as if this was all that the writer had to offer. Commercial fiction always attracts more readers than a literary novel but there has to be different backgrounds, different themes and even different settings to sustain the interest of readers.

And this sudden increase in readership found solace in the writers that arrived after Bhagat`s success. Their protagonists were different; they wove new stories out of old mythologies, they entangled tragedies and conspiracies along with Bhagat`s trademark romance while Bhagat turned from a popular writer to a troll on social media. Even the readers of sex sequences and commercial romance found their new writers in the likes of Durjoy Dutta, who used their charming personality and social media to routinely seduce young readers into buying their books.

All this while, Bhagat was making political statements on Twitter. Trolls, obviously, could not be far behind.

But his just announced "global deal" with Amazon Publishing for the next six books, which includes three fiction and three nonfiction titles, could be game changer in his literary career. They can either re-establish a dying writer or fast propel him into oblivion.

His next book will be releasing in October and given this last minute deal for as many as six books in print e-book and audio formats, the anticipation is high.

Bhagat must surprise his readers this time -- and the wait has already been far too long. At the same time, how well does Amazon fit into the role that Rupa had served so far -- and served excellently well -- remains to be seen. While the content of his book will be discussed much later, it will be the pricing that will be the ultimate factor deciding his sales. Prices of books have increased manifolds and Indian novels are priced anywhere between Rs 350 - Rs 500 on an average today.

Rs 350 for a Chetan Bhagat novel? Readers are going to be watchful.