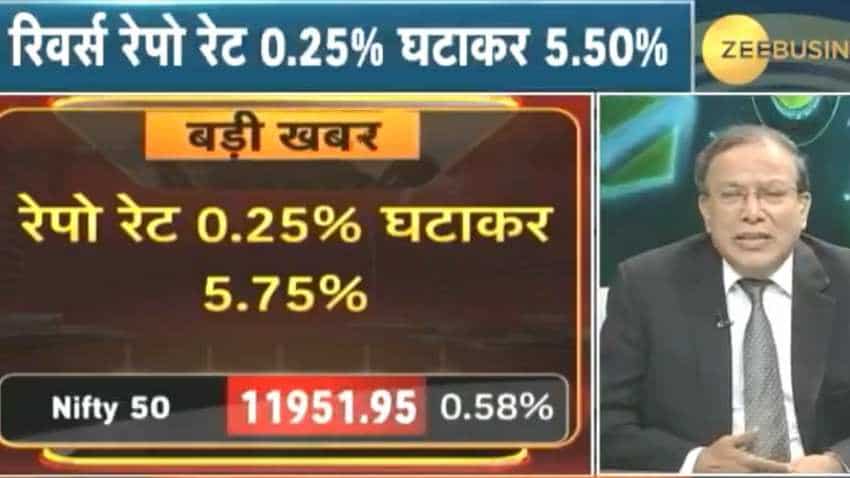 Chaudhuri further added, ''Rate cut of 25 bps was announced in the previous policy too, but there hasn't been any signs of growth since then.

The six-member monetary policy committee (MPC), led by RBI Governor Shaktikanta Das, decided to reduce key repo rate by 25 basis points to 5.75 per cent from 6.0 per cent. The reverse repo rate under the LAF (liquidity adjustment facility) has been adjusted to 5.50 per cent, and the marginal standing facility (MSF) rate and the bank rate to 6.0 per cent. The RBI has also changed its stance to 'accommodative' from 'neutral', eyeing comforting for the market in light of the slowdown.

Ex- Chairman of SBI, Pratip Chaudhuri told Zee Business TV, ''Changing stance to 'accomodative' from 'neutral' is a kind of wishful statement by RBI. The central banks needs to verify, how will the policy behave accomodative in nature. Whether the apex bank has released more cash or decided to increase re-final amount daily. Saying that the stance is accomodative is similar to wishing for growth without any solid instance. Without any impactful steps by the RBI, it is difficult to endorse growth in economy at present.''

Chaudhuri further added, ''Rate cut of 25 bps was announced in the previous policy too, but there hasn't been any signs of growth since then. Meanwhile demand for consumption items like bike and cars is also decreasing in the country. Also there were lack of solid thoughts in the statment to meet NBFC crises in the country, which is one of the most important thing for the whole financial system in order to bring solvency and stability in NBFCs.''

RBI needs to, now ensure that the monetary easing is transmitted to the real economy. While incoming data on monsoon progress, geo-political tensions and extent of uptick in food prices will help RBI take a decision on whether to cut policy rates any further in its next monetary policy on August 7, 2019.

''This is the third consecutive time that RBI has cut rates by 25 bps which shows that they are indeed taking care of the slowing growth and as expected are being supportive by loosening their purse. Indian economy has been experiencing a slowdown with unemployment at 45-year highs, CPI inflation excluding food and fuel down to 4.5% in April from 5.1% in March and a revision by the RBI on the GDP for FY20 from 7.2% to 7% indicates just that,'' said Umesh Mehta, Head of Research, Samco Securities.