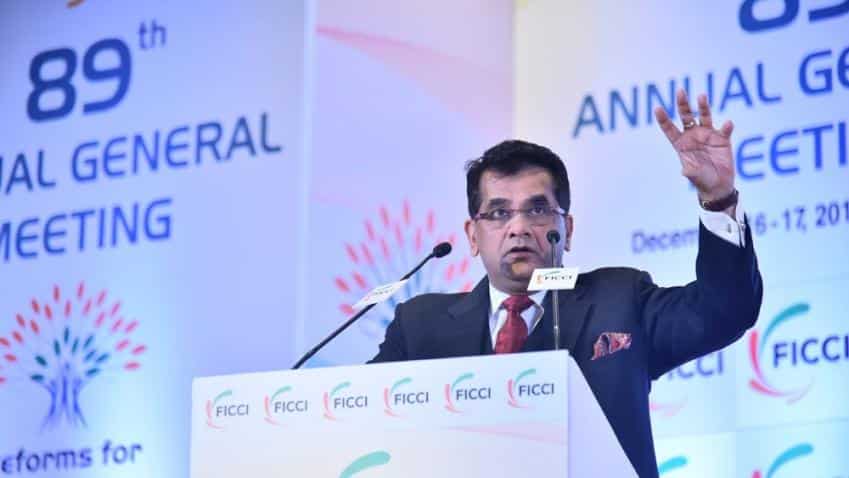 Cash shortage following the demonetisation of high value currency notes will end by mid-January, NITI Aayog CEO Amitabh Kant said on Friday while hinting that cash handling would be dearer in future by way of a cess.

"Various incentive schemes have been provided aimed at promoting digital payments such as 'Lucky Grahak Yojana' and 'Digi Dhan Vyapari Yojna'... The cash handling would be expensive in future by way of a cess and transaction cost on digital payments would be minimal," Kant was quoted as saying by industry body Ficci in a statement.

He further said cash shortages following demonetisation of high value currency notes will end by mid-January by which time about Rs 3 trillion of black money would be sucked out of the economy, leaving about Rs 12 trillion in cash to finance normal transactions.

Disruption in the economy was inevitable after this step, taken as India aspires to have become a $10 trillion economy, Kant said.

He heads the high-level committee set up of the government to identify all possible modes of digital payments across sectors as it pushes on with its drive towards a cashless economy.

"The committee is well on its way towards establishing and monitoring an implementation framework with strict timelines to ensure that nearly 80% of the transactions in India move to the digital-only platform," Kant said.

According to the statement, he emphasised that for sustaining a 7.5% growth, digitisation is important as India cannot afford to have a parallel economy generated by high level of cash transaction.

India is the only economy in the world with 1 billion biometric authentications and 1 billion mobile phones, Kant said, adding that it has the digitisation infrastructure to leverage the JAM trinity -- Jan Dhan, Aadhaar and Mobile.

Noting that Aadhaar-enabled payments was the biggest disruption in India, he said nearly 30 crore people who are without mobile connections can use Aadhaar and thumb impression or Iris connection for digital payments.

In the next six to seven months every smartphone user would be able to make Aadhaar based payment using a device based on inter-operating system, Kant said, pointed out that as India moves towards digitisation transaction costs would come down.

Highlighting various incentive schemes taken by the government to promote digital payments such as 'Lucky Grahak Yojana' and 'Digi Dhan Vyapari Yojna', the NITI Aayog CEO assured merchant-traders that in their move towards digitisation there would be no harassment by tax official by way of scrutiny of the previous years of books of accounts.