The judges dismissed the petition on the ground that it was "devoid of merit" as there were "no restrictions" for operating the bank account by "non-cash transactions". 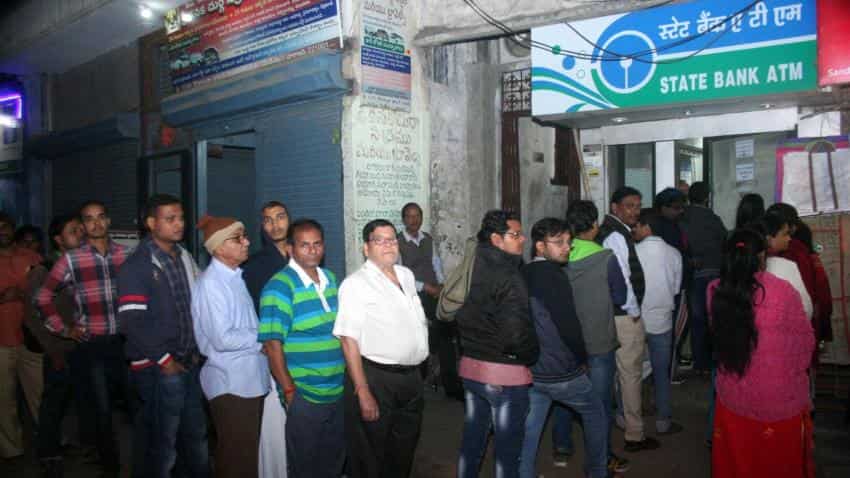 In apprehension of a mad rush at the beginning of next month, people started queuing up outside ATMs for withdrawal of cash to meet expenses for December in Varanasi on Nov 30, 2016. Photo: IANS
Written By: PTI
RELATED NEWS

Restrictions on daily withdrawal of cash by bank account holders is a policy decision which is beyond judicial review, the Delhi High Court on Friday ruled, in a fillip to the Modi government's demonetisation exercise.

The ruling by a bench of Chief Justice G Rohini and Justice V K Rao came on a plea seeking removal of cap on daily withdrawal of money deposited in banks before demonetisation kicked in.

The judges dismissed the petition on the ground that it was "devoid of merit" as there were "no restrictions" for operating the bank account by "non-cash transactions".

"It may be added that the manner in which the decision to withdraw the bank notes of specified amount with effect from November 9, 2016 is to be implemented is a policy decision which is beyond the scope of powers of judicial review," the bench said.

"The law is well settled that the court can only interfere if the policy framed is absolutely capricious or not informed by reasons or totally arbitrary and found 'ipse dixit' (a dogmatic and unproven statement) offending basic requirement of Article 14 (equality before law) of the Constitution of India," it said.

The high court's order assumes importance as the Supreme Court is also seized of the matter related to demonetisation and is hearing a batch of pleas challenging the November 8 notification.

The apex court is also hearing the plea of Centre seeking transfer of all the petitions pending before separate high courts to either the Supreme Court or one of the high courts.

In its order, the high court noted that it was a settled principle of law that courts cannot strike down a policy decision taken by government merely because another decision would have been fairer or more logical.

"The wisdom and advisability of the policies are ordinarily not amenable to judicial review unless the policies are contrary to statutory or constitutional provisions or arbitrary or irrational," the bench said.

It further said that the restriction imposed under Clause 2 (vi) of the notification on capping of withdrawal was "only with regard to cash withdrawal from the bank account over the counter".

The high court said, "Therefore, the contention of the petitioner that Clause 2(vi) infringes the right of the account holder to withdraw from his account on demand is factually incorrect and misconceived".

The court's order came on a plea by Ashok Sharma who had sought a direction to the Centre to remove the cap on daily withdrawal of money deposited by the public in banks before demonetisation of Rs 500 and Rs 1,000 currency notes.

His plea was initially rejected on November 25. However, he moved a fresh application to recall the earlier order on the ground that the Centre had made a "false" statement in the court that the restriction on cash withdrawal of Rs 24,000 by individuals was only till November 24 as this limit has been extended till December 30.

The petitioner had contended that the money which was lying with the banks prior to demonetisation had no connection with the declaration that the bank notes of the denomination of Rs 500 and Rs 1000 shall cease to be legal tender and, therefore, immobilisation of bank transactions of the money deposited prior to it is "illegal".

The court, however, was not convinced with the contention of the petitioner, a businessman, and observed, "Even assuming that the restriction so imposed on cash withdrawal from a bank account has resulted in some inconvenience or prejudice to the petitioner, we are unable to hold that the same runs contrary to section 5(b) of the Banking Regulation Act, 1949."

"We also found that the petitioner's contention that the clause 2(vi) of November 8, 2016, notification shall not be made applicable to the bank deposits of the period prior to it is wholly misconceived.

"According to us, no such distinction can be drawn between the bank deposits of the period prior to November 8, 2016 and after November 8, 2016 since the whole purpose of the restrictions imposed on cash withdrawal for a specified period upto December 30, 2016 appears to be to meet the demand of the liquid cash in circulation in the light of the ban imposed on the bank notes of the denominations of Rs 500 and Rs 1000," it said.

The bench in its order also said that it "does not find any substance" in the contention of the petitioner that the Centre was not empowered to issue such order.