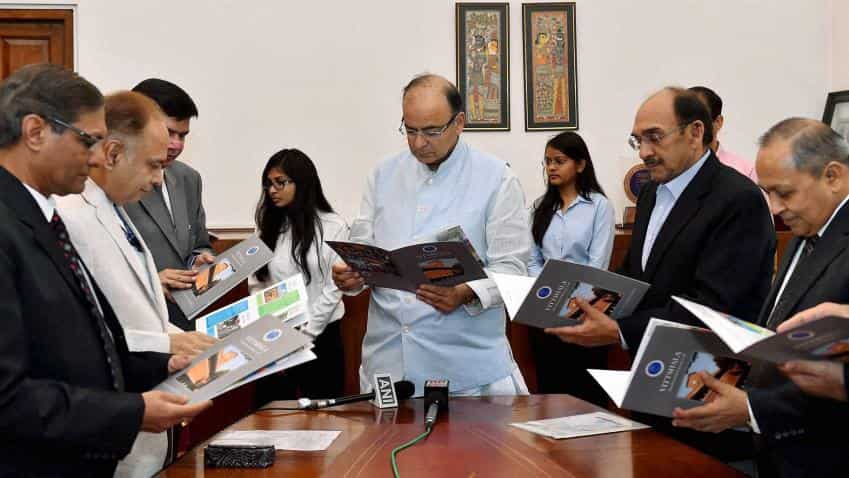 Union Finance Minister Arun Jaitley with Chairman of the Board for SRCC, Ajay S. Shriram and other dignitaries releases the booklet "The Financial Leteracy Cell during the launch of 'Vittshala.' Image Source: PTI
Written By: PTI
RELATED NEWS

The Cabinet is likely to consider this week fixing February 1 as date of presentation of the budget after the Election Commission gave its nod in light of upcoming Assembly elections in five states.

Having decided to advance the budget presentation by a month, the government took the line that it should not be presented in the middle of Assembly poll in Uttar Pradesh, Punjab, Uttarakhand, Goa and Manipur.

So, it consulted the Election Commission, which has concurred with the finance ministry's view that it is an annual financial statement and can come anytime of the government's choice, officials said.

The Cabinet headed by Prime Minister Narendra Modi is likely to meet on Wednesday or Thursday to decide on the date for Finance Minister Arun Jaitley to present the budget for 2017-18.

The Cabinet on September 21 had in-principle decided to end the colonial-era tradition of presenting the Union budget on last day of February and advance it by about a month to help complete the legislative approval for annual spending plans and tax proposals before beginning of the new financial year on April 1.

"The reason we wanted to advance the date was that we want the entire budgetary exercise to be over and the Finance Bill to be passed and implemented from April 1 onwards rather than June because then the monsoon sets in and effectively, the expenditures start in October," Jaitley had stated last week.

Stating that the government wants expenditure to start in April itself, he had said there are five state Assembly elections lined up in 2017.

"So, we are just trying to co-ordinate that you do not have to announce the Budget bang in the middle of an election date. It should be reasonably before that or after that," he had said.

The finance ministry had been proposing that the Budget presentation be fixed for February 1 and the entire exercise be completed by March 24.

It wanted the Budget Session of Parliament to begin before January 25 and go in for a three-week break between February 10-15 before reconvening between March 10-15 to complete the legislative exercise.

But with Assembly elections in five states likely to be held in phases, there is a probability that this budget schedule may clash with the campaigning and the polling.

While tenure of Punjab, Manipur and Goa Assemblies is due to end on March 18, 2017, that of Uttarakhand is till March 26, 2017. Uttar Pradesh Assembly's tenure expires on May 27.

The official said the Election Commission has given a go-ahead with presentation of the Budget as per Centre's wishes.

The Cabinet had last month also decided to scrap the 92-year old practice of having a separate railway budget, merging it with the general budget.

As things stand, the budget approval process happens in two parts spilling over to the second or third week of May, hampering early implementation of schemes and spending programmes.

To facilitate its early presentation, the finance ministry had proposed that the Budget Session be convened some time before January 25, a month ahead of the current practice.

Consequently, preparation for the Budget would start this month and GDP estimates would be made available on January 7 instead of February 7.